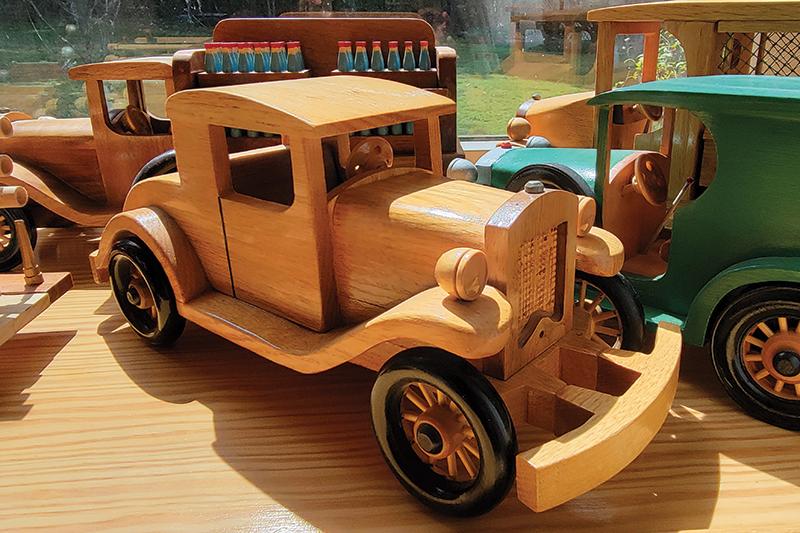 Written and photographed by Lisa Gregory

As a little girl, Mary Cutshaw didn’t get toys for Christmas. Sometimes hard candy or an orange, she says. But never toys.

“If you got shoes on your feet and food in your belly that was the priority,” says her husband, Richard.

Except for that one Christmas when she was 9 years old. The teacher that Christmas instructed the class to write their names on a piece of paper and put it in a box to be picked from later for giving gifts.

Mary couldn’t give so she couldn’t receive. Or so, she thought. 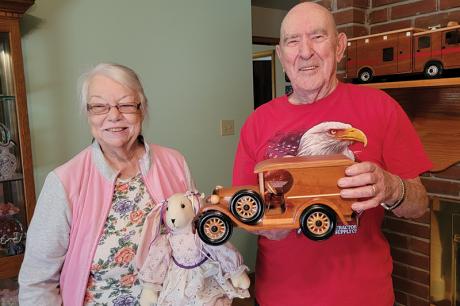 Her teacher, however,  had other ideas. She made sure Mary had a gift of her own. “She gave me a glass bowl with powder in it,”  says Mary. The rose-colored glass bowl has a lid on it with the figure of a  baby fawn. The gift meant the world to Mary and still does. Now, 79 years old, she says, “It has gone with me wherever I have gone.”

Acts of kindness can matter, and matter deeply. Mary knows this better than anyone. So, it is not surprising that she and her husband Richard, who live in Clear Spring, Maryland,  have spent almost two decades distributing  items of kindness of their own. And at Christmas time, since 2002, the couple has donated countless handmade wooden toys, such as  cars and train sets, to the  Marine Corps Toys for Tots program in Washington County.

Working in his workshop with its impressive array of tools, including radial, table, and band saws, Richard makes the handcrafted wooden toys. Then Mary paints them, including the Weeble-like people from the train conductor to the person driving the car. Richard signs, dates, and numbers each one and just this past Christmas more than 600 local families received one of the toys through Toys for Tots.

“He puts his heart and soul into doing this,” says Diane Dutrow, coordinator for the Washington County Toys for Tots program.

He and Mary are not alone in their generosity, says Dutrow. “A lot of the businesses around here will ask for donation boxes and will fill them two or three times,”  she says. 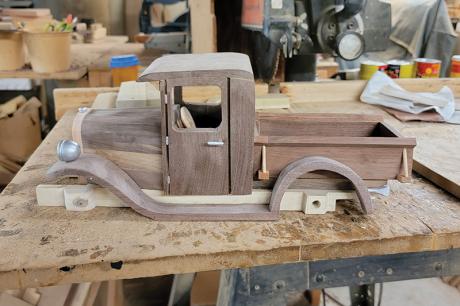 Richard, 84, who spent 33 years as a surveyor with the state of Maryland before retiring, has long enjoyed woodworking. “I took wood shop in junior high and high school,” he says.

He also had an uncle who was a talented wood craftsman as well. “He couldn’t read or write,” says Richard. “And he didn’t talk very much.”

But he could create beautiful things from wood. As does his nephew.

Step into the Cutshaw’s home and you will discover a wonderland of wooden handmade items. Richard’s handiwork through the years for his own home and family as well as others has included cradles, rocking horses, bird houses, china cabinets, deacon’s benches, and much more. “Every room in this house has a piece that I made,” says Richard.

And nestled among  these  items is a plaque, a Commander’s Award  from the U.S. Marine Corps Reserves, acknowledging the couple’s work and generosity in providing countless children with toys through Toys for Tots.

“I surprised him with it,” says Dutrow, who presented the plaque to Richard and Mary last year. “It brought him to tears. He was not expecting it at all.”

After years and years of making the toys and donating them, more recently, Richard has hinted at putting away the saw, as it were. Not likely, says Dutrow. 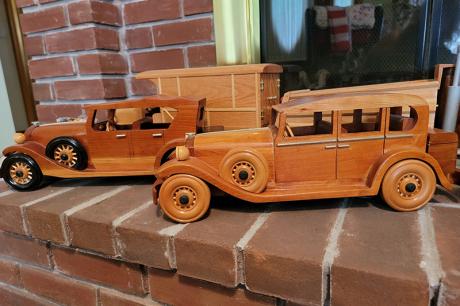 “For the past two years after he’s donated,” she says, “he’s like, ‘Well this is probably my last year. I’m up in age and you know my wife is like you really should just take some time off and enjoy life.’ And then the following year I get a phone call saying, ‘I got boxes of wooden toys for you.’ It’s great to receive them every year.”

But the giving doesn’t stop with Toys for Tots. Richard has wooden handmade toys at the ready when he and Mary are out and about. And not just during Christmas. “If I see a little kid in a store, I will go out to the truck and get them a toy,” says Richard.

Many times, the child is just delighted to get an unexpected  toy. But the parents, says Mary, often understand the value of the gift.

Richard hopes the child will walk away with the notion, “That somebody made this just for me,” he says.  “And to respect their elders.”

Richard and Mary are also eager to reward others who try to do good, as well.  No matter their age.

“We saw a newspaper article a few years ago about a little girl in Hagerstown who had put out a lemonade stand and sold lemonade,” recalls Mary. “She was raising money to help her neighborhood. And, we thought it would be nice for her to get something. To know that someone appreciates her, too.”

Richard made her a handmade cradle for her dolls with Mary, who also makes dolls, including Raggedy Ann and bunny dolls, sewing a blanket and pillow and mattress. Then Richard and Mary asked the pastor at the little girl’s church to pass on their gift. “We never met her,” says Mary. “But that didn’t matter. We just wanted to do something for her.”

And Richard made sure that Dutrow was not left out when it came to handing out toys either.

“He actually surprised me last year,” says Dutrow. “He had made the delivery of all the boxes with the toys in them and we got to talking. I was telling him how I loved the train sets he does.” 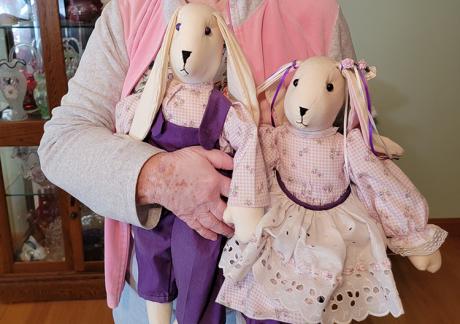 “He called me one day and he goes, ‘Can you meet me at the store?’” recalls Dutrow of the Toys for Tots store. “And I said, ‘Sure.’ I went over and met him there and he walked to the side of his truck and pulled a bag out and he goes, ‘Here, this is for you.’ And it was a train set. I was so happy to get one. I was like, ‘Oh my gosh, I’m so thankful. Thank you.’ I actually have it displayed on a bookcase in my living room.”

Rodger Alexander, who has known the couple for many years,  has a toy car, which was handmade by Richard. A gift from the couple. He considers it a prized possession.

“It’s local,” he says. “Someone local here made it. And there’s not another one. It’s all handmade and the only one. And it doesn’t’ say made in China on the bottom of it.”

As for the toys Richard makes for children, “He just loves kids,” says Alexander.

The couple are even bringing joy to little ones who may yet come. One young man who received a train set from them sent them a thank you note, writing, “You do beautiful work. My wife and I are proudly displaying the train set for Christmas until we have children to enjoy it.”

And with Christmas fast approaching, this year’s batch of handmade toys is ready and waiting for excited boys and girls. But Richard isn’t taking a break despite his comments otherwise.

“I’ve already been working on the toys for next year,” he says with a grin.