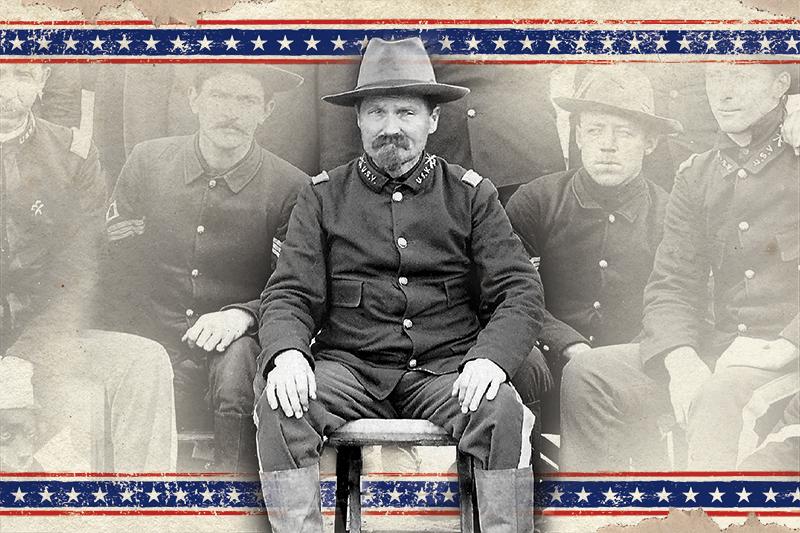 SIX months a prisoner of war, FIVE decades of service, FOUR wars, THREE years in the Army of the Potomac, TWO veterans’ organizations and George Fisher had ONE more job to do.

There are very few veterans who are known to have served in uniform in both the Civil War and World War I, which America entered 53 years after Appomattox. Of these few men, none left as thorough a photographic legacy as Hagerstonian George Leonard Fisher. Although his passing in 1927 was significant news locally, his photo-graphic legacy has largely gone un-noticed. Until now.

Born in Bavaria in 1846, George emigrated with his parents through the port of Baltimore in 1854, aboard the ship Weser. The Fishers settled in the remote farming community of Buck Valley, Fulton County, Pennsylvania.

In August of 1862, Fisher took the first opportunity he had to enlist in the cause of his adopted country when he enlisted at Hagerstown in Company A, 7th Maryland Infantry. The young recruit was 5 feet, 4.5 inches tall, with a fair complexion, dark eyes, red hair, with an occupation listed as “carpenter.” He was three months shy of his 16th birthday. 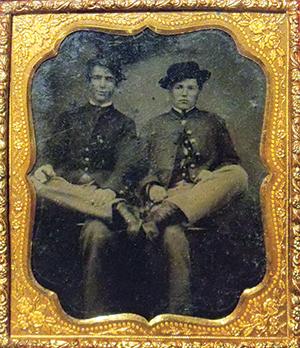 The 7th became part of the famed “Maryland Brigade.” They missed the Battle of Antietam as they were in training in Baltimore. They arrived in Hagerstown soon thereafter, garrisoning the C&O Canal and the B&O Railroad until the following June. The boys of Company A had the good fortune of being deployed in their own community.

The only blemish on Fisher’s long record came on June 1, 1863, when he and several of his comrades from the 7th were accused of engaging in a riot in Bolivar (West) Virginia and were tossed in the guardhouse in Harpers Ferry. A court martial was convened, but no record of a verdict or punishment has been found.

The Maryland Brigade missed the Battle of Gettysburg, but on July 10, the brigade was assigned to the veteran First Corps of the Army of the Potomac and joined Meade’s force along the Sharpsburg Pike, south of Hagerstown. The brigade fought in the July 12th battle at Funkstown. Afterward, Fisher and his comrades passed a relatively uneventful fall and winter.

In March, 1864, the Maryland Brigade transferred to the bloodied 5th Corps. From the beginning of May through August 1864, the Marylanders shared the same laurels as the rest of that hard-fought corps: Wilderness, Laurel Hill, the “Bloody Angle” at Spotsylvania, Cold Harbor, Bethesda Church, and the first assault on Petersburg. Fisher was among the fortunate. The now 17-year-old veteran emerged unscathed.  His luck would soon change. 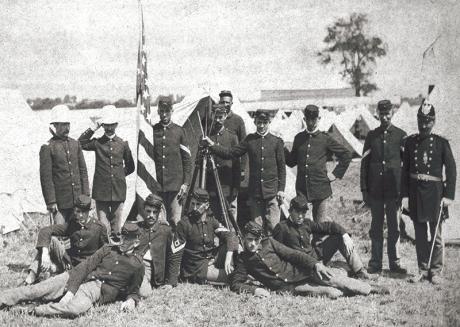 In September, in a little noted skirmish, Fisher and five others were captured when their picket line was overrun near Weldon Railroad, Virginia. Confined for a week at the infamous Libby Prison in Richmond, he was sent on to his final point of captivity at Salisbury, North Carolina. Fisher later noted in a pension application that upon his arrival at Salisbury “I was forced to sleep in a hole dug in the ground.” And there, he spent the coming winter.

The Salisbury camp was closed in February, 1865 and almost 4,000 inmates – including Fisher – were exchanged.  Fisher received a furlough but rejoined the 7th in time to muster out with his regiment at Arlington, Virginia, on May 31. When he returned to Hagerstown, Private George Fisher was a hardened veteran of nearly three years of continuous service and six months as a prisoner of war. And still six months short of his 19th birthday.

After a year working as a boot maker in Hagerstown, Fisher returned to the military life. He enlisted in the regular army for three years. Assigned to Company A, 2nd U.S. Infantry, he reported to Crittenden Barracks in Louisville, Kentucky. As a hardened Civil War veteran, he earned rapid promotion to First Sergeant. While in the Bluegrass State, he married Irish immigrant Margaret Handley (1844-1911). A son, George Michael, was born in 1868.

The 2nd regiment was transferred to Georgia in 1869 (at the height of Reconstruction) as a garrison force, maintaining order, enforcing election and reconstruction laws, and assisting U.S. Marshals and revenue collection agents. Fisher re-enlisted twice in 1869 and 1874. A son Thomas was born in Montgomery, Alabama in 1871, but lived only a year. Their third and last child, Mary Barbara, was born in Atlanta in 1873. The companies of the regiment deployed separately around the lower south to counter unrest associated with the Hayes – Tilden presidential contest of 1876.

In July, 1877, the regiment was ordered to the Idaho Territory due to hostilities erupting with the Nez Perce tribe led by Chief Joseph. Company A arrived in Lewiston at the end of July. In two years, Fisher and his company participated in the campaign versus the Nez Perce, began construction of Fort Cour d’Alene (later renamed Fort Sherman) on the Spokane River, and were involved in actions with the Bannock and Paiute tribes. Now in his 30s, with a wife and two children, First Sergeant Fisher declined a fourth enlistment. He was dis-charged at Fort Coeur d’Alene on July 10, 1879.  The family assumed a more stable life in Hagerstown.

Gaining employment with the Cumberland Valley Railroad at its Hagerstown depot, Fisher was an active member of the Lutheran Church, several fraternities, and the Pioneer Hook and Ladder Company. He served as a mentor and instructor to a local boys’ military drill club and as a scoutmaster to Washington County’s first troop of the Boy Scouts of America. He served a term as commander of Hagerstown’s Reno Post #4 of the Grand Army of the Republic (a Union veterans’ organization) and was an officer in the Cumberland Valley Volunteer Firemen’s Association. 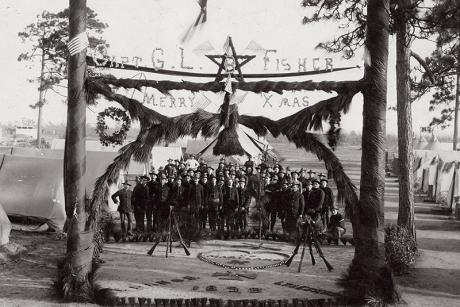 He also enlisted in the Hagerstown Light Infantry – a new company of the Maryland National Guard recruited by former Confederate major (and Stonewall Jackson staff officer) Henry Kyd Douglas. The well-experienced Fisher received a lieutenant’s com-mission in 1888. By the time the company mobilized in 1898 for service in the War with Spain, Fisher was the company’s captain and commanding officer.

The company mustered into the 1st Maryland Infantry, U.S. Volunteers, under Hagerstonian Col. William Preston Lane, Sr. at Pimlico Race Course on April 25, 1898. A true example of the reunited nation, the regiment included veterans – and the sons of veterans – of both the Blue and the Gray. The Marylanders missed combat due to the brevity of the war and the 1st Maryland mustered out at the end of its 10-month mobilization at Camp MacKenzie, Georgia in early 1899.

Viewed by his superiors as “the most efficient company commander of the regiment,” Fisher retired from the Maryland National Guard in January, 1911. In 1908, his was the first name listed as a member on the charter of Hagerstown’s Joseph C. Byron Post #3, United Spanish War Veterans. He later served as commander of this post as well.

After six years adjusting to an entirely civilian existence, the nation called on Captain Fisher once more. In August, 1917, with the national guard mobilized and sent to Europe, the state government formed the “Maryland State Guard.” This was a volunteer reserve force that carried out the National Guard’s domestic responsibilities while they were overseas. This body exists today as the “Maryland Defense Force.” 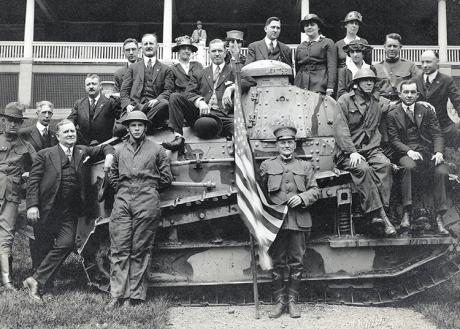 The 71-year-old captain was called out of retirement to serve as a drill instructor for the State Guard. Thus, he became one of only a very few Civil War veterans to serve in any uniformed capacity in the First World War.  He also promoted local “Liberty Loan” campaigns. The war hit the Fisher family hard when word was received that his son-in-law, an army doctor in the 77th Division, was mortally wounded in the last month of the war at Chevieres, France. For giving his life attempting to rescue a wounded soldier trapped between the lines, the doctor was awarded the Distinguished Service Cross.

Even with such a sterling service record to look back upon, Captain Fisher had one last mission to perform for his country.  On May 14, 1927, he was appointed the 14th Superintendent of Antietam National Cemetery. Fisher was the last Civil War veteran to serve in this post. This appears to be a largely administrative or ceremonial appoint-ment as he was 80 years old. His pension records show he was quite enfeebled by this time and required the daily attention of others. 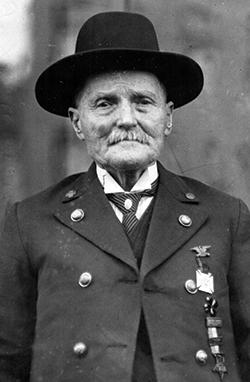 In December, he took a tumble on the streets of Sharpsburg, retired to his home, took to bed, and passed away on Christmas Eve, 1927. His passing was covered widely in the Hagerstown press. Numerous memorials were published in the local newspapers for days after his passing, including this from one of his men:

The Captain was more than a soldier.  His long service in that line, his sacrifice to his country, his efficiency, his loyalty, all attest to him as a good soldier. But I know him as a man – as a Christian!  In service, in camp, he was like a father to us. There was no gulf between the officer and the private. Many a time when we were relieved from duty for a little recreation, he would admonish us to remember our uniform and the flag, and not to do anything that would besmirch the soldier or drag the flag in dishonor.

The soldier’s rest finally came…not in the National Cemetery that he served in his final days but in the community in which he was raised. He was laid to rest at the Buck Valley Zion Lutheran Church in Fulton County next to Margaret and Thomas.

This article originally appeared in the Autumn, 2017 issue of Military Images Magazine, which graciously allowed us to reprint an abbreviated version of it for the benefit of the Hagerstown community.