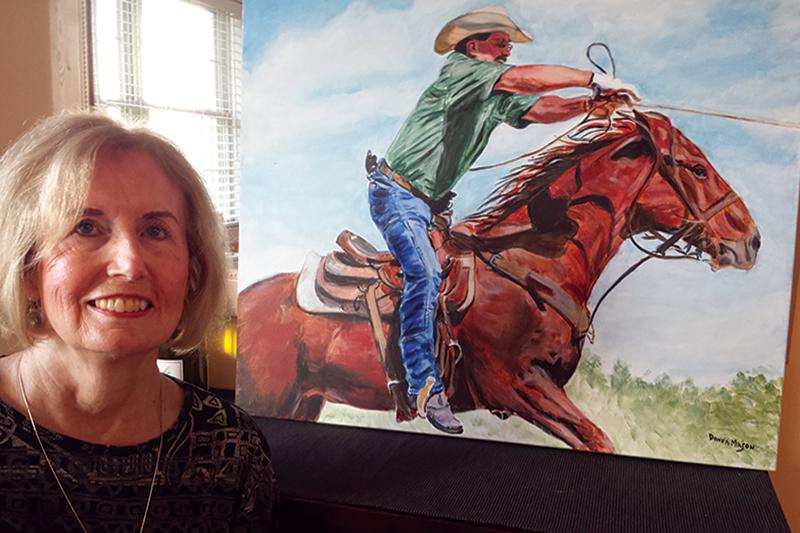 Donna Mason, who became a painter late in life, is part of the Valley Art Association’s “Winter Wonderland” exhibit.

By Crystal Schelle and photos courtesy of Donna Mason

Although her father was an artist himself, Donna Mason didn’t pick up a paint- brush until 2001. “Surprisingly, I didn’t take art up in high school,” said Mason, 77, while sitting on the porch of the Mansion House Art Center and Gallery in City Park. “But it was always there in the background. I always wanted to be like my dad.”

She said her father mostly drew and often used pastels. He used his talents working for an advertising company where his artistic talents were called on for the company, including a cartoon that is on a drinking glass she still owns.

In 1992, Mason retired from Bell Atlantic but continued at a variety of jobs to keep her busy, including selling Weekenders Clothing. Mason was newly remarried to Hal Mason when she spotted a newspaper article mentioning that artist Elisabet Stacy-Hurley was offering painting lessons.

For about three to four years, Mason took classes with Stacy-Hurley, who also is a member of the Valley Art Association. Mason credits Stacy-Hurley for giving her the foundation of being an artist. 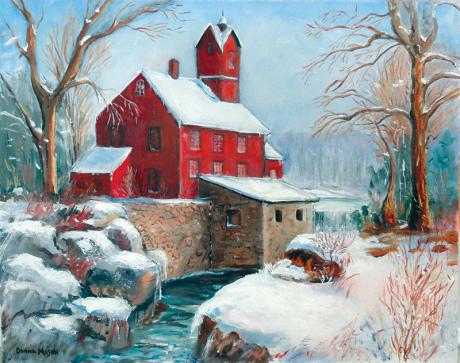 “I sold my first painting at her clothesline sale. I was so excited,” Mason said, guessing it was about 2002-2003. “And she said, ‘Now, Donna, you can consider yourself a professional artist.’”

Soon after, Mason joined Stacy-Hurley at Valley Art Association where she’s been a member ever since. Previously Mason held the title of vice president for the VAA’s board of directors at the time when notable local artist, the late Clyde Roberts, was president. Currently, she is president-elect, while her husband, Hal, is now president of VAA.

“Hal isn’t an artist, but he never knew you that didn’t have to be an artist to join,” she said, noting he’s a retired engineer. “I said, you know our motto is ‘Art for Everyone.’”

This summer, one of Hal’s pieces was hung alongside his wife’s at the Mansion House as he has taken up painting as well.

Valley Art Association is made up of about 120 members who have an interest in the arts —  from painting and pottery to knitwork and writing —  or just an appreci- ation of the arts in general. Mason said their members are mainly from the Tri-State area with additional active members scattered all over the country who keep in touch thanks to Zoom meetings.

The organization oversees the Mansion House where they exhibit and sell their works to the public. Mason estimates there are about 20 artists at a time who take turns exhibiting at the Mansion House as well as volunteer at the gallery. 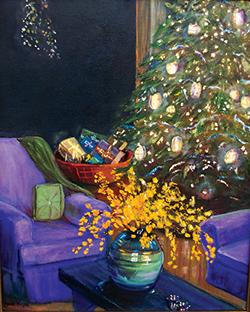 “We try to do some-thing that pertains to the season,” Mason said of the exhibit’s theme. Mason’s work will be part of that exhibit, which opens December 3 and runs through Januaary 30. Between 25 and 30 pieces by VAA members will be on display.  Mason expects to submit four of her own paintings for the show.

“But I find myself holding back from putting in very many so that some of our newer members can put pieces in,” she said. “They’re brand-new artists and they’re really excited about putting in their work.”

Although Mason started painting using oils, she made the transition to acrylics when she was asked to teach a class at a senior center. Now she uses what is called open slow-drying acrylics, which stay “open” or wet longer for the artist
to manipulate the painting over a period of time.

“You can use them exactly like oils, except they’re water based, and you don’t have all those toxins,” she said. Recently, though, she said she’s “been fooling around” with Pan Pastels, a specific type of pastel that can be used like paint.

When it comes to her subject matter, Mason works off a combination of photos and her imagination to create her scenes. She researches the subject matter and does some pre-sketches before she puts brush to canvas. That is if she is painting for herself or for her commissioned works. Although for commissioned works, her clients usually have an understanding of what they want. For instance, she recently was asked to paint a series of poppies for a man’s entryway.

When it comes to canvas size, Mason prefers large pieces of work but her average size is 16-by-20. 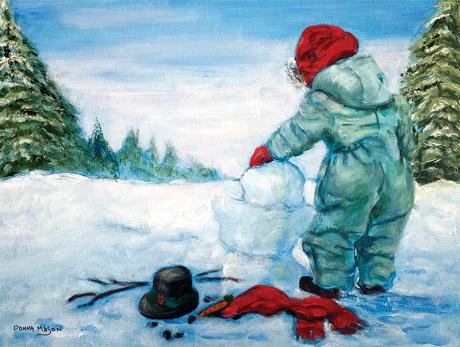 “I prefer really big ones, but they take longer obviously,” she said. “I’ve got some big ones on the wall right now but oh, they’re fun to do.”

“It was from the scene up in New York and it was a winter scene. So I had to paint that,” she said, noting that it became the painting “Wintry Wishes.”

Another painting where children are playing in the snow was inspired by a photo. She found another photo with a child facing another way to help her perspective. Then she decided to put one of the children in a snowsuit for her finished piece “Winter Wonderland Builder.” Another painting featuring a snowy sunset was inspired by watching a TV show with a similar image, and then took her own photo in City Park. That piece is titled, “Low Winter Sun.”

When it comes to her work, Mason enjoys the process of creating.

“I paint for the pleasure of painting. I really do,” she said “I’m not making a living. I don’t need to make a living.”

She hopes visitors to “Winter Wonderland” will have “the same love and passion for art that many of us have.”

Those who have an interest in art of any kind are encouraged to become a member of VAA, Mason said. The association collects yearly dues. More information can be found at  http://www.valleyartassoc.com