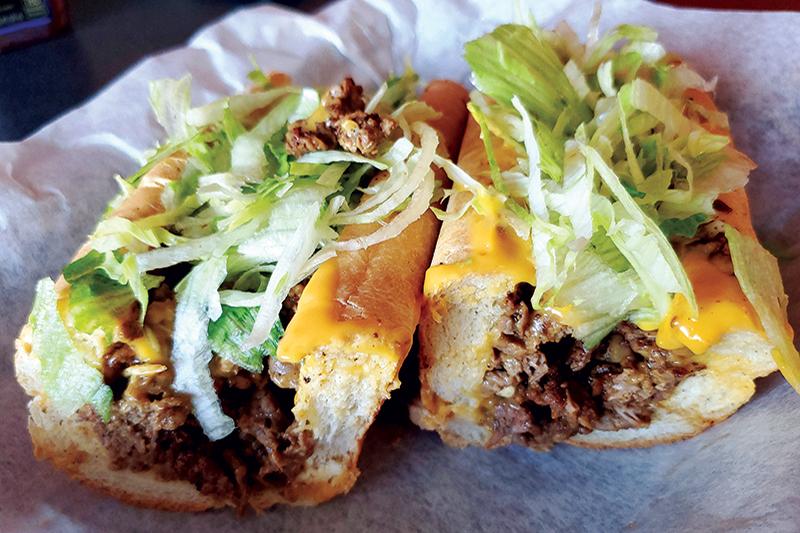 Authentic Hoagies and Cheesesteaks reign at the Philly Sandwich Company.

Story and photography by April Bartel

You can’t go to Philadelphia and not try the cheesesteak. It would be like visiting Maryland and not sampling a crab cake or two. Sacrilege.

Indeed, it seems like the world knows about the great dispute between devotees of Pat’s King of Steaks versus fans of rival Geno’s Steaks for “Best Cheesesteak” title. The iconic kitchens stand just a few feet apart in an area known as the Italian Market, so it’s easy enough to buy one of each and do your own taste test while in town. There are dozens of other local favorites, too, each with its own spin on the classic: Thinly sliced beef topped with a schmear of Kraft Cheez Whiz and sweet griddled onions (“wiz, wit”), piled onto a chewy footlong Italian roll. But if you crave a bite of the City of Brotherly Love’s signature fare without the three-hour drive, the Philly Sandwich Company at 11347 Robinwood Drive has you covered.

South Philly native Chris Marquez opened the place in September 2019. Cooking cheesesteaks was his first job as a teenager. And, after decades of experience as a classically trained executive chef, personal chef, business owner, and former CDL driver, the Philly Sandwich Company is a return to his roots. The strip-mall space was vacant when he first saw it, but he knew it would be the perfect spot to share some of his childhood favorites because of its two large bay windows. “They remind me of the row houses where I grew up,” says Marquez through the curl of a smile. “A lot of the delis and restaurants in South Philly are in people’s homes.”

The place fills a very particular niche. “I realized that you can’t find a good cheesesteak in town,” says Marquez, who moved to this area in 1992. He quirks an eyebrow for emphasis, “You can’t. You can’t find a real good Italian hoagie. That’s the food I grew up on. That’s why I did this.”

Authenticity is the rule here. It applies to food and people. Marquez explains, “In other parts of the city people say, ‘I’m from Philadelphia,’ but in South Philly we say specifically, ‘South Philly.’ It’s very famous.” 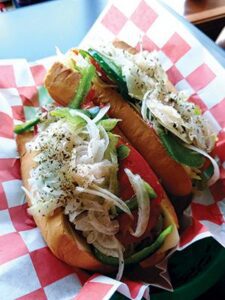 At first pass, Marquez is a no-nonsense kind of guy, with an intense gaze as sharp as his work ethic, but ask about his food and the love bubbles over.

“I use Dietz & Watson,” says Marquez of the deli meat and cheese, a hometown favorite since 1939. “I get that straight from Philadelphia every week, so our meats are top-of-the-line. For our chicken and cheesesteaks, it’s all fresh meat from Phil and Jerry’s in Smithsburg. We slice it up ourselves. It’s 100 percent top round. We do not use frozen meats. All of our vegetables are fresh.”

And the bread? “There are a couple of well-known bakeries in Philly. But the only way you get it here is frozen. If people around here say, ‘we use Amoroso rolls,’ they probably do, but it’s frozen. We don’t do that.” The shop gets freshly baked hoagie rolls delivered every morning at 6 AM from a Philadelphia-based baker with a satellite in Baltimore. The result is a tender-yet-chewy loaf of golden goodness that stands up to whatever pleases you to pile on it.

In addition to classic Cheesesteaks, with Cheez Whiz or any other cheese you like, the menu reads like a visitors’ guide to South Philly hotspots and hometown heroes.

The Mighty Mick – with turkey, ham, cheddar, Swiss, salami, lettuce, tomato, onion, deli mustard, and mayo – checks in at Mighty Mick’s gym from the movie Rocky. The spicy number with capicola, provolone, and pepperoni, a.k.a. the Passyunk Ave., is named for the street where Marquez grew up. It’s also home to the venerable Italian Market. “That is where all the stores are,” recalls Marquez. “We didn’t go to the grocery stores usually. We’d to go to the butcher or the bakery. We get ravioli from the pasta shop.” 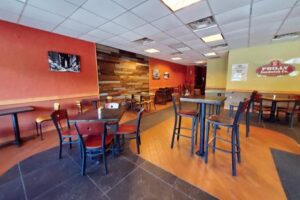 The Italian Market hoagie and Bada Bing, a cheesesteak with mushrooms, peppers, and onions, are the top sellers. Marquez estimates the Philly Sandwich Company’s galley kitchen has turned out more than 10,000 Cheesesteaks since opening, despite a 70 percent dip in sales throughout the pandemic. “We probably made well over 4,000 Italian hoagies. I make gallons of cream of crab soup every weekend and we always sell out of that.”

Regular customers know, if Marquez has the ingredients, he’ll make anything you want. With his background as a chef, that says a lot. “I have made jambalaya and filet mignon for people. I make all the Italian specialties, chicken pesto or saltimbocca. Just give me two days’ notice.”

He points to the family-style catering menu. Folks can order trays of Italian specialties, channeling Marquez’s own heritage, like lasagna, manicotti, shrimp scampi, or chicken parmesan, or other favorites such as beef tenderloin, meatloaf, roast pork with brown gravy, or chicken marsala. It’s a popular option that’s handy for holiday parties, game nights, and busy families.

Marquez is especially proud of the meatballs, which star on the menu every Wednesday. “It’s my great grandmother’s recipe. I’ve been making those with my grandma since I was 5 years old. My job was to roll the meatballs.” Now, Marquez does the prep, starting with grinding fresh steak, while sandwich artist Kodjo “KJ” Akakapo hand rolls each savory 3-oz. monster that is as big as some burgers. They simmer in house-made “gravy,” a luscious reduction that starts with Italian plum tomatoes and fresh basil, and can be ordered by the dozen or as a hoagie.

Customer Dave Rhodes recalls the first time he tried one. “He put a couple meatballs in a cup for me to sample. I figured I’d take one home to her,” he says, motioning to his lunch companion, Chris Taylor, “but it didn’t make it out the door. I ended up walking out with a meatball sub in addition to what I had already ordered.”

Rhodes discovered the Philly Sandwich Company months ago, now he’s a regular. “I’m here every week, at least once.” 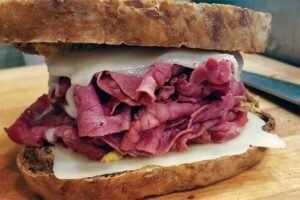 To which Taylor responds playfully, “it’s usually like three times a week, because we love the subs.” Her favorite is the Rittenhouse Square with roast turkey, provolone, mayo, and veggies.

Rhodes goes for the Bada Bing or Italian Market with Black Forest ham, provolone, Genoa salami, capicola, and pepperoni dressed with vegetables, spicy Italian pepper relish, oil, and oregano. “You walk in after a long day at work and KJ and Chris are here. You start just talking and sharing your day.”

Marquez nods, sporting the biggest grin. “That’s why we like the open kitchen. People can see the fresh food and how we make it. It lets us talk back and forth and get to know people.”

In the six months between opening the Philly Sandwich Company and COVID-19 shut downs, lines were out the door. Now, the large dining area remains mostly empty as customers overwhelmingly opt for take-out, even though tables are disinfected after every use. Like most independent restaurants, the pandemic hit hard. “That killed everything,” says Marquez, “but we stayed open. We never closed one day. That was really important because I wanted to be there for my regular customers. We have that relationship and that makes all the difference.”

That’s the way they do it in Philly.