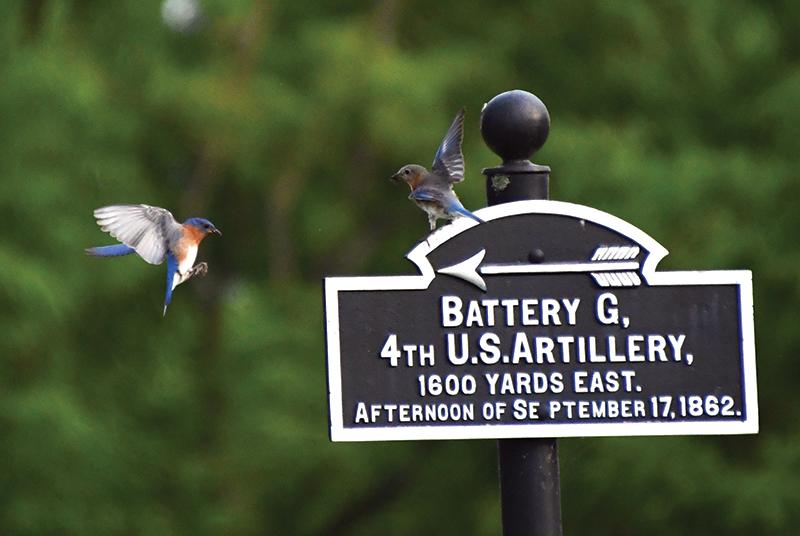 Hagerstown Couple documents the story of the “Bluebirds of Antietam”

As Stefanie Boss and her husband, Mike Reed, walk down Smoke-town Road on the Antietam National Battlefield property, a bird with bright blue feathers, a rusty-colored breast, and white belly darts from its perch on the wooden fence to the nearby trees.

“They tend to be a little skittish,” Boss says of the Eastern bluebird that flew out of sight.

Although Antietam National Battlefield is bustling with tourists on the late July day, taking full advantage of the weather to snap photos of monuments or read signage, most won’t notice the 100 birdboxes that are scattered throughout the battlefield.

However, Boss, 71, and Reed, 76, of Hagerstown, want as many people as possible to know about the bluebird trail that runs throughout the battlefield, and that’s why they made their 24-minute documentary “Bluebirds of Antietam.”

Even though Reed was a volunteer at Antietam, he hadn’t paid much attention to the birdhouses either. That was until one day in 2010 when he was at the battlefield’s West Woods and had a chance meeting with Mark and Jean Raabe. He watched them pull their car up, jump out and go to a birdbox in a nearby field before getting back into the car. Reed asked him what they were doing and Mark explained that he was checking to see how many eggs were in the bluebird’s clutch. They hurriedly got back in the car and went onto the next box. Reed discovered that their quick reply was because they had 100 boxes spread across the battlefield to check that weekend.

“That’s what got our curiosity going,” he said.

The Raabes lived in Alexandria, Virginia, but had a cabin near the battlefield. It was one day when Jean noticed a bluebird that piqued their interest. They started with a few boxes in their backyard before entering into an agreement with the National Park Service to place boxes throughout the battlefield’s grounds. The battlefield’s open meadows and large trees offered the right home for the bluebirds to thrive. 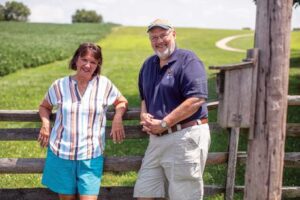 As they found out more about the Raabes’ story, Boss and Reed would discuss how they could shine a light on the bluebird box trail and the Raabes. Then the Maryland International Film Festival-Hagerstown started in 2011. Reed had always been a lover of movies and when the festival began they began to be regular attendees. It also kept their love of the arts alive.

“We did theater together up until we retired and moved up here,” Boss said, noting they moved from Silver Spring to Hagerstown about 14 years ago.

Finally, her mind settled on those bluebird boxes. She reached out to the Maryland Bluebird Society’s then-president Kathy Kremnitzer who told them that the Raabes had been doing it since 1979. And over that time, they had fledged more than 10,000 bluebirds.

“There was nothing about this anywhere. Nobody knew this,” Boss said. “I thought, How could someone do this for 35 years and not get some kind of recognition for it?”

Boss decided she was going to make sure that someone knew about the bluebird box trail, the Rabbes, and what the project has done for the Eastern bluebirds. Although she and her husband didn’t have filmmaking experience per se, they were veterans of theater in Washington, D.C., where Boss spent her time with the Screen Actors Guild and was on many movie sets herself before retiring. Reed worked for the National Institutes of Health but said he “kept my sanity” as a stage actor.
They knew they needed someone with actual filmmaking experience to help them, that’s how they tapped award-winning director Conrad Weaver, whom they met at the festival, to be part of the project.

Preproduction began in 2018 with Boss as producer, Reed as the narrator, and Weaver behind the camera.

Although Jean passed away in 2017, Mark was still living in Alexandria and willing to take part in the making of the movie. Boss then reached out to other experts, and was able to even interview John Howard, former Antietam National Battlefield superintendent who had supported the bluebird box trail. 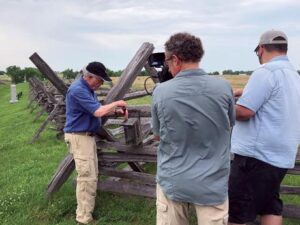 “I was just happy that I got to tell their story because they were so appreciative,” Boss said.

They started filming the documentary in mid-April 2018 and finished initial filming by the end of May. The process continued as they edited by adding more shots.

Reed said Weaver did a great job with filming the interviews. Weaver returned to the battlefield several times to get more shots of the birds. He even used a GoPro inside a box to get the video of recently hatched chicks stretching out to feed.

“He got some really imaginative videography,” Reed said. “He did a great job, and it had a really nice ending, too.”

There were some lessons to be learned for Boss and Reed as they put together the documentary.

“I like the filmmaking part,” Boss said. “The money part? To raise money is tedious and not fun. I wouldn’t want to do that for a living.”

That’s why, she said, she along with a couple of contributors were able to fund the film themselves.

The editing process was something Boss said she found to be laborious. “I thought that taught me that I could never be a filmmaker,” she said with a laugh.

Reed was a stage actor so he wasn’t ready for the additional movie-making processes of the film.

“I was kind of taken aback by the technical side of it, which is totally different from anything in my experience, so I just kind of sat back and watched that part of it.” 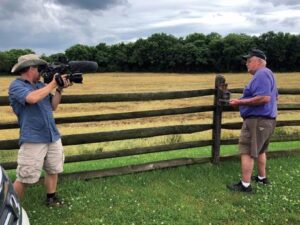 But Boss said through Weaver’s guidance, she enjoyed watching the storytelling unfold.

“It was just a lot of fun filming the bluebirds since I had never seen a bluebird until we moved here,” she said.

Reed said what he found to be interesting during the filmmaking was learning about the bluebirds themselves.

“I didn’t know they nest more than once,” he said. “A box can be used up to four times a season.”

There’s a saying when making a film, which is, “making a movie is hurry up and wait.” That also includes how long it takes to find an audience. Boss said she was disappointed when early on some festivals rejected it. But over the last year, the film found traction. It was shown on Maryland Public Television and was also included in this year’s Maryland International Film Festival-Hagerstown. Viewers can still watch it on Amazon Prime or Vimeo.

Listening to the song

Boss said she hopes people, like her, are inspired by the story and what the Raabes were able to do for the Eastern bluebirds.

“I hope they appreciate the beauty of the bird and the fact that it was saved by this group of 100 people, or at least started by that,” Boss said.  “And then maybe they’ll put up a box.”

Reed said “Bluebirds of Antietam” has inspired others to help the bluebird population.

“After this movie has come out, I’ve had people say to me, ‘Oh, I saw the movie, and I put up a bluebird box in my backyard, and then someone else would say, ‘yeah, I got seven of them.’ It’s getting other people interested in the work of Mark and Jean. So I think that’s pretty cool that (the film) has made an impact.”

To find out more about the “Bluebirds of Antietam” documentary, go to http://bluebirdsofantietam.com or visit the Facebook page.