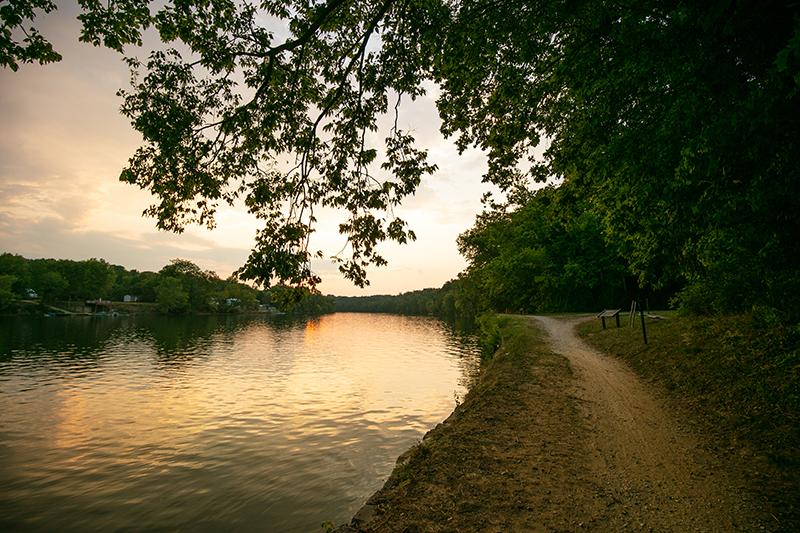 By Karen Gardner and Photos by Turner Photography Studio

As the C&O Canal National Historical Park celebrates its 50th anniversary, the park has something else to celebrate – a new headquarters in Williamsport.

“A lot of people say that the canal built Williamsport, and now the canal is going to save it,” said Dan Spedden, president of Visit Hagerstown and Washington County.

“There is a treasure trove of features there that allow the park to tell the history of the canal,” said former park superintendent Kevin Brandt, who retired in 2019. 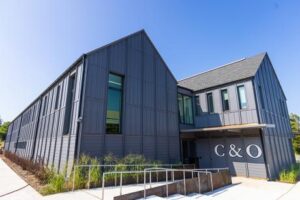 Williamsport, located along towpath mileposts 99 to 100 of the Chesapeake & Ohio Canal National Historical Park, is just over halfway along the 184.5-mile canal towpath, which extends from Georgetown in Washington, D.C., to Cumberland.

The C&O Canal and Washington County are inextricably tied, and this is particularly evident in Williamsport. There, you’ll see five major operations of the canal in a half-mile stretch. At the Cushwa Basin area is a visitor center, a lockhouse and lock, a re-watered section of the canal, the Cushwa turning basin, one of a handful where canal boats could turn around, and the Conococheague Aqueduct. 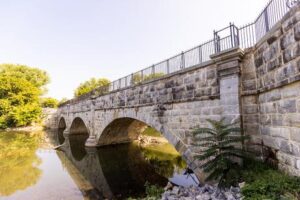 These features are either visible or a short walk from the park’s new headquarters on the former Miller Lumber Company property. The headquarters will open formally once offices reopen as the COVID pandemic recedes. When that happens, a workforce of 75 people will come to the former industrial town, where several plants have closed in recent decades.

“A lot of small towns might not have wanted a big new office,” Brandt said. Williamsport, however, welcomed the move and, starting around 2013, worked with the National Park Service to make it happen.

Park headquarters had once been at several different locations along the canal before being consoli- dated in rented office space on Dual Highway in Hagerstown. But park officials and volunteers thought the headquarters should be near the canal, and Williamsport was suggested. The Maryland Economic Development Corporation, which will lease the property to the park, spent $11.5 million to build the headquarters, and a grant helped pay for the Miller Lumber property. The NPS put in $5 million and agreed to a 30-year lease.

The C&O Canal is the eighth most visited national park, with 4.9 million visitors in 2020. Adjusting for day-use visitors, Spedden said about 1.2 million people traveled 50 or more miles to the canal in 2020. Those visitors buy food in local restaurants, and many stay in overnight lodgings. 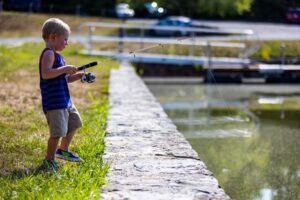 “If you can bring 10 percent of them into a B&B or café, that’s a pretty robust economy,” Spedden said. Hagerstown is also hosting the 2021 World Canals Conference Aug. 30-Sept. 2.

With 78 miles of the canal and towpath in Wash-ington County, the canal is a large part of the fabric of life here. Kathy Poole, who lives in Beaver Creek and served on the board of the C&O Canal Trust, recalled bicycling on the canal with her future hus-band early in their relationship. That was 30 years ago, and they still visit the canal regularly for bike rides, hikes and camping trips. 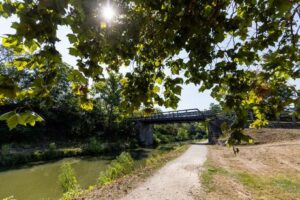 “It’s our greatest natural resource,” she said. “Every time you’re on the canal, you’re restored physically and emotionally. It’s been termed our ‘outdoor cathedral.’”

The towpath, typically 4 to 6 feet wide, has changed over the years. In the 19th century, the C&O Canal was built as a way to ship coal, lumber, and crops from the upper Potomac region to Washington, D.C., and beyond. In 1873, 539 boats were based in Washington County. The adjacent B&O Railroad, which started in 1828, gradually took over much of the canal business. By 1924, repeated flooding and competition from the railroad closed the C&O Canal for good. It took 46 years, but in 1971, the former canal and towpath became a national park. 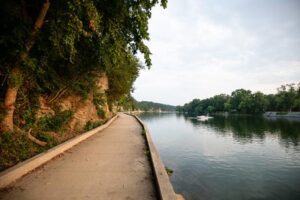 Flooding wiped out about three miles of the canal upstream from Dam 4 along Big Slackwater in 1972, 1985 and 1996. Until 2012, this section was rarely used. Instead, hikers and bikers had to navigate a treacherous 5-mile detour along local roads. Stimulus funding in 2009 provided the rest of the money needed to complete the $19 million project. In 2012, the park reopened the towpath from McMahon’s Mill to Dam 4.

That section is now a concrete path that protrudes from a rocky cliff and hugs the water. Reopening it coincided with the completion of the Great Allegheny Passage from Cumberland to Pittsburgh. In the past 10 years, the number of cyclists riding from Pittsburgh to Washington and vice versa has increased exponentially.

“That’s been a game-changer for people,” Brandt said. “You don’t need a lot of navigational skills. It’s also creating new stewards of the park. Creating awareness helps keep it in good condition.” 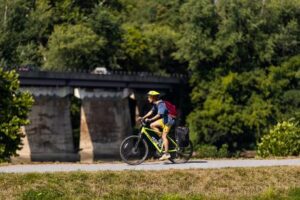 Riding conditions have improved even more since 2018, when the park began resurfacing the mostly dirt and gravel towpath surface with stone dust. So far, 56 miles of stone dust cover the tow-path from Swain’s Lock to Ferry Hill (milepost 73) near Sharpsburg. Eventually, most of the towpath will be resurfaced. When the project began, Brandt said a few users questioned the need to cover attractive grassy strips with crushed stone.

While those looked nice, he said, they happened by accident. “When the park service would do repair work on the towpath, they’d have someone sit on the back of a pickup truck spreading grass seed, and you’d end up with a two-track system,” he said. Ruts formed in the dirt paths between the grass strips. Those ruts got deeper and became hard on bikes and pedestrians.

Long-distance cycling traffic has steadily increased since Sinclair Hamilton and his wife started Riverrun Bed and Breakfast in Hancock in 2009. Hamilton renovated the building on Main Street once known as Taney House, which was built in 1878 as a whiskey warehouse. The cavernous building over-looks the canal and has 5 bedrooms available, all with private baths. 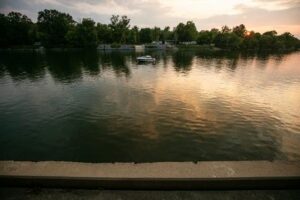 Hamilton moved to Hancock in 2003 and renovated a former bank into his current home. “I wanted a change of pace,” he said. Hamilton is a sculpture artist, and living near the C&O Canal appealed to him. “What can be nicer than having a 185-mile park in front of your house?” he asked. He started the B&B at the right time, as cyclists were increasingly riding the towpath on multi-day trips.

“Most of our clientele are bicyclists, and a small portion come by car,” he said. “Most of the cyclists are through-riders, riding from Pittsburgh to D.C. or vice versa.” Cyclists have helped local businesses thrive shortly after the last apple orchard closed. 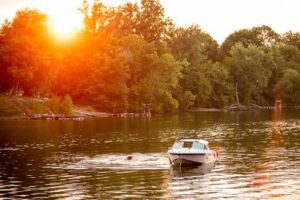 “These small towns have lost a lot of manufacturing and agricultural jobs,” he said. Hamilton is a founding member of Canal Towns Partnership, which encourages business activity in communities along the canal. Hancock had 233,000 visitors from the canal in 2019, Hamilton said. “We’ve put out brochures to help them find hotels, B&Bs, restaurants, and bike shops.”

Thanks to help from the partnership, Hancock has all of those amenities for visitors, and the town has rolled out the welcome mat. There are bike racks, water bottle replenishing stations, and informational maps. “These are things that help visitors, and I think we’ve been very successful,” he said. “One of the reasons is we work for the region as a whole, helping Shepherdstown, Harpers Ferry, Paw Paw, Brunswick. Anything that helps one canal town helps them all.” 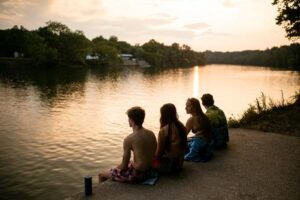 When not hosting cyclists, he and his wife like to step out their back door and take their bikes for rides along the canal. “We love going out for an hour or two,” he said. There’s a quarter-mile section of the canal that now has water, one of several sections of the canal that are able to demonstrate what the canal was like when mules pulled canal boats.

Today, the mules are for show. And the towpath, where the mules once trod, now transports tourists, runners, and pedestrians along a shady walkway to
the past.