A Surprise and a Miracle 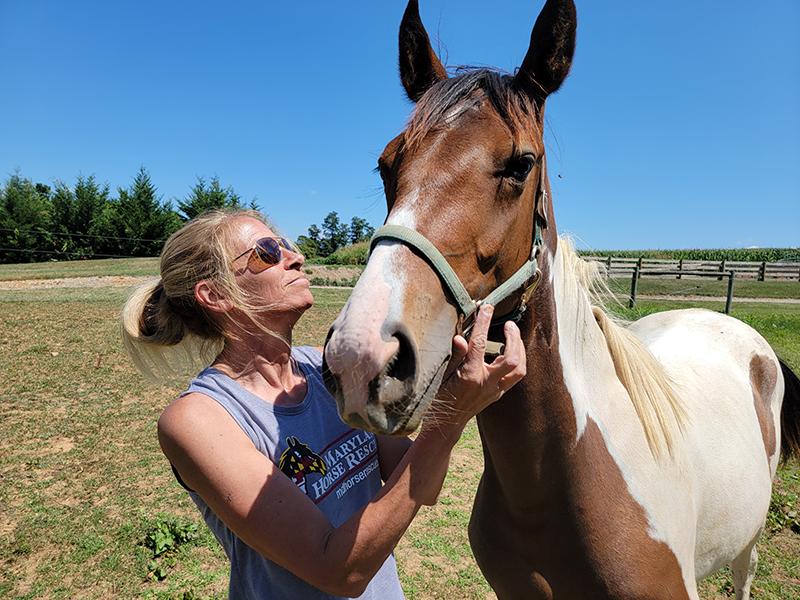 Was she, or wasn’t she? That was the question. Cassie came to the Maryland Horse Rescue along with some other horses from a farm in West Virginia in January of 2020. The horses had been exposed to a terrible neglect situation.

“They came in dirty and skinny,” says Melanie Bie-miller, executive director of the Maryland Horse Rescue. And one was possibly pregnant. After all, Cassie had been confined with two stallions. So, there was cer-tainly a possibility. “I said, ‘There’s no way that she’s not pregnant,’” says Biemiller.

So, the rescue had the vet come out. “The vet did a palpation, which was inconclusive and an internal ultrasound, which was still inconclusive,” says Biemiller. “We thought if she had been pregnant, she may have miscarried due to her lack of nutrition.”

Meanwhile she and her fellow horses, including the two stallions, Snip and Socks, adjusted to a better life at the rescue. And after having gone without sufficient food for so long, they eagerly indulged themselves. Cassie grew plumper and plumper. “We thought she must really be enjoying this grass,” says Biemiller with a grin. 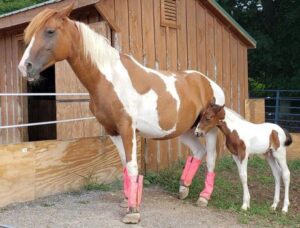 Until the day the farrier paid the rescue a visit. As he was working with Cassie he felt around her belly. “He looked over at us and said, ‘This horse is pregnant,’” recalls Biemiller. “’You need to get a blood test.’”

They did. And she was.

For the first time in the two decades since the Maryland Horse Rescue was established there was going to be a baby horse born under the rescue’s care. And while their motto is No Horse Left Behind, this was quite an unexpected development. The rescue specializes in taking in elderly and blind horses. Not pregnant mares.

“We were like, ‘Now what are we going to do?’” says Biemiller of finally confirming Cassie’s pregnancy.

The rescue considered a birthing farm where Cassie could go to have her baby. The mother and foal could remain there for a few months before returning to the rescue. “We weren’t really set up for this … not just for the birth, but for a young and active foal,” says Biemiller. The nonprofit rescue had also just moved from Mt. Airy to Westminster that same January that Cassie arrived. 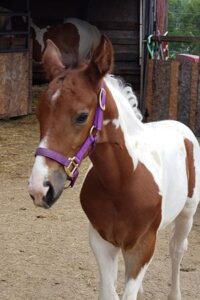 This includes teaching a young horse to wear a halter and to learn to walk on a lead rope. For a young foal, just learning to be comfortable around humans requires a lot of time and handling.

However, as the rescue was considering the best place for Cassie there was something special happening between the horse and Tina Davis, a volunteer and president of the rescue. “We just had this connection,” says Davis of Cassie.

Davis had grown quite fond of both the mare, and the baby she was carrying. Davis decided to take Cassie home with her. She and her husband, Eric, have several horses of their own at their farm in Smithsburg and they were well-equipped to add Cassie and her foal.

Davis reached out to some friends who had gone through the experience of having a horse give birth.

“Basically, it was everything after the fact once he got here,” she says. “Like alfalfa hay to help with her milk production and to keep her and the baby strong and healthy.”

And that was a concern, says Biemiller, the health of baby Cam once he arrived. The rescue wondered how he would be impacted by his mother’s poor nutrition in the early days of her pregnancy. Would he be born healthy? Would he thrive once delivered? 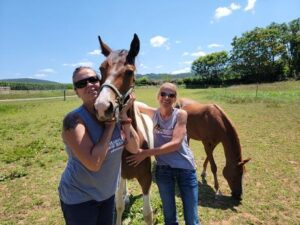 Tina and Eric had set up a camera in Cassie’s stall so that they could monitor her even while inside their home. Then came July 19. “We had been out and had just gotten home,” says Davis. “We were grabbing something to eat and I was changing my clothes. I popped up the camera and I was like, ‘Oh there’s a foot! We got to go!”

She alerted Eric and the two rushed to the barn. “It happened very fast,” says Davis.  So fast that she was unable to alert the rescue and those who wanted to be there for the birth. But she and Eric were there. “Eric was rubbing Cassie’s head the whole time,” says Tina.

Once Cam arrived, it was love at first sight. “He was the cutest thing I’ve ever seen,” she says, adding that she was delighted by his paint horse markings so much like his mother’s.

And he was healthy, weighing in at 100 pounds. “He was our big, healthy boy,” says Biemiller.

As he grew, Cam became an active little fella with a spunky personality. He enjoyed playing with his favorite pink ball and helping Davis out with chores. Well, sort of helping out. 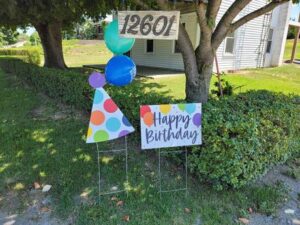 “Whenever I would take a bag of shavings to dump it in the pen he was right there,” says Davis grinning. “I would dump the bag out and lay the bag down and spread it out and he would stomp on it and one day he picked it up and took off with it.”

Spirited, yes, but also a good boy. “Melanie was saying, ‘He’s so well behaved,’ and I told her, ‘Well, he’s not known anything but love and support and attention,’ says Davis. “(He’s) so unlike the other horses who come to the rescue. They’ve gone through horrific things. You know his mama didn’t go through good things, but her son is having a very different experience.”

For a donation to the rescue, supporters were offered the opportunity to choose a name for the foal. The rescue’s former vet was selected from among those donating to the farm. She made her donation in honor of her aunt whose name was Claudia Ann Meyke. 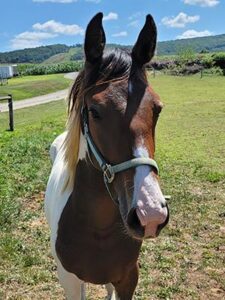 “We took the first letter of each of her names, and it spelled C-A-M, so Cam it was,” says Biemiller.

Recently, the rescue celebrated Cam’s first birthday with a party, complete with a cake, balloons, and a party hat for Cam. But it was more than just a celebration of his turning one year old. For those at the rescue it was about something much more.

“Cam was a shining star during COVID when people were frustrated and scared and depressed,” says Biemiller. “During all of that our whole volunteer base came together to celebrate a little baby horse.”

A surprise and a miracle all rolled into one.