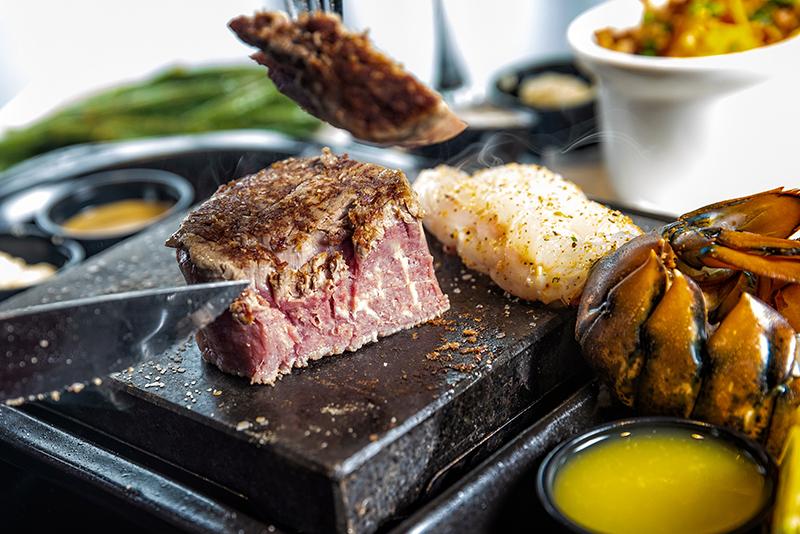 Steak is a celebration meal, whether it’s eaten gathered around a smoldering backyard grill or savored in the lap of luxury. While we give thanks for our daily bread, a juicy steak makes mealtime something special. That’s the vibe at Black Rock Bar & Grill at Valley Mall. 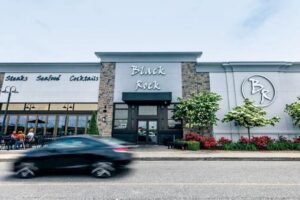 It’s a locally-owned franchise of a small-but-growing chain headquartered in Novi, Michigan. Founded in 2010, Black Rock mashes upscale fare with casual comfort and a unique premise…cook your own. Kind of. While some folks might envision slaving over a hot fire pit, rest assured, it’s not that kind of place. Rather, guests sit comfortably at regular tables in a cool, sleek dining room. The distinctive twist is that Black Rock’s certified Angus beef starts cooking in the kitchen moments before being whisked to the table on scalding tiles of black, volcanic rock. Born of magma from deep within the Earth, the rock slabs are heated to a toasty 755° and nestled into insulating ceramic trays, creating a mini personal cooking station for each guest.

Fans of the place liken it to a posh fondue restaurant, hibachi, or hotpot joint, because of its interactive element and social atmosphere. Owner Jennifer Beaudoin says that’s what attracted her, too. “I really like that it isn’t just a restaurant, it’s an experience.” While researching the opportunity, she noticed that guests were actually talking to each other. “The only people on their phones were the ones taking pictures of the food.” 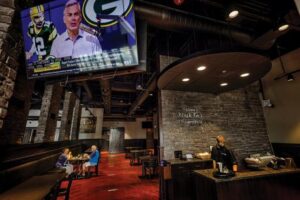 No stranger to this industry, Jennifer grew up above her parents’ seafood restaurant in Winchester, Virginia, eventually joining the family business as a partner in their Buffalo Wild Wings franchises. The emerging Black Rock Bar & Grill company came recommended by a business associate, prompt- ing her, along with a new set of business partners, to open the Hagerstown location on September 16th, 2019. Now they are working their way into the fabric of the community. “It’s a way for people to actually engage with each other, to enjoy and build relationships over a meal.” It doesn’t hurt that the food is always cooked fresh, exactly as the customer likes it.

During our visit, server Vanessa Friesen walks us through the highlights. “All of our steaks, except the NY strip, are baseball cut (rounded and about 2” thick, roughly the size of a baseball),” says Vanessa, as we peruse the extensive menu that includes house-made soups, sandwiches, ribs, and chicken dishes, even vegetarian items like Impossible burgers. She points to the page titled Steak University. “It all depends on what you like. The ribeye is a little fattier, with more marbling. Sirloin is the midpoint and tenderloin (a.k.a. fillet mignon) is the leanest cut.” Steak prices range from about $17-$34, with two sides included. 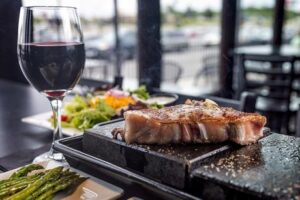 General Manager Erin Sirbaugh has worked with Jennifer in other capacities for 19 years. She chimes in, “Our vendor knows to bring us the best. Today’s steaks were probably cut yesterday.”

The Mother of All Sandwiches, “M.O.A.S.,” is tempting. It is steak, mushrooms and onions smothered in nacho cheese that’s stuffed into a tortilla and fried. So is the premium One-Eyed Lucy burger. That’s topped with a fried egg and bacon, but we opt for stone- grilled steaks and sides with a round of hefty appetizers to share.

Stuffed mushrooms lead the parade. No mere buttons, the dish is two palm-sized portabellas packed with a full crab cake each. There’s a burst of spice and a blanket of parmesan that overflows onto the cast iron skillet, creating a lacy ring of crispy cheese. The fried calamari is tender, surprisingly light, and drizzled with sweet chili sauce. The jumbo wedge salad ordered by a companion, along with its generous portion of blue cheese crumbles and cherry tomatoes, is more than enough to share, too.

The Bubbling Shrimp™ on a Stone lives up to its name. Six to seven large shrimp tails swim in a rich, roiling brown sauce with notes of Cajun spices and tangy Worcestershire. It is served in cast iron, on a stone, in a tray, with toasted garlic bread for dipping. And it’s still piping hot 20 minutes later. Temporarily sated, our heads swivel as the next table digs into their own bubbling shrimp and a neat stack of thick, golden-fried asparagus.

Main dishes arrive on wheeled carts, wafting plumes of savory smoke, reminiscent of a cozy campfire, but the haze is momentary. The soaring ceiling houses a high-powered exhaust system that clears the air fairly quickly. Vanessa gives cooking tips as she slides loaded platters down the table to each guest, to minimize handling. 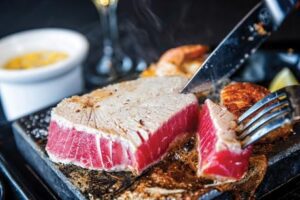 “You have options.” She explains that flames dry out meat as it cooks, especially to well done, while stone grilling preserves juiciness. “A lot of people will cook one bite at a time.”

Diners have dominion over the complete process. Depending on how you slice it, “rare” might take a swipe or two across the salt-strewn stone and “medium” is about 20 seconds on each side. Individuals choose whether or not to add garlicky Casino butter during cooking or use the stone dry, but it’s hard to resist a dip in the signature Rock Sauce. It’s a creamy soy-consommé blend that excites the tongue’s umami receptors. It’s made in-house and sold to-go by the pint. 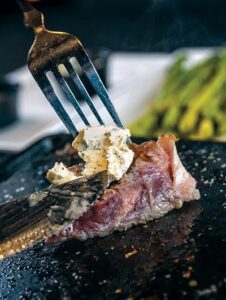 “Don’t forget,” reminds Vanessa as she hands over a baked potato, then a crock of creamed corn with bacon, “you can put other foods on the stone if you want to reheat them.” So, we play with caramelizing delicate sea scallops, forkfuls of salmon, and tender barbequed pork ribs from our combos.

“That’s one of the benefits,” adds Erin later. “This stone will stay searing hot throughout the meal while you talk and enjoy, so your last bite is just as warm and inviting as the first.”

Opening just months before the pandemic lockdown, Black Rock Bar & Grill is finding its niche as folks rediscover in-person dining. Wait times on Friday and Saturday evenings can stretch up to 2.5 hours, so patrons are encouraged to call ahead for Priority Seating (minimum 2 hours’ notice) or spend some time in the mall. There’s also a patio and full bar with its own menu of craft cocktails, beer, and wines. The Smoked Old Fashioned elevates this preparation by infusing an inverted glass with cedar smoke prior to mixing. The effect is a mellow, unmistakably “real” depth of flavor. Black Rock’s Magic Potion Martini delights the eye as well as the palate. It incorporates a specialty tea, which changes color from pale yellow to bright purple as it is mixed at the table. 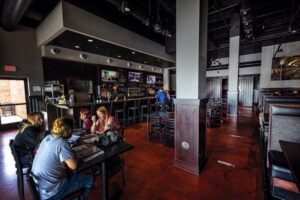 Then there’s dessert. Guests might have to plan for leftovers if they want a sweet treat, since portions are substantial all around. The most popular dessert is the show-stopping Sizzling Black Rock Volcano. It starts with a fudgy house-baked brownie topped with four scoops of ice cream and an inverted waffle cone filled with marshmallows. Then it’s laden with whipped cream, caramel, and chocolate sauce and decked with a fiery sparkler to make it look like a volcano in all its glory. Comparatively unassuming but equally enticing, Grandma’s Old Fashioned Apple Crisp layers Granny Smith apples into a warm skillet with crumbled oat topping, vanilla ice cream, and oozy caramel.

Vanessa’s husband, Ben Friesen, is the Kitchen Manager/Head Chef. He loves to scope out the dining room as people enjoy their meals. “It’s really heart-warming sometimes,” he says. “You might see a father and young son and find out it’s their first time cooking together.” Ben, himself, started working in professional kitchens at 14, with his dad’s permission. He offers some parting advice for our next visit, “Bring an appetite and bring your friends.”