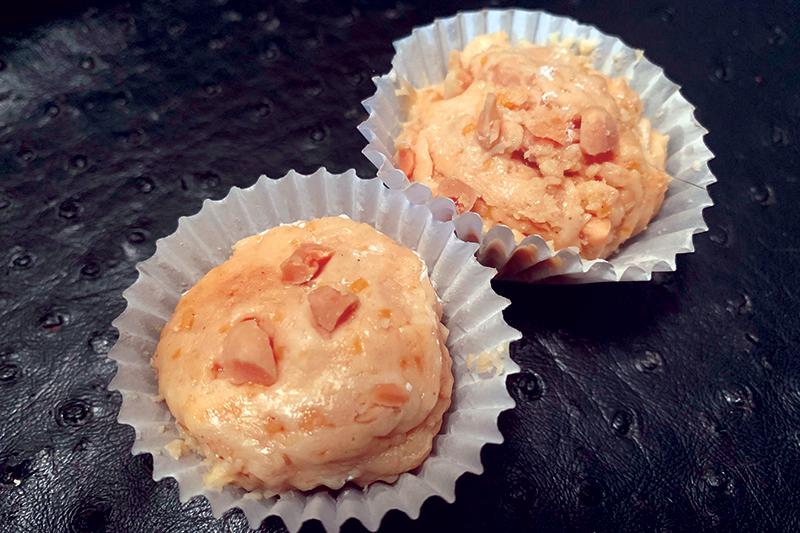 A classic school lunch dessert still bring up memories for some.

Story and photo by Crystal Schelle

Served with the flip of an ice cream scoop into a white ruffled baking cup, Pea-Che Fudge was the coveted dessert for many Washington County Public School students in the 1980s. The Food and Nutrition Services original treat was light tan — nearly orange in color — with bits of nuts throughout the dish but had the smooth consistency of homemade fudge.

Although the dessert’s name sounds like “peachy,” the fudge was a combination of two foods that probably weren’t thought ever to have been combined: peanut butter and cheese, hence “pea” for peanut butter and “che” for cheese. However, for many years the secret ingredients were closely guarded by the county’s lunch ladies.

“If kids knew what was in it, they probably wouldn’t have ate it,” Annabelle Kayser said with a laugh.

Kayser, who turned 92 last month, said she’s not exactly sure where the recipe came from, although she believed they received it one year during their Food and Nutrition Services annual conventions in Ocean City, Maryland. There they would learn tricks of their trade as well as discover new recipes.

Finding ways to use surplus food was vital for Food and Nutrition Services across the state that needed to find a way to serve the USDA commodities they didn’t sell, Kayser explained. Those who had lived through leaner times were not ones to waste anything. The Reagan Administration’s school lunch spending budget forced their hands to waste not. In 1981, the federal school lunch spending was cut by $1.5 billion, mandating smaller meal portions while providing a strict inventory for the same number of kids who needed to be served.

One approach had school systems distribute recipes to try to make something kids might like to eat while also cleaning out their pantries. Pea-che Fudge was just one of many creations, including the popular sweet potato muffins.

In times before peanut allergies were commonplace, USDA supplied schools with peanut butter. “We also had a surplus of the cheese,” she said.

Even for Kayser, the finished product surprised her. “I remember from what we put into it, it turned out to be something good,” she said.

Kayser’s daughter-in-law Linda Yeakle of Pecktonville was a food service worker as well. She split time between Clear Spring High and Middle schools, then later at Clear Spring Elementary School. She worked for 33 years for the schools until retiring in 2014, after working at Rockland Woods Elementary School in Hagerstown. She, too, remembers placing the gifts of Pea-che Fudge on students’ trays during the heydays of the dessert in the 1980s.

“I can remember them making it,” Yeakle recalled, saying they’d use a small ice cream scoop to place them in the cups. “I remember they would grind the peanut butter and the cheese up and chop the nuts for the fudge.”

The end result was delicious, she said. “Well, it didn’t taste like cheese. I think it tasted more like peanut butter and it was so creamy.”

Schools in the county that had the proper kitchen equipment would make Pea-che Fudge in house. Luckily, the dessert wasn’t a weekly menu item; it was only rolled out for special occasions. Yeakle said even when it wasn’t on the menu, they would often make extra desserts to sell a la cart to students.

Kayser said she has many memories scooping out thousands of balls for the students, who would often make sure to buy an extra one of their lunches.

The now 49-year-old would plunk down extra change just to get another piece.

“I just used to love the taste, and I would always buy extra,” she said. “It had a smooth, rich taste and to this day I can’t find nothing that tastes like it.”

Hagerstown Facebook groups will go pitter-patter with the nostalgia of just the mention of Pea-che Fudge, remembering the experience and aura of the local treat. Phyllis Bennett of Berkeley Springs, West Virginia, is one of those fans. Bennett, now 50,  attended Fountaindale Elementary as well as Northern Middle and North Hagerstown High schools.

“I loved them for the peanuts and mysterious ingredients,” she said in an interview.

Bennett found a version of the recipe online and recently made a batch of Pea-che fudge.

“They were delicious,” she said, noting they tasted exactly as she remembered them.

Yeakle said over the years with the school system’s menus certain items were cut, and that often included desserts.

“They started making the menus more nutritional, so things like (Pea-che Fudge) were taken off,” she said.

It’s because of that, Pea-che Fudge’s fate became only a nostalgic memory for those Washington County students who were lucky enough to savor the sugary treat.

Kayser is tickled that students will still ask her about Pea-che fudge nearly 30 years after she scooped it into those white cups. “They still tell me what wonderful meals we had,” she said.

And if any former students want to recreate their favorite school dessert, Kayser has only one wish when they take a bite: “I hope they remember all of us.”