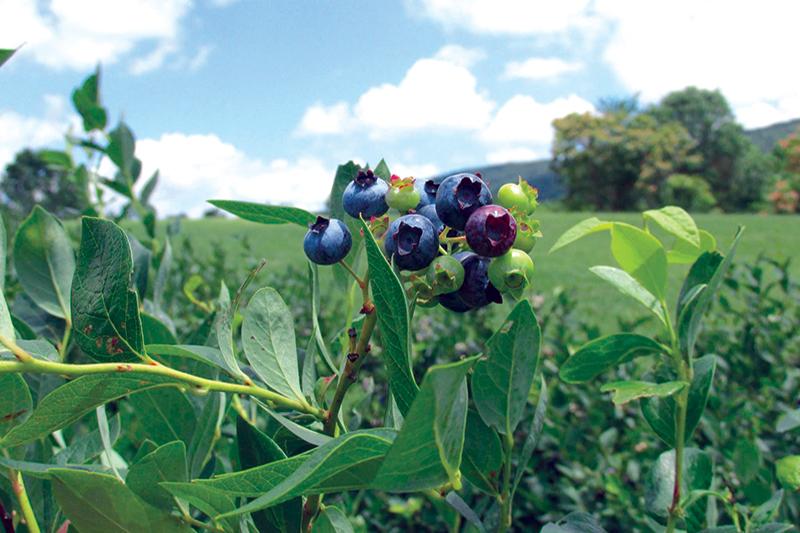 Frog Eye Farm is the place to go to pick-your-own delicious blueberries.

Deep in the heart of Pleasant Valley is a blueberry farm, where you can pick blueberries surrounded by a slice of rural paradise. Sandwiched between Elk Ridge and South Mountain, Frog Eye Farm offers pick-your-own (PYO) blue-berries throughout blueberry growing season.

From mid-June to the end of July, ripe blueberries are clustered on 2,200 highbush blueberry plants that fill nearly 10 acres at Frog Eye Farm. Owners Dan and Jennifer Mills welcome blueberry pickers most days during blueberry season, usually from 8 a.m. to 2 p.m. 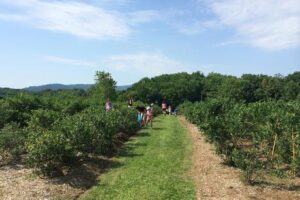 Frog Eye Farm is about 15 miles south of Boonsboro, just off Md. 67 on Frog Eye Road in Knoxville. This narrow road takes visitors across Israel Creek and into another world. The road turns from paved to gravel, and the meandering ride leads through leafy woods and lush lawns to a sign wel-coming you to the blueberry farm.

The farm itself stretches across 39 acres. Forested slopes drop to Israel Creek, which fills the pond that sits below the blueberry patch. Downhill from the blueberries is a working barn full of equipment to maintain the blueberry bushes. Beyond the barn is a leafy canopy of trees that surrounds the house where Dan and Jennifer live with their two children.

On a summer day, birds chirp and a tranquil pond beckons. The expansive sky frames the nearby ridges and sloping fields. Nature is all around. 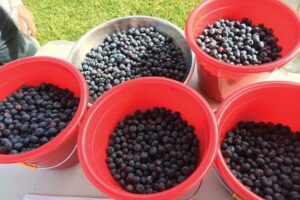 Summer 2021 is the 12th season that the Mills have operated Frog Eye Farm, but they didn’t set out to become blueberry farmers. Hank Dubin, a Washington, D.C., engineer and entrepreneur, started the blueberry farm in the early 2000s, planting most of the existing blueberry bushes, fencing in the 10 acres, building the barn, and up-dating the old farmhouse. But as Dubin got older and more frail, he wanted the blueberry business to continue, so he put the farm up for sale. Dan decided to take a look at the farm.

“My wife had been here with the kids, but I’d never been to a PYO, other than for pumpkins,” he said. He was taken by the farm and the placid, rural surroundings. “I thought, ‘This is incredible,’” he recalled. “I also thought, ‘You’re not used to this. This is out of our league.’” Still, Dan and Jennifer decided to make an offer 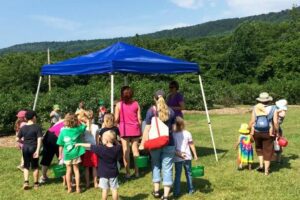 Dubin had several offers, and the Hills expected theirs would get lost. After all, they had recently moved to a home in the Spring Ridge development in Frederick, and they had no experience with farming or owning a large property.

“Hank saw something in us,” Dan said. “He thought we would take care of the property in the fashion that he wanted.”

In 2011, the Mills bought the business, and Hank spent that summer teaching the couple how to take care of blueberry bushes and manage a PYO farm. Jennifer is a guidance counselor at Charles Town Middle School, while Dan is in medical equipment sales and works from home. They decided to give the business a try while keeping their day jobs. Things seemed to go well, and they moved out to the farm the next year.

Ten years later, they’re still at it, and they’re still working their day jobs. Conveniently, Jennifer has summers off. And their kids grew up hiking through the nearby forests, fishing in the pond and the creek, and helping maintain the blueberry business.

Dubin eased the path into the blueberry PYO business for the Mills. “He got everything started, and he used a lot of trial and error.” He planted most of the bushes, chose the 24 varieties that are used, set up an irrigation system, fenced in the bushes using a wire fence, and bought the farm equipment needed to maintain the bushes and the property. 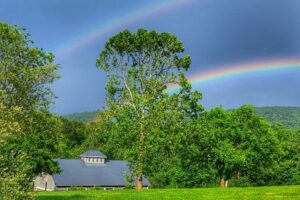 Still, Dan knew he was in for it when he saw a pair of thick, worn leather work gloves dotted with holes. He wondered whether he was capable of doing the work required to wear out a pair of heavy leather gloves. “I’ve since gone through many of those types of gloves,” he said.

The 2,200 blueberry bushes, each bearing thousands of berries per season, need constant maintenance. The Hills raise them using integrated pest management techniques. Although the farm isn’t certified organic, pesticides aren’t used. “We do not spray,” Dan said. The fencing mostly prevents deer from eating the bushes.

“The biggest thing is the birds,” he said. Birds are known to enjoy blueberries, often at the expense of the home gardener. “We just figure Mother Nature gets her fair share,” Dan said. The 41 rows of bushes are spaced wide enough for a riding mower. Weed whacking and hand pulling gets rid of the growth around each bush, tasks which take up much of Dan’s free time during warm weather. 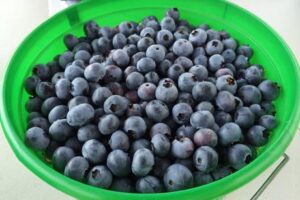 “We do mulch,” he said. “That’s a laborious task and one of our more expensive ones.” Each fall, an 18-wheel truck brings the mulch to the farm and pumps it into the blueberry patch, where the Hills and several helpers are waiting. It must be spread thinly around each bush, while taking care not to let the mulch get to close to the stems and rot them.

Spring is pruning season. The bushes need to be pruned so that branches don’t overlap and so that each bush has plenty of airflow through the center. New canes are encouraged while older canes are pruned. “That’s how the plant continues to produce,” Dan said. With the right care, blue-berry bushes can live 30 years or more. So far, he’s only had to replace around 200 bushes in the patch.

Dan and Jennifer have a lot of help keeping their blueberry patch going. Son Charlie, 16, does a lot of the farm tasks. Craig Blum and Fred Jones are some of the farm’s reliable helpers, as are Dan’s and Jennifer’s parents. The farm often hires young people to weigh the blueberries, run the cash register, and do some of the farm labor. Neighbors often stop by to lend a hand, and they almost always look the other way when traffic on the gravel lane increases during busy periods. 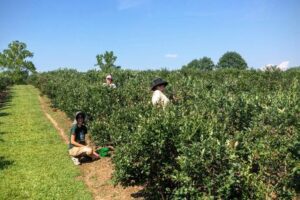 The pandemic brought a record number of berry pickers last season, and there were days when the Hills closed the farm to allow new berries to mature. Each bush provides berries for about two to two and a half weeks.

This year, Dan expects the bushes to produce through the end of July, and in some years, blueberries ripen into early August. Although the Mills sold berries at farmer’s markets in their early years at the farm, in the last few years, they’ve focused on the PYO experience that blueberry pickers enjoy.

“We’re caretakers of a place that brings joy and happiness,” Dan said. Their reward? Living in a rural paradise and the muffins, pies, and even wine brought as gifts from happy customers, all made with Frog Eye Farm blueberries.