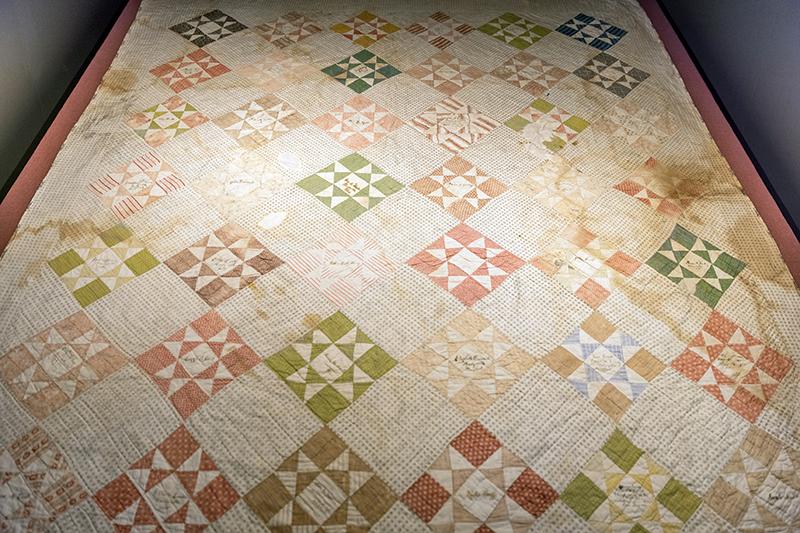 A farewell gift given to a beloved family in 1873 miraculously finds its way back home.

It took a village to make the Pry quilt of Keedysville, Maryland before it left in 1873. It has taken a village to bring it back.

Back to the town where it was made, pieced together lovingly as a farewell gift for a popular family. Back to the town where it will be displayed, as a relic of a war that left the area shattered. The quilt was given to the Pry family when the family uprooted and moved to Tennessee. Since then, it has had a circuitous journey back to its new permanent home in Keedysville.

Now on display in Town Hall, a former bank, the quilt rests in the building’s old safe. Grant funding to display the quilt helped to turn the safe into a climate-controlled environment, complete with a plexiglass doorway cover and a suspended backing board, which displays the delicate textile at an angle for viewers to see. 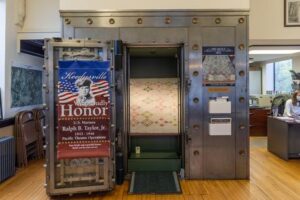 The Keedysville Historical Society used nearly $14,000 in grants, along with matching contributions from the town’s hotel-motel tax fund, to conserve the quilt and pay for the display costs.

“There was a lot of hand-sewing,” Stern says. “I vacuumed it to get rid of the dirt.” But Stern didn’t use an ordinary vacuum cleaner. She used a variable suction vacuum with specialized vacuum heads to remove surface dirt. She filled in the quilt’s numerous holes with clean muslin, attaching the new cloth in much the same way the original cloth pieces were hand-sewn together.

Keedysville citizens made the Pry quilt in 1872 as a farewell gift to the Pry family. The Prys lived in a farmhouse on a hilltop overlooking the community but left in 1873, more than a decade after the Battle of Antietam severely damaged their home and farm, for a new life in Tennessee. Stitched into the queen-sized quilt are squares bearing words of farewell and friendship. 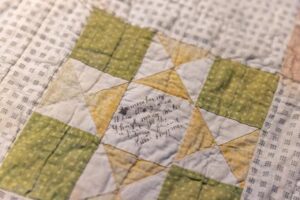 Fast forward to 1999, and the dilapidated quilt is in a yard sale. For many years, the quilt was a treasured family heirloom, but a distant family cousin in New Jersey came to possess it, and she decided the quilt had to go.

Quilt lover Maggy Sluyter bought the quilt and tried to determine its origins. She mistook the words Keedysville, Maryland, for Kennedyville, a town in Kent County, and gave it to the Historical Society of Kent County. There, staff realized they had a piece of Keedysville history. Staff members tracked down Doug Bast, local historian and founder of the Boonsborough Museum of History, who retrieved the quilt and handed it over to the Keedysville Historical Society (KHS).

But the story of the heirloom doesn’t end here. The KHS took ownership of the quilt, but the quilt’s poor condition made members wary of handling it. It stayed hidden from view, stored in a rectangular box in members’ homes. 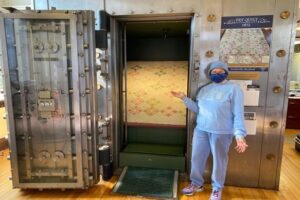 In 2012, the Washington County Museum of Fine Arts displayed the quilt in a year-long exhibit on the Battle of Antietam’s effect on nearby residents. The Pry House, the homestead of Philip and Elizabeth Pry and their five children, served as Union headquarters on Sept. 17, 1862, the day of the battle. The once thriving farm served as Union headquarters for only a few days, but it became a hospital for injured officers for months. The Union Army burned fences, trampled fields, and took the family’s food, horses, and livestock. The Prys never recovered from the financial losses the battle caused.

By 1872, the Prys decided to leave the area. Fellow members of the German Reformed Church, now called the Mount Vernon United Church of Christ, made the quilt as a farewell gift to their cherished friends. The quilt’s Ohio Star pattern was often used for quilts of farewell in the 19th century.

Each of the 42 blocks consists of quarter-square triangles around a central square. The blocks are pieced together with sashing strips and cornerstone blocks. In the center of each block is a muslin square bearing the names of Keedysville residents who signed the quilt.

John G. Kretzer’s name is above his inscription, “Think of me/when this you see/away down in/old Tennessee/1873.” Others, like Cora A. Cost, Annie K. Neikirk, and Rubie Gouff simply signed their names. One deteriorated square reads “Carter.”

Stern re-attached loose fabric to the quilt. A large tan stain, which could be coffee, tea, or even mud, covers a couple of the squares. In one square, the fabric dye had disintegrated, a common problem with antique quilts, Stern says. 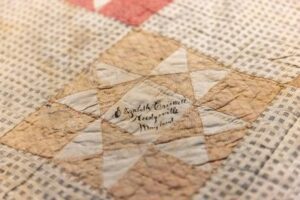 “Making friendship quilts was very common in that era,” Stern says. The quilt measures 81 inches by 72 inches, large enough for a queen-sized bed.

“It’s a real treasure for Keedysville,” says Sue Gemeny, KHS president, who spearheaded the conservation effort. “To realize it came home after it almost ended up in the burn pile.”

After the quilt’s 2012 display, the Pry House Field Hospital Museum briefly exhibited it. The museum, owned by Antietam National Battlefield and sponsored by Frederick’s National Museum of Civil War Medicine, lacked the resources to display the quilt in a way that would prevent deterioration.

Karen Whitehair, then a staff member of the museum, suggested KHS preserve the quilt. Sue Gemeny, KHS president, decided to take on the project, and she sought funding sources. In fall 2019, KHS applied for a grant from Heart of the Civil War Heritage Area (HCWHA), an organization that supports Civil War heritage tourism in Washington, Frederick, and Carroll counties.

The organization provided $3,778 to the historical society. With matching funds from the town of Keedysville, the KHS hired Stern to preserve, or more accurately, conserve, the quilt. KHS also hired Laura Oates to design publicity materials and an interactive quilt display. 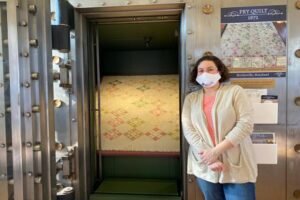 More money was needed to build the display, however. Volunteers secured a $5,000 grant from the Nora Roberts Foundation and another $4,000 from the HCWHA to cover the display costs. The Town of Keedysville matched the grants. This allowed KHS to hire Explus, of Sterling, Virginia, to prepare the display area.

The quilt will continue to tell the story of the Battle of Antietam’s effect on local citizens. It “aligns with the mission of the Heart of the Civil War Heritage Area to promote the stewardship of our historic, cultural, and natural Civil War resources,” says Emily Huebner, assistant director of the HCWHA.