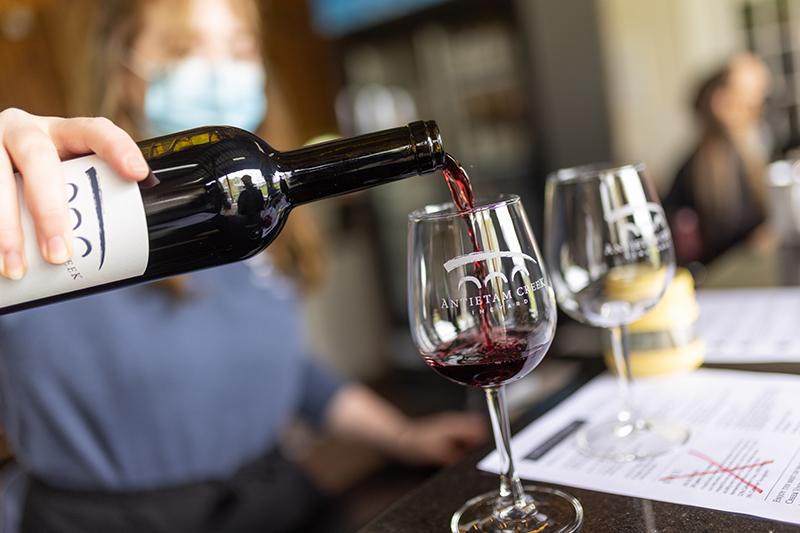 Delicious Wines from Plant to Bottle

One of the first steps to making wine at Antietam Creek Vineyards involved a deer fence.

That was back in 2011, after George Warmenhoven and Joan Larrea spent months testing the soil, monitoring the weather, and moving hundreds of giant rocks that seem to sprout in this part of Washington County. Antietam Creek Vineyards is nestled on the edge of Antietam National Battlefield on the outskirts of Sharpsburg, Maryland.

The couple decided to plant their first vineyard on a 4.5-acre section of ground that slopes gently, catching the breezes and the sun’s rays. But grapevines stand little chance of surviving around hungry deer, so the couple built a 9-foot-tall woven wire deer fence. For the past decade, the fence has done its job, and no deer have made it into the vineyard.

Each August and September, grapes collected from the vines fill six tanks, four with red wine and two with white wine, before being directed into barrels for aging. Several times a year, the couple, along with friends, family, wine club members, and others bottle the wines with the help of a mobile bottling truck. 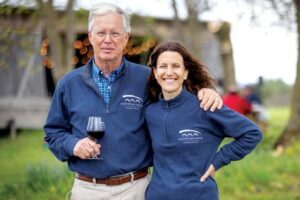 This operation happens in the basement of the farm’s renovated 1903 bank barn. For red wine, harvested whole grapes are transferred into squeaky-clean tanks, where yeast helps turn sugar into alcohol and the mixture releases carbon dioxide. The wine is then separated from the grape skins and pumped into French oak barrels to age.

“I’d been desiring to start a vineyard since the mid ’80s,” says George. “It’s so capital intensive, and that wasn’t the right moment.”

George, with a degree in biology, watched Virginia’s winemaking reputation take off. In the 1980s, Virginia’s wine industry was young, but the state is now an international player in wine producing.

Joan’s family has owned Belinda Springs Farm along Antietam Creek since 1965, and Joan spent part of her youth on the farm. For decades, the neighboring Shade farm was a working dairy farm, but by the 1980s, the cows were gone and much of the farmland was leased to other farmers. 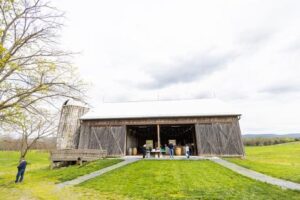 In 2008, the time seemed right to start their winery, and the Washington D.C-based couple found the perfect property in the Shade farm. There, they began turning their winemaking dreams into reality.

Joan has kept her day job in development finance, but George left his career in healthcare and IT to make Antietam Creek Vineyard a success, tapping into knowledge from his biological training and his years of studying viticulture, along with years of talking to other vineyard owners. Joan helps on weekends in the tasting room and vineyard. The dream became more real when they hired Jason Burrus of Burrus Wine Consulting as winemaker.

They planted their first acre of vines in 2011, and in 2015, they sold their first bottles of wine. They planted varieties suited to Maryland’s climate, with its cold winters and hot, humid summers. Despite occasional weather mishaps like drought, excess rain, or late frosts, the microclimate at Antietam Creek Vineyard has helped the vineyard thrive.

Breezes blow frequently, and the farm’s location in a rain shadow, a meteorological term for an area that gets less rain because of its geographical features, usually provides the grapes with just enough water but not too much.

The rocks that are so plentiful on the Shade farmland were a challenge to move, but they also make the soil ideal for growing wine grapes. The limestone-enriched soil has a pH of 7, meaning it has a neutral acidity. Limestone and other ideal nutrients in the soil also give the grapes the right terroir, or flavor, that makes the wines distinct. Those flavors vary not only from soil type, but year to year from weather.

Antietam Creek Vineyards is a farm to bottle operation, which means all the wine produced comes from grapes that are grown, processed, and bottled on the farm. Most of the 750 to 800 cases of wine produced annually are also sold on the farm. 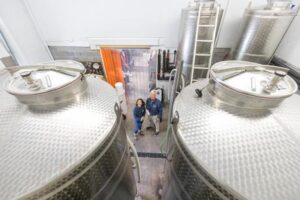 The work to produce wine is year-round and labor intensive. Grapevines must be pruned vigorously in the spring and monitored for frost damage. “It’s like giving them a crew cut,” Joan says. They must then be monitored throughout the growing season. “It’s a constant struggle to untangle the grapevines. They just want to grow all over the place.”

Grapes are affected by sun, by wind, and even by the shade of the leaf growing above them. Even when the weather cooperates, fungus and other diseases can occur. “We try to be as chemical-free as possible,” Joan said. But pesticide applications are part of the process.

They learned the intricacies of wine producing by talking to other winemakers and growers. “Everyone is very supportive of new people coming into the industry,” he says. “Our style is more like what they do in France.” Many French wineries are family-run, small boutique operations, and that’s the type of business George and Joan envisioned for their winery.

In that first year in 2011, they planted a test acre of merlot, cabernet franc and petit Verdot grapevines. They also put in a row each of cabernet sauvignon and malbec. The next year, they planted albarino, chardonnay, sauvignon blanc and half a row of pinot noir grape varieties. Pinot noir was a surprise success.

“It’s the heartbreak grape,” George says. “It ripens quickly and wants cooler night temperatures.” But it did well and the couple has kept it in production. 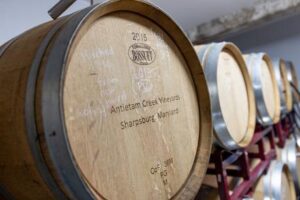 The 4.5-acre vineyard now has 55 rows of grapes. Each row is 620 feet long. The vines are anchored by wires that extend the length of each row. Grapes are harvested in August and September and loaded into bright yellow picking lugs. The lugs are then stacked on pallets and carted to the basement of the barn, where they are de-stemmed and crushed into juice. Eventually, that juice ferments into wine.

“We make a very good malbec,” George says. “We were told to produce what you like.” Although the vineyard does offer some semi-sweet varieties, most of the wines are dry.

A peach orchard that dates from Shade farm days is next to the vineyard, and it presented a problem. The 100 trees usually produce peaches, but overnight spring cold snaps occasionally kill the buds and that year’s peach crop. The couple considered plowing the trees under, but decided to take a chance. The large peaches, about 1 pound apiece, ripen in a brief two-week period. Instead of selling them at a farmstand or on site, the couple decided to make peach wine.

Most wines made from fruits other than grape contain fruit flavorings, but Antietam Creek Vineyards’ peach wine is 100 percent peaches. “It’s like a peach in a bottle,” Joan says. “It’s insanely popular.” The peach wine is available for only a few weeks each year before the winery runs out. 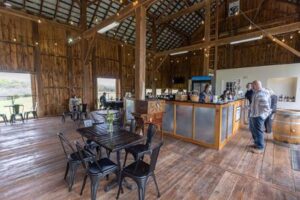 The primary focus, however, is red and white wines. George grew up in Europe and was familiar with French Burgundy and Bordeaux varieties along with Australian wines. Petit Verdot, cabernet franc, merlot, chardonnay, sauvignon blanc, and vidal blanc offered that taste of the old country, grown on limestone soil in a microclimate that suited the grapes.

As the business grew, the couple upgraded from the tent that served as the initial testing and tasting area. The farm’s century-old bank barn seemed suited for the job. After two years of extensive renovations, the barn opened in 2018. On the main floor of the cavernous structure is a tasting room and storage area. The barn’s striking hand-hewn chestnut beams and original floors imbue the tasting room with rustic charm.

Below the tasting room is the production area, including the tanks, barrels, and a lab area for testing. It’s in this cool basement that the wines age any-where from a few months to several years before being bottled. 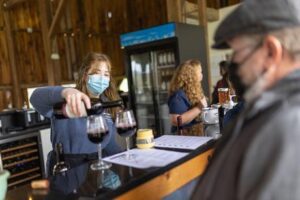 With total sales of 750 to 800 cases of wine each year, Antietam Creek Vineyards is a boutique winery. “We don’t have the volume to distribute,” George says. Most of the wine is sold on site. Sales began to increase in 2018 when the barn/tasting room opened.

The operation has grown as well, and the barn now employs staff to help with wine tastings, plan events, and maintain the grapevines.

Visitors can gaze out over the vineyard’s expansive view. Soft, rolling hills with clumps of trees stretch toward Antietam Creek on one side. Antietam National Battlefield is a neighbor. The couple is quick to point out that their wine labels evoke the landmark Burnside Bridge, not the battle itself, in deference to the memory of those who fought there.

Live music plays on weekends spring through fall, mostly Americana, bluegrass, and soft pop. Visitors sit at picnic tables. Food trucks sell food or you can bring your own. Well-behaved dogs on leashes can drink from various water bowls. Kids can play on the rocks and run through the fields. 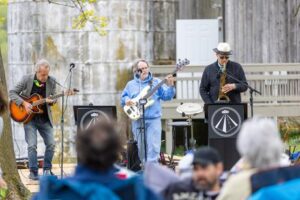 “Every year looks really different,” Joan says. COVID-19 put a temporary end to indoor seating in the tasting room, but visitors still came, looking for outdoor entertainment. “People were looking for a safe space,” she says. Tables are spread out, giving customers plenty of room to social distance. This year, they expect to open on select Friday evenings.

“It’s not a bar,” Joan says. “It’s a place to have a glass of wine before your Friday evening.”

The Antietam Battlefield scenic easement means that park officials can approve any changes to the farm’s outward appearance. “We’re a partner with them,” Joan says. “They have an interest in working with us. They want this to look like a farm.”

“We’re fortunate to have this drive-by traffic,” George says. “We have a lot of steady customers who drive by and bring friends.”

Much of the winery’s growth is through word of mouth. About 60 percent of visitors discover the vineyard that way, while 20 percent stumble upon the winery while visiting the battlefield. 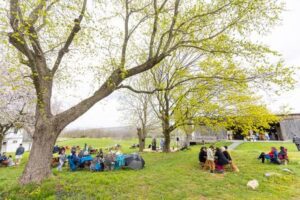 Two of the regular visitors and wine club members are Diane and Ken Putman, who live nearby in Keedysville. “They have a nice variety of white and red wine,” Diane says. “The price point is about where it should be for wines made in this area.” The Putmans like to enjoy the wine with a picnic meal and watch the wildlife.

“The scenery is beautiful,” she says. “They have fire pits sporadically, and there are lots of picnic tables and room to spread out. It’s tucked away, and a lot of people don’t know about it. For a young winery, they have some very drinkable wines.”

The good news for the Putmans and other regulars at Antietam Creek Vineyards is that George and Joan are considering adding another vineyard. “I’m so excited they’re going to plant more grapes and experiment more,” Diane says.