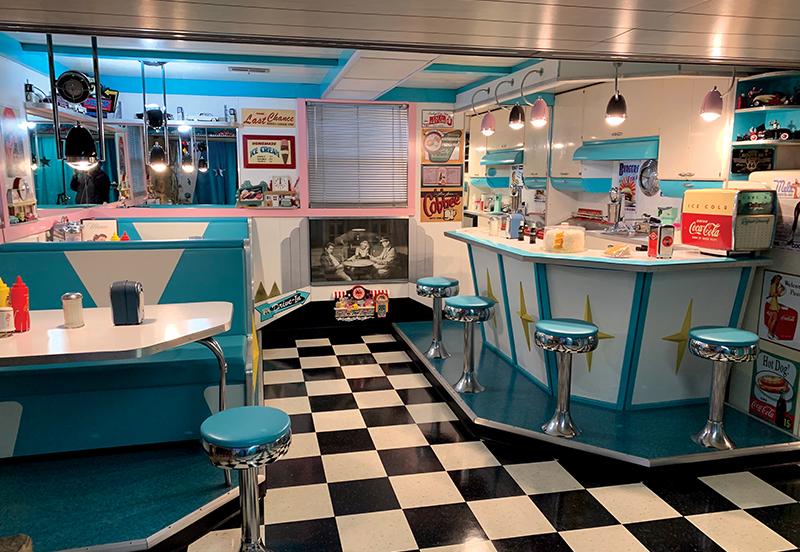 Halfway man transforms basement into a diner fit for the King.

HALFWAY — From the outside, Jerry Mullenix’s home is fairly un-assuming and fits nicely into his Halfway Maryland, neighborhood. But visitors get a glimpse of what awaits them inside as they pass by the ‘55 Oldsmobile in the driveway because once they cross the threshold and descend into his basement it’s like entering a time machine.

With the swing of the basement door, visitors are immediately transported back to the days when Elvis was king, soda fountain shops were hangouts, poodle skirts were in fashion, and cars were works of art.

Mullenix, 69, shares the home with his wife, Judy, 68, where they raised their family. During the pandemic, Mullenix has spent most of the time putting the finishing touches on his diner setting that will only be opened to family and friends. Amazingly, he’s managed to do all of that while battling Parkinson’s disease.

‘Memories Are Made of This’

The diner has been a labor of love and it shows in every inch of the 28-by 16-foot space. The basement floor is covered in black-and-white checkered vinyl. To the left are comfy turquoise-and-silver booths for dining on cheeseburgers and shakes. To the right, there is a ‘50s soda-fountain counter complete with stools and a nearby vintage refrigerator. In the opposite back left corner is a jukebox he made himself as well as a small pinball machine and a stage. The walls are covered with ‘50s memorabilia — some reproductions, some the real deal — that have been donated by others who share his love of America’s “Golden Age.” A front passenger side panel of a 1959 Cadillac is a piece of art that hangs to the right of the stage. It is painted black with yellow and orange flames and is complete with a working headlight. 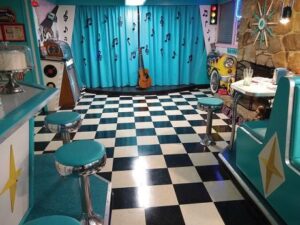 Many of the items have been created by Mullenix’s own hands mainly because it’s hard to find authentic items and also the fact that he enjoys building things. He worked in construction early in his career, building homes before the recession of the 1970s. He spent 28 years in sales with ABC Supply, which manufactures roofing supplies, before retiring. He also built the family home in 1976.

Although he is too young to have been one of the teeny-boppers of the ‘50s, the decade has always appealed to him.

Originally, Mullenix wanted to open his own ‘50s-themed diner in the old Virginia Avenue Burger Chef. His dreams were dashed when the restaurant was torn down. That’s when he had to think of somewhere else to recreate his diner. 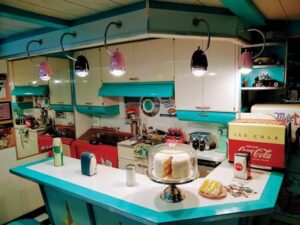 More than a decade ago, Judy said her husband brought up the idea to transform their basement into a ‘50s classic diner. Every so often, he kept on mentioning it to his wife as he slowly reshaped the basement. When he decided that it was time to commit to a diner experience, she says she supported him.

“I always knew he liked the ‘50s. Even way back when we were dating 50 years ago, he’d sing those songs to me in the car,” she says. The Mullenixes have been married for 49 years.

Before it became a ‘50s hangout, the basement had a Western theme for when their two sons were growing up. Over the years, they used the space for all sorts of family gatherings from birthday parties to Christmas. With their children grown, it was time to change the home into something different for the couple to enjoy with their 8-year-old grandson.

Nearly two years ago, Mullenix was diagnosed with Parkinson’s disease, a degenerative neurological disorder. He said his doctor guesses he had it probably five years before his diagnosis. It’s the same disease that Michael J. Fox has been battling. 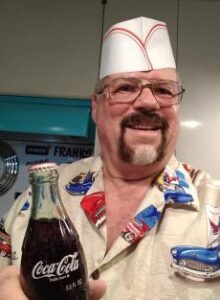 Judy says her husband has been an inspiration to others living with Parkinson’s.

“I’m glad and very proud that he’s fighting the Parkinson’s this way,” she says.

As for Jerry, he hopes others with Parkinson’s can see themselves in him.

“I hope I can encourage people with Parkinson’s to stay active and be happy. Do things for others, it takes your mind off it. If you don’t dwell on it, it won’t hit you as hard,” he says.

‘Rock Around the Clock’

Judy said she is impressed at the way her husband has been able to transform the space.

“He could see things that I couldn’t necessarily see,” she says.

The first pieces that inspired him are the set of stools that now add seating in front of the soda fountain counter. He purchased the stools out of Carlise, Pennsylvania, for $60 for half a dozen. He was told they came out of an old ‘50s diner but were in a bit of a rough shape. It took some hours polishing them and removing the rust to get them to gleam again. He also replaced the seats and built the risers they sit upon. The white front panels to the countertop were built by Mullenix and the gold stars that adorn each is from an old Pontiac dealership. 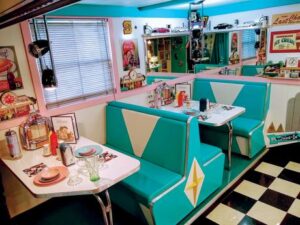 The soda fountain countertops he fabricated himself, but the 1955 white Lyons kitchen cabinets were a find off of eBay that he adjusted for the mini kitchen space.

The booths look straight out of an old diner, but yet again, Mullenix designed and built them with his own hands along with the tables to give the space an authentic ‘50s feel. Beside the stage is a jukebox that Mullenix says cheats the eyes of collectors by giving the illusion of an actual jukebox panel but with modern amenities.

“I’ve had jukebox collectors say ‘Where did you get that jukebox? I want one,’ and I said, ‘I don’t know if I could build another one,’” he says with a laugh.

Many of the items he said were created from things he just happened to have around his home.

“It’s just like the side pieces on the stage up there. Those are all door panels. I just cut them to shape and put an edge on them,” he says.

A few items are gifts from friends such as the Astro clock that’s above the fireplace. He even has old local restaurant menus with dishes and prices listed. A framed brochure from the Hiway Drive-In that was once in Hagerstown lists the movies that were shown at the time, including the 1954 Jimmy Stewart and Grace Kelly classic, “Rear Window.” And he has a signed still from his favorite 1950s-themed movie, “American Graffiti.”

Once all of the COVID-19 restrictions are lifted, everyone is vaccinated, and it’s safe to congregate with family and friends, Mullenix is looking forward to hosting get-togethers. He’ll encourage others to dress up for the theme, but there is a strict no alcohol and no cigarettes policy enforced in the diner. And on the menu that night?

“Burgers and fries, of course,” he says with a laugh.