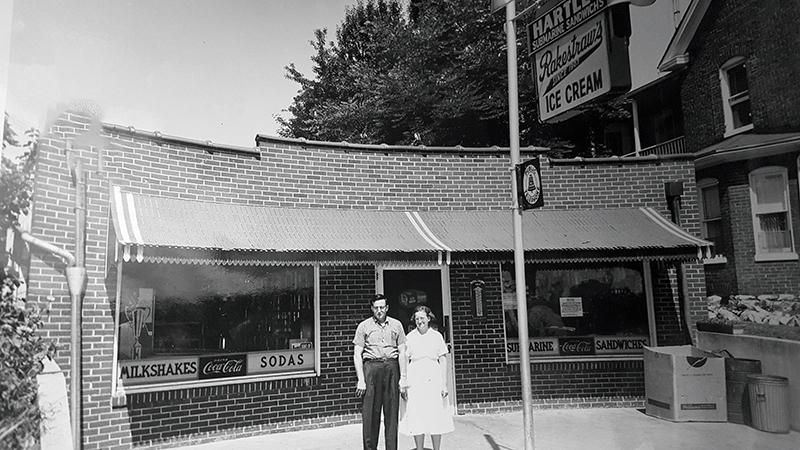 John Allen Hartle, who went by Allen, was working as a milk truck driver for Superior Dairy when he became friends with William Hurd, who owned a grocery store at 635 South Potomac Street – the same building where Hartle’s would later be located. Allen would sometimes ride to New York City with Mr. Hurd to pick up inventory. It was during one of those visits that Allen ate (what the New Yorkers called) a “hoagie” and found it delicious. Allen thought that the rolls looked like submarines and began calling them subs. He thought the subs would be well received by the Hagerstown community; and in 1955, he and his wife, Margaret Kershner Hartle, purchased the grocery store building from William and Maxine Hurd. They opened Hartle’s Confectionary, as it was known at that time.

In the beginning, the sub rolls were purchased from a bakery in New York City.  Allen would walk to the local bus depot to get the rolls off the bus. The family reminisced about those first submarine rolls; kids in the area loved to buy the rolls with just butter on them for a nickel. Later the rolls were purchased from H & S Bakery in Baltimore. Allen, or someone in the family, would go to Baltimore two or three times a week to pick them up. Allen was still working at Superior Dairy at the time and would make whole subs, cut them into quarters, and give them to his customers on the milk truck route. What better way to introduce them to the public! It wasn’t long before those tasty sandwiches began to bring in customers, many of whom remained loyal to Hartle’s for years to come.

Allen’s great idea certainly gave Hagerstown a unique place to eat for more than 40 years. If you are old enough to remember this fine sandwich shop, consider yourself lucky because it was surely one of a kind.