Belly up to the Bar 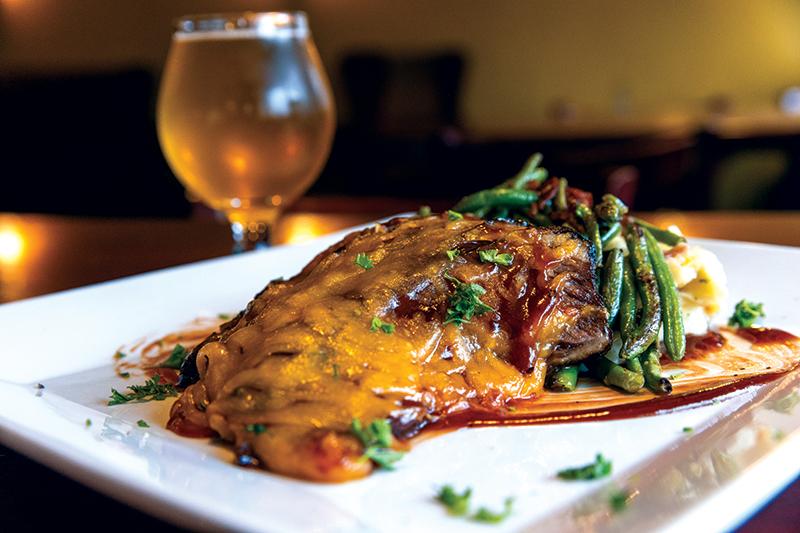 First-timers to Dan’s Restaurant and Tap House on the square in Boonsboro will be forgiven if they fall for the tongue-in-cheek “news articles” posted on their menu and website, detailing the eatery’s fanciful association to gangsters, bootleggers, and assorted colorful personalities throughout the last hundred years or so. The stories fit the character of the place with its cozy, vintage appeal of dark, richly-grained wood, exposed brick, stained glass accents, and stamped copper ceiling tiles. The building has seen its share of history. Built between 1820-1850, the main structure housed incarnations of other restaurants, shops, a Civil War hospital, and even the town’s post office for many years. The truth is a much briefer affair. Dan Aufdem-Brinke and partner/ex-wife Charlotte opened the doors in July 2012.

That’s a good, long time for any place to stay afloat in the volatile restaurant industry, so they must be doing something right, especially as the country crawls out of a pandemic that clobbered small businesses. Industry stats paint a decimated landscape with one in six independent eateries permanently shuttered. This time last year, restaurant sales plummeted to less than 25% of normal. Through the challenges, Dan’s Restaurant and Tap House remains a place for dedicated fans and new friends to find American pub-style food in a casual atmosphere. When we caught up with Dan (the person), state authorities had just lifted capacity limits for outdoor and indoor dining and the tap house patio was open for seating. Cars zipped along the main thoroughfare as customers trickled in for early dinners, replacing the leisurely lunchers who chatted amiably among friends over baskets of denuded wing bones and empty glasses.

Dan is no stranger to the food industry. He recalls starting as a “bus kid” at the venerable Old South Mountain Inn, up Route 40 toward Middletown. It’s where he met one of his current bartenders and learned the basics of hospitality. For a while, he also spent time in retail management, picking up a balanced appreciation for what it takes to run a successful business. As a newly minted husband and father, he made extra money delivering orders for Asaro’s pizzeria, a Boonsboro landmark for 25 years. Eventually, that side-gig brought him back into food service. When the original owner retired, the Aufdem-Brinkes took over. At one point, the family owned several places in town, but Dan and Charlotte decided to focus on the new tap house.

The pair joined two historic buildings by cutting through a wall and giving the place its current split-level dynamic. “Downstairs” is the main dining room, while the bar dominates a narrow, golden-hued realm “upstairs,” complete with 34 American craft beers on tap. Beer selections rotate as soon as a barrel is done. Each variety might last a week or two, but specialty draughts from in-demand brewers can tap out in just a day or two. The house uses Untappd, a popular geosocial networking app that lets beer aficionados know what’s flowing and where, practically by the minute. Guests might find selections such as Olde Mother’s Snowball Fight, Elder Pine Brewing & Blending’s Illicit Solarium, or Aslin Beer’s Old Town Lager. Patrons can opt for a flight if several offerings spark their fancy.

Dan says he has a soft spot for Bell’s Two Hearted Ale and a deep appreciation for the creative brews they get from the Cushwa Brewing Company in nearby Williamsport. (Read about Cushwa Brewing in Hagerstown Magazine’s January/February 2021 edition.)

“We always carry two or three of their beers on tap and they sell out quickly,” says Dan, heaping kudos equally on the brewmasters and the restaurant’s Bar Manager, Alex Thaggard. “Alex started with me as a dishwasher during high school and worked his way up. He has awesome knowledge of craft beer.”

On the food side, Dan gives credit to Chef Brandon Easterling. “Ours is a very collaborative menu,” continues Dan, noting that their newest compilation is hot off the presses. “It’s not big, but we always try to have a nice balance, so there’s something for everybody.” Fans can rest assured that their ever-popular grilled sea scallops, another of Dan’s personal favorites, remain on the list. This version boasts creamy hollandaise, bacon, briny caper berries, tender pea tendrils, and a dash of classic Old Bay seasoning.

Now, with increased seating available and better weather for travelers and day-trippers, the restaurant reinstated themed happy hours and live music, too. Performers take over a nook by the front window every other Friday from 7-10 PM. There’s no cover charge and a late-night menu keeps the pack well-fed. As of this writing, restaurants are allowed to offer take-out alcohol as well, so it’s the perfect excuse to pick up a feast to-go, complete with drinks, even when you can’t stay for a meal.

The restaurant is convenient to Antietam National Battlefield, Washington Monument State Park, Crystal Grottoes Caverns, and other quaint towns to explore, which opens the door to great picnic possibilities. “People would come and get a ton of wings, burgers, and fries when we were take-out only,” says Dan, who suggests pairing any of those favorites with a refreshing Cobb salad made with locally-grown ingredients from South Mountain MicroFARM™. The Tots platter and oversized Bavarian pretzel with cheese or crab dip also travel well.

“Local support is what makes a small business work,” shares Dan, who espouses a strong sense of community. “Over the years we’ve pulled from Frederick and Hagerstown and people come consistently. They don’t mind driving a little bit to get to us because they know they’re going to get awesome food and great beer, served by a friendly staff.”

Apparently, you don’t have to be a bootlegger to enjoy a repast at Dan’s Restaurant and Tap House.