What’s the Buzz All About? 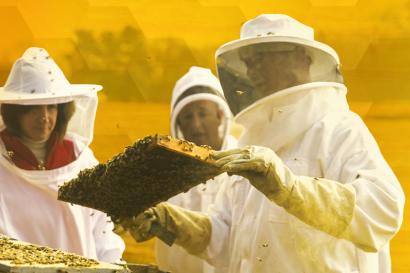 Beekeeping in Washington County is growing in popularity.

By James Rada Jr. and photography by Turner Photography Studio

Louis Capezuto started raising bees to get rid of his allergies. He used to suffer from severe allergies until a friend recommended he take a spoonful of honey daily. Capezuto figured that he had nothing to lose so he tried the remedy, and when allergy season rolled around again, Capezuto found that his allergies were reduced.

He decided to cut out the middle man, save money, and work directly with the bees for his honey. He quickly discovered that raising bees was not as easy as overcoming his allergies.

That’s because he had trouble keeping his bees alive through the winter. He just didn’t have enough knowledge about how to care for bees. Luckily, he found a mentor who was also the apiary inspector for the Maryland Department of Agriculture. Capezuto learned beekeeping so well that when his mentor retired, Capezuto was offered the job as an apiary inspector for the region.

He also continued raising bees on his own. He now has around 300 hives and works as a beekeeper full time. His business, Honey Hole Apiary, in Clear Spring, sells raw, local honey, bee’s wax products, and just about anything a beekeeper might need to get started raising bees.

Anne Himes of Boonsboro is new to beekeeping, so new that she doesn’t even have her bees yet. She is waiting for them to arrive. And no, they won’t be flying to her property in a swarm. They are shipped in boxes.

Her beekeeping journey began as an attempt to talk her mother into beekeeping to give her something to do. Himes found information about a short course on beekeeping. By the end of the course, not only was Himes’ mother interested, so was Himes. They gathered more information and joined the Washington County Beekeepers Association to learn how to take care of bees and raise them properly. They also bought the supplies they would need to get started.

Fred Smith, with F&D Apiaries, said joining a beekeeping club or association is the best thing a new beekeeper can do. Not only does the organization offer classes, but “they can partner you with someone who is keeping bees and can help you.”

While beekeeping is not expensive, there are set-up expenses. These include hive supplies, an extractor, a smoker, and protective clothing. These add up to a few hundred dollars to get started, but it may be nearly all of your costs for years except for the cost of bottling the honey.

These initial costs are unlikely to be covered in the first year you have a hive, because it takes time to get a healthy hive established. Once a bee hive is established, it takes about an hour a week to care for each hive. Keep the hives in the sun and near a source of food. Once a week or so, beekeepers will check the hives to make sure there is enough room for the bees.

“I want to see if I can keep a hive going and maybe have a little honey for myself,” Himes said.

She already enjoys gardening, so having bees around will help pollinate the flowers and plants in her garden.

Himes is still nervous about being stung, but other beekeepers have told her it doesn’t happen often and you get used to it. In fact, Capezuto recommends working with bees without wearing gloves.

“You don’t realize how rough you are with the bees with gloves on,” he said. “That angers them and leads to getting stung. If you aren’t wearing gloves, you slow down and are much more careful.”

Bees range for up to 2 miles in their search for pollen. They will collect pollen from whatever plants are in the area. The honey is usually identified by the plants the pollen is collected from, such as clover honey or orange blossom honey.

Beekeepers with lots of hives will spread them out so that the bees aren’t competing for pollen sources. Capezuto has hives in three states in 23 locations.

The hives that beekeepers maintain are boxes stacked on each other. The boxes are about 18 inches square and 6 inches high. Each box is open on the top and bottom to allow the bees to move from box to box. Within each box hangs a series of frames on which the bees can build their honey-combs. As the frames in one box fill up with comb and honey, additional boxes are stacked on top.

When the time comes to bottle honey, the frames from the hive are placed in an extractor, which is similar to a large centri-fuge, and spun. Honey is pulled out of the comb and falls to the bottom of the extractor where it drains out a spigot into a bucket.

“There is a big demand for local honey,” Smith said. He maintains about 100 hives he collects honey from to sell in his Williamsport store. Beekeeping has been successful for his family. F&D Apiaries has four generations of Smiths working in it.

There are a few ways that beekeepers can start a hive. They can buy bees and a queen and place them in a hive. They can capture a bee swarm, or as is often the case, they remove a hive from a house.

Winters can be hard on bees as they go into a period of dormancy. If the hive hasn’t collected enough honey during the summer, the bees can starve. Hives can also freeze if it gets too cold. Bees will cluster in a tight ball and move around little when the weather is cold. The colder it gets, the less the bees will move away from their cluster. Beekeepers will also regularly examine the bees in their hives for signs of disease. Mites are a particular problem that can kill bees, but there are also wax moths and other creatures that can also be deadly.

Beekeeping has roots that go back to ancient Egypt. Workers keeping bees can be seen on the walls of ancient Egyptian temples. They knew what modern beekeepers know. Not only can bees be a source of honey and wax, but having them around improves the pollination of plants and flowers nearby. According to the U.S. Department of Agriculture, “Bee pollination is responsible for $15 billion in added crop value, particularly for specialty crops such as almonds and other nuts, berries, fruits, and vegetables. About one mouthful in three in the diet directly or indirectly benefits from honeybee pollination.”

Smith keeps around 700 hives, and while he collects honey, his main income from his bees is their pollination work. Farmers hire him to set up hives on their farms to pollinate their orchards and fields. His bees pollinate apple orchards in Smithsburg, blueberry fields in New Jersey, and cucumber fields on the Eastern Shore.

“They say that every third bite you eat is pollinated by a honey bee,” said Greg Gentry, president of the Washington County Beekeepers Association. “Bees do a lot of work for people, and we don’t realize it.”