The Little Cabin That Could 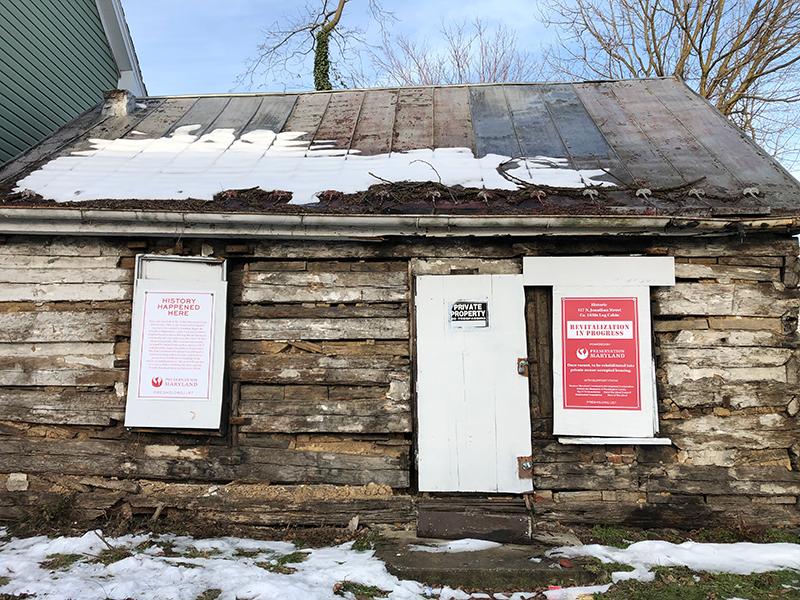 The centerpiece of Hagerstown’s storied Jonathan Street is a rough hewn​ ​log cabin – not what you might expect to see in this urban, four-block, one-way thoroughfare. Yet, ever since an untimely collision with a city police cruiser in 2018, the impact’s true intentions have surfaced – to unify this community through its culture.

With each passing day, the more that is learned about the 800-square foot cabin, and its ensuing preservation and rehabilitation, the more the city’s seminal beginnings, and the diverse evolution of one of its historically overlooked neighborhoods, unfold. 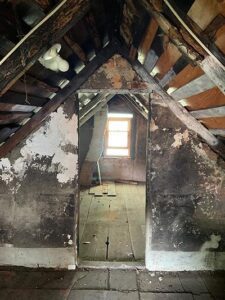 It’s like discovering a time capsule hidden away for the better part of 300 years. Inside, bits and pieces frame the moving picture of a centuries-old Jonathan Street – so named for Hagerstown’s founder, Jonathan Hager – and its transition from a hardscrabble European-American settlement into a vibrant African-American community that fell into decline when a highway was relocated.

From his office at Public Square in downtown Hagerstown, Reggie Turner’s index finger maps the intersection of Franklin and Jonathan streets. Turner, a financial advisor by profession, serves the Maryland Commission of African American History and Culture as a member. His forefinger navigates the journey, block by block, as his voice narrates the documentary as smoothly as he might trace the creases in the palms of his hands while spilling his life’s story.

But first, to understand the significance of the Jonathan Street cabin’s discovery, it’s important to dip a ladle into its past. Between the years 1739 until 1765 Jonathan Hager Sr., himself a German immigrant, accumulated 2,488 acres known as “The New Work.”

When Hager laid out the town in 1761, was Jonathan Street – not yet named and laying far beyond the outskirts, edging the rural fringes – furthest from his mind?

With nearly 2,500 acres of land all to herself, Elizabeth Hager attracted a suitable husband and married Upton Lawrence in 1803. A year later, in 1804, parcels of land previously known as The New Work, Dickson’s Ramble, sections of Dry Pond, Hager’s Fancy, and Russia Corner, were re-surveyed as one 1,050-acre tract. Yet, it’s not until 1833, at age 48, that Elizabeth Hager Lawrence advertised lots for sale in the Hagerstown ​Torch Light​ offering large improved and unimproved properties, including a listing for “Twenty-five lots on Jonathan and Locust streets extended, containing from one to five acres a lot, as may suit purchasers.”

In 1836, Issac Clark purchased “Lot No. 3 lying on the Greencastle road fronting the said road eighty two [82] feet and running back two hundred and forty feet on the South side of Polly Clines Lot No. 4.” Sometime between ​1837 to 1840​ a one-story log “Dwelling House” was erected on the property. The one-story log house at 417 Jonathan Street forms the core of the house standing today.

Through the core sampling of logs, a dendrochronology study led by Julie Schablitsky’s team proves the cabin was cobbled from recycled 1739 timbers. The logs may have been dismantled from Hager’s own homestead almost two miles away.

“The Hager homes were the only ones around at that time,” says Preservation Maryland trustee and project architect, Ann Powell, principal of Ziger/Snead Architects. She recalls her first visit to the cabin in the winter of 2020.

“Mostly, it feels like a little old cabin,” she says, finding the interior gutted of furnishings and fixtures; old windows in disrepair, subflooring covering half the ground floor with wide-plank authentic wood floors covering the other half. The trim, too, is authentic to the structure, though it’s hard to say it is original. 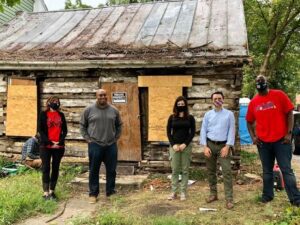 The crawl space beneath the foundation reveals an assembly of brick piles and between them, the fill of centuries of trash. This was where Schablitsky discovered clay pipes, toy fragments, and in the backyard, an 8-track. Upstairs, attic eaves were insulated with relic cardboard boxes stapled to the walls, “the scars of its history,” Powell says. She brought ​in a structural engineer and log cabin experts to the second site visit.

“They quickly … realize that this was not in its original configuration,” Powell says.

“It was common practice to recycle building materials – window frames, doors and, in the case of the ​Jonathan Street cabin timbers,” when and where the itinerant populations wished to move. “Eighteenth and 19th century, wood was green gold,” Schablitsky says​.

In the 100 years that passed from Hager’s first appearance, he had attracted his countrymen to his neck ​of the woods; and while his European-American settlement established a foothold, a second coming of ​sorts was rising. Turner sees a turning point with the construction of the Asbury Church in the 100 block in 1818. The church became a haven of worship for a growing black congregation marking the blending of cultures on Jonathan Street.

“As we get closer to the Civil War,” Turner says inching his finger into the 400 block, “African-Americans were shuffled into Jonathan Street.”

Nick Redding, Preservation Maryland Executive Director notes, “The people who took care of the city, ​the craftspeople, janitors – black and white – lived on that street. Unquestionably, the Jonathan Street corridor saw underground railroad activity; nothing we can point to directly; but, tax records go back to the plague, which would be the early 1800s – late 1700s. Because we have done the deed research,” Redding says, “we have a pretty good understanding of the families who lived here.” Families with 3-4 children, primarily tenants; and, then, more recently, following a period of transitioning to low-cost housing, occupants were largely impoverished.”

The Jonathan Street corridor, Turner says, was marked a Red Line neighborhood. Redlining bisected contiguous communities and devalued property in what powerbrokers considered marginal neighborhoods. Even though the practice was overthrown when the Fair Housing Act passed in 1968, Turner hopes to erase the stigma.

Shablitsky’s stewardship supports Turner’s mission by providing a link between the historic cabin and transportation routes. “Looking at the evolution of Jonathan Street … the mixed race community became a containment area for black families during the Civil War years; and during the subsequent ​Reconstruction, it appears many black businesses flourished.”

The most popular businesses may have been listed in the Green Book and may have been visited by motorists traveling U.S. Highway 11, the main artery linking New York to New Orleans, and West Virginia, Pennsylvania, and Maryland together. The highway follows 18th century Native American trails and formed a pair of turnpikes in the 19th century with Hagerstown as the hub. In 1926, Jonathan Street was one of three, including Virginia Avenue and Potomac Street, designated portions of Highway 11. When Highway 11 was moved in the late 1980s, paving the way for I-81, the Jonathan Street economy wobbled. 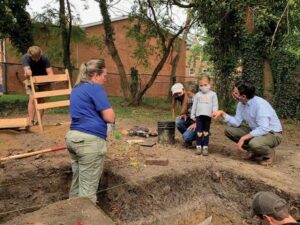 “Highway 11, which brought a lot of business into town before it moved West,” Schablitzky says. “The cabin may not be a highway project but we believe it will excite the public. That is the reason we partnered up with the Jonathan Street project. We want to make the state of Maryland a better place to live and travel, and give back – to build community, through the realization of their past.”

Back to the Future

Redding, and Powell, Schablitsky, and Turner rolled up their sleeves and began in earnest to create an ambitious timeline for rehabilitating the historic structure and … In the coming months, passers by may see more activity on Jonathan Street as the cabin at 417 undergoes a complete rehabilitation.

Renovation and reconstruction began in mid-January this year, and weather permitting, the ​selective demolition of non-historic features and materials follows into late winter months at which point passers by may begin to see the lifting of the structure to rebuild the foundation, extending it by one foot.

“We have to get the logs out of the dirt,” Powell says. And though Redding says, “People love the look of log,” that look is tricky to maintain. “Eventually it will become someone’s home, too,” he adds.

For those reasons and others the stakeholders have carefully decided the logs will be covered with Hardie Plank, a sustainable concrete building material, and the authentic two-over-two sash windows will be replaced with new materials in the same style. A door will be chosen that is consistent with the 1830s when the house was assembled on its site. Significantly, a new addition to expand the footprint where an original, historic addition once stood.

“We expect rehabilitation to be complete by mid-to-late spring and a ribbon cutting this summer,” Redding says. “Ultimately, as a part of a broader strategy to revitalize the neighborhood, this building will become owner-occupied housing and a qualified buyer will be identified by Habitat for Humanity of Washing-ton County.” 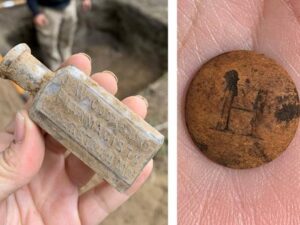 To date, the project has received $250,000 in funding in the form of a direct line item from the Maryland General Assembly, and, so far, $75,000 in services from Schablitsky’s unit. And there is more coming with national support and recognition from The 1772 Foundation, and Maryland-based groups like The Middendorf and The Delaplaine Foundations and the Rural Maryland Council.

“2021 will be our 90​th​ year and we haven’t bought a building in about 45 years, half that time,” Redding says. “With this project we are catalyzing a redevelopment ​conversation around the neighborhood – having some excitement around it; and, then we are going  to put somebody in it.”

How will the cabin’s history be celebrated after the ribbon is cut and the new resident is moved into the home?

“Reggie Turner and Tereance Moore have formed the Western Maryland Community Development Corporation – a new organization that will carry on the future revitalization work ​spurred on by this first project,” Redding says.

“For us, this isn’t one project,” Powell says. In the next 5-to-10 years she sees the realization of subsequent projects like the reinterpretation of the former Coca Cola bottling plant into an African American museum. “The whole point of this project is to build awareness and unify the community.”