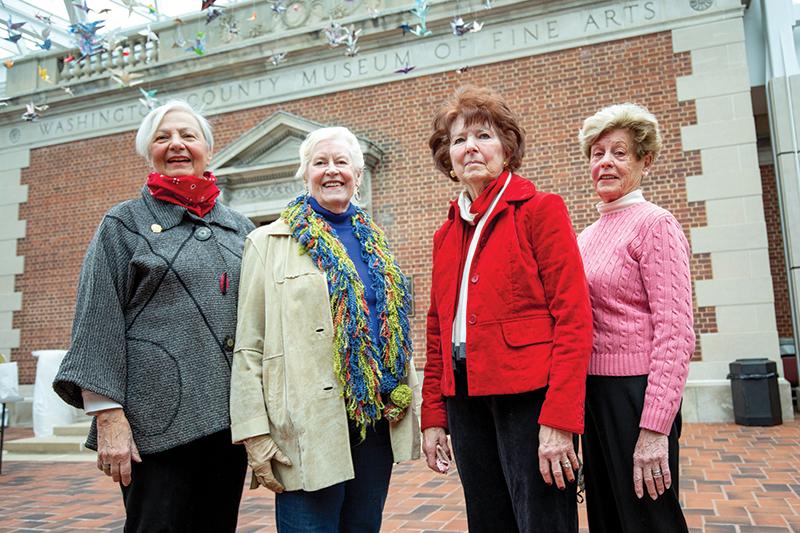 The Hagerstown Garden Club has cultivated beauty and a sense of community for more than 90 years.

By Jennifer Mellace and photos by Turner Photography Studio

More than a century ago—1891 to be exact—the first garden club meeting in the United States was held in Athens, Georgia, at the home of Dr. Edwin Dorset Newton, a physician with a deep interest in gardening. The club’s purpose? To study horticulture and dedicate the exchange of plants and ideas for the betterment of the community. Thirty-six years later, in 1927, this same purpose was behind the creation of the Hagerstown Garden Club, and it still exists today.

“The garden club was created in 1927 after the Washington County Museum of Fine Arts was given to the city of Hagerstown by Anna Brugh Singer and her husband who was an artist,” explains Tina Angle, the 45th and current president of the club. “Anna Brugh Singer needed a committee to help design and plan the grounds surrounding the museum, and the garden club was created.”

The Hagerstown Garden Club grew in popularity and was federated with the National Garden Club in 1931. Part of the requirements of being a federated club was to perform educational and environmental projects throughout the community, and this was something the Hagerstown group had no problem tackling. From its inception, the garden club has worked closely with the community not only on beautification projects but also to raise funds for local historic preservation such as the Hagerstown Day Nursery, Western Maryland Hospital Center, Washington County Historical Society, Clear Spring Historical Society Plummer House, and restoration of Burnside Bridge.

One of the club’s well-known donations to the city is the Park Circle Fountain and gardens surrounding it. “The club gave the fountain to the city and we maintain the gardens during the summer,” says Angle. She points out that the fountain is one of the anchors for the Hagerstown Cultural Trail, which connects two of the city’s most popular destinations—the downtown Arts and Entertainment District with City Park and the Washington County Museum of Fine Arts.

Gardening and the appreciation for the environment is something the National Garden Club has endorsed from its beginning, and each year they choose a theme to help promote this agenda. This year the national theme is “Plant America” and the Hagerstown Garden Club chose “Planting Washington County for Beauty and Wildlife.” As part of this promise, club members continue their work around town including their ongoing collaboration with the Hagerstown Day Nursery. “For years members have not only served on the nursery’s board, but have also offered garden therapy to the 2- through 5-year old’s who attend the school,” says Angle.

Garden therapy, also known as horticulture therapy, has been recognized since the 19th century when Dr. Benjamin Rush first documented the positive effect working in the garden had on individuals with mental illness. According to The American Horticultural Therapy Association, in the 1940s and 1950s, rehabilitative care of hospitalized war veterans accepted the practice of horticulture therapy, which continued to gain credibility over the years. Today, it is accepted as a beneficial and effective therapeutic modality and is used in a broad range of rehabilitative, vocational, and community settings.

“This year, the pandemic has caused people to be at home and many have reconnected with nature and the cycle of life. Gardening, during the time of COVID-19 and always, renews your spiritual being, rhythm, energy, healing, and self-confidence,” says Angle who joined the club after she retired in 2011. “I always enjoyed herb and flower gardening, but after I retired, I became interested in flower arrangements and took a floral design class at Hagerstown Community College. It was therapy for me. I couldn’t wait to take my Monday class.”

While gardening trends have grown this past year, membership in the Hagerstown club has declined in recent years. Past President Carolyn Wright has been a member of the club since 1967. Born and raised in Middletown, Maryland, Wright moved to Hagerstown after marrying and joined the garden club, which she learned about from her mother-in-law. “I enjoyed gardening before joining, but learned so much from the interesting guest speakers and the house and garden tours. I made so many friends through the club.

“We were extremely active with more than 10 garden clubs in the area. Today so many women and men work outside their homes and don’t have the time, so membership has declined.”

Both Angle and Wright hope there will be a resurgence of interest with so many people staying home due to COVID. “Gardening brings so much to a person’s life and the garden club develops not only the interest in flowers and gardening but also in friendships and working within the community,” says Wright.

The club has monthly meetings, which are currently being held via Zoom. Members are also offered at least nine different programs discussing things like herb and butterfly gardens. Of course, the pandemic has altered some events, including the cancellation of the club’s 2020 Art in Bloom event. This annual fundraiser benefiting the museum has raised thousands of dollars over the years and is always a big hit with people in the community.

“The Art in Bloom event brings together different floral designers from all over Maryland and the Gettysburg area,” explains Angle. Each designer is assigned a piece of the museum’s artwork–a painting, sculpture, or decorative art– which they are to interpret using plant life. “The museum selects works and the floral designers come for a meeting where they get to see the artwork and take a picture. They then come back with their design, which needs to be designed using live or dried plant material.”

The event is not a competition, just an opportunity for the floral designers to express their artistic view. Monies are raised from the ticketed preview party and by sponsors of the event, which is then opened to the public. Fortunately, the committees are at work planning for the 19th year of Art in Bloom. This year’s virtual Retrospective of Art in Bloom will launch on May 11 and continue through June 15.

To learn more about how you can become a member or simply support the Hagerstown Garden Club, email hagerstowngardenclub.com.