In the Business of Giving Back 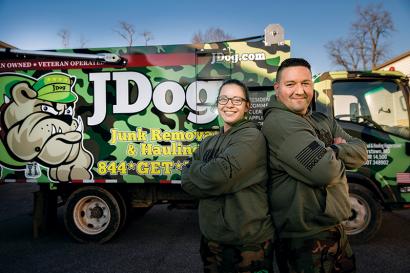 By Jennifer Mellace and photos by Turner Photography Studio

“A rising tide lifts all boats” is a saying Aaron Mowery, Army veteran and owner of JDog Junk Removal and Hauling in Hagerstown, strongly believes. While it was his entrepreneurial spirit that led him to purchase a franchise in October 2020—a year that saw much grief and loss—it may have been his heart for service that led him to this particular company.

A Hagerstown native, Mowery served in the U.S. Army from 2009 to 2012, which included a tour in southern Iraq. Once home, he and his wife, Amber, began their search for a business of their own. “My wife and I have always been entrepreneur-minded and believed in owning our own business and being a bigger part of the community,” says Mowery.

The couple started looking at various franchises, but the ones they were interested in didn’t work out because of complications triggered by the COVID-19 pandemic. But perhaps that was for the best, because those non-starters eventually led them to JDog, a nationally-recognized brand offering franchise opportunities exclusively for veterans to help them explore business ownership and transition from their time in service. 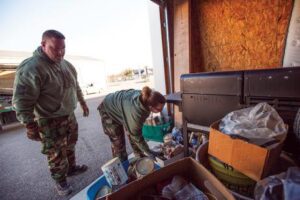 “We came across JDog on Facebook and saw that they were a veteran-owned business,” says Mowery. Wanting to learn more, they reached out and were invited to the company’s headquarters in Philadelphia, Pennsylvania. “We were invited to their discovery day to learn more about JDog and who they are. We fell in love with the people and the culture. They gave us the feeling of being family instead of just a business—that is how their business model is set up.” Mowery also recognized the camaraderie that he found in the military—that supportive, tight-knit community that, in this setting, offers help to all franchise owners.

JDog was founded in 2011 by president and Army veteran Jerry Flanagan and his wife Tracy. They recognized the struggle for veterans entering back into civilian life and wanted to offer something that could help other military families through this difficult process. They committed themselves to creating entrepreneurship opportunities exclusive to veterans and their families. Knowing this was the business they wanted to invest in, the Mowerys got their financing, went through training, picked up their hauling truck, and were ready to get to work. 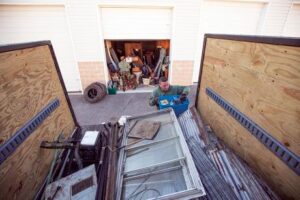 Giving back to veterans is important to Mowery because “not every veteran comes out the same way they went in,” he says. Today, he is in the process of looking for employees and, along with all JDog franchisees, aims to hire more veterans to reduce the nation’s veteran unemployment rate to less than 1 percent. In November 2020, officials from the Bureau of Labor Statistics said that the national veteran unemployment rate was 6.3 percent.

While the mission behind Mowery’s business is to employ fellow veterans, it’s also to provide customers with exemplary service. The JDog brand believes in showing up on time, in uniform, and respecting the customer’s property, and this was something Mowery could firmly stand behind. “I believe in handling every job and every customer with respect, integrity, and trust—this is the military way,” he says.

This professionalism starts from the moment Mowery receives a call for his services. He will first meet with customers to assess the job and then offer an estimate. Once hired, he and his team remove junk and unwanted items from homes and businesses—everything from old mattresses to scrap metal. The only thing they don’t take is hazardous waste. Mindful of the environment, the goal is to recycle and donate 60 to 80 percent of the junk they haul, keeping as much as they can out of the landfill. 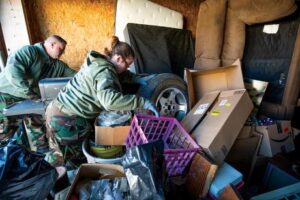 Donations from Mowery’s business comes in several ways. One way is in the form of monetary contributions to organizations like Platoon 22, a Frederick-based nonprofit that assists veterans in the transition back to civilian life. Help also comes by way of gently used items that can be provided to veterans who can’t provide for themselves. Mowery often donates items to the veterans group Come All Who Are Thirsty in Sharpsburg.

Mowery always has an ear to the ground for folks who are in need. An example of this came shortly after his business started. “A week and a half in to our start, we had a piano that needed to be picked up,” recalls Mowery. “My uncle is a musician, so I asked him if he knew of anyone who could use it. He knew a family—the husband is a 20-year veteran and the wife a 27-year veteran—who had a 13-year-old autistic son who wanted to play. Their son is beyond excited to have this piano in his house.”

In addition to donating money and gently-used items, Mowery is looking to team up with other local businesses to offer help whenever and wherever it’s needed. For instance, this past December he worked with other local businesses on a big Christmas project to send boxes of personal hygiene and other goods to an overseas military unit to give them a feeling of home while they were away for the holidays. 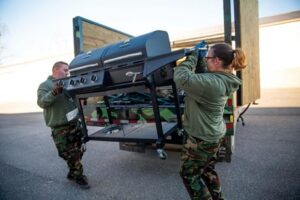 Mowery’s altruism and service goes hand-in-hand with the core values and belief behind the JDog brand, which is also home to the JDog Foundation whose mission is to develop and implement programs and services for veterans with a focus on suicide prevention, PTSD, and higher education programs.

For Mowery, JDog Junk Removal and Hauling is most certainly a business that supports him and his family, but it’s also more than that. It’s a way to give back to his military family.

To learn more about JDog Junk Removal and Hauling or to schedule an estimate, visit jdogjunkremoval.com.