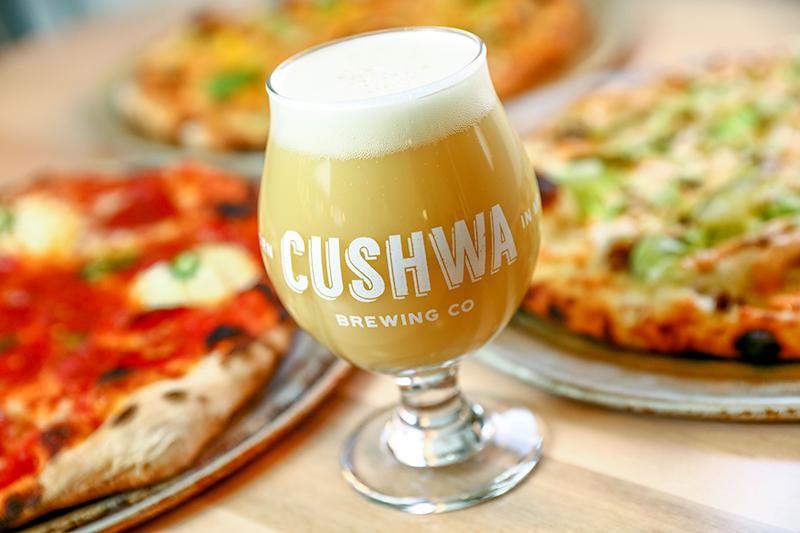 Cushwa Brewing and Rad Pies make up Williamport’s own slice (and sip) of heaven.

If a dog is humanity’s best friend, beer must be a close second. Archaeological evidence traces brewing back to the dawn of agriculture, most likely originating in western Iran. Its flourishing practice and continued popularity confirm the enduring love story. Pizza didn’t make the scene until creative bakers in Napoli added new-world tomatoes to their traditional flatbreads in the 1700s, but there is some-thing to be said about the magic that happens when friends, food, libations, and beloved pets come together. That’s what you’ll find at the Cushwa Brewing Company in Williamsport, just outside of Hagerstown.

Owner Scott Coleman started homebrewing in 2004, delving further into the hobby after teaming up with friend and fellow beer enthusiast Marcus Thomas around 2009. When the opportunity to open their own brewery came into focus, they enlisted a third friend, former Boonsboro resident Garrett Chambers, who was working at a brewery in Vermont. Garrett moved back to Maryland and the triumvirate transitioned out of their home kitchens, opening the Cushwa Brewing Company in Bowman Business Park on Governor Lane in January 2016. Named in honor of the nearby C&O Canal’s Cushwa Basin landmark, the business is dedicated to exceptional beer, positive impact, and respect. 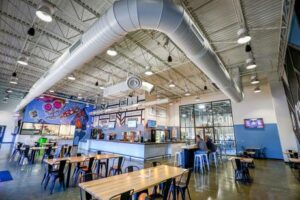 Their original five-gallon rig still has a place of honor in Cushwa’s office. It is a reminder of how far they have come, from 14 barrels of fermentation capacity at their grand opening, doubling up to 28 barrels just a few months later. By January 2020, they moved into substantially larger digs in the same plaza with 194 barrels. (A standard beer barrel holds about 31 U.S. gallons.) Now, new equipment is coming that will boost capacity to 314 barrels, just in time for their fourth anniversary on Jan. 30. The brewery’s “hot side” includes making the wort and sugar water. The “cold side” of the process applies to fermentation in the cellar. That’s where carbonation happens. A huge glass wall gives visitors a peek at the process. “Grain to glass” times average about 18 to 21 days. Then each batch is divvied among kegs and cans for distribution or tapped for on-site purchases, with the split running approximately 50/50.

“For the most part,” says Garrett, “brewers can use the same ingredients but come up with vastly different products.” That makes quality ingredients an imperative. He grins, “Hops shine for us.”

Fans learned quickly to count on Cushwa for bold, hop-forward varieties, fruity sours, rich stouts, old world styles from England and Germany, even a house hard seltzer. In the past few months, they’ve put out a blueberry Imperial maple waffle stout, a lemonade bubblegum sour, and a brew reminiscent of cherry-topped funnel cakes. Sundays are for “beer-mosas.” 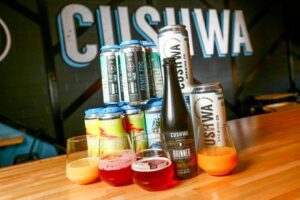 Moxie, Cushwa’s unofficial four-legged mascot, settles herself under the table as Scott expands the thought, “Brewing is a unique industry. It is less competitive than most, more collaborative. That is one of our favorite parts about our job.” The self-taught trio often travel the country, working special projects with like-minded brewers. Those creations wind up on the tap list, too.

In perfect sync, Marcus adds perspective. “Brewing is a destination business, like a wine trail. People want to be able to stop at three, four, five places in a day. They get hotel rooms and they go out to eat.” He insists that connection sparks both creativity and opportunity, and Cushwa wants to be the epicenter of the local scene. Gesturing toward their former space across a U-shaped courtyard of loading docks toward Homaide Brewing, the newest brewery on the block, he says, “We actively brought them in.” The more, the merrier.

It’s a philosophy that plays out in the taproom, too. In addition to their own 200+ unique beer recipes that grace a rotating tap list of 14-16 beers on any given day, guests can find cold brew coffee from Hagerstown’s River Bottom Roasters and kombucha from Undone in Chambersburg, with locally made wines and spirits filling out the ranks. In a particularly symbiotic pairing, Rad Pies, an independently owned/operated restaurant, shares Cushwa Brewing’s cavernous space. Like peanut butter and jelly or macaroni and cheese, beer and pizza unite for the ultimate classic combo. 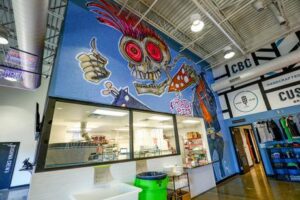 Rad Pies debuted to rave reviews in July 2020, thriving despite the pandemic. It also has an owner triad which includes Christopher Hubbard, Kenneth MacFawn, and Adam Hatfield. They are restaurant industry veterans whom foodies might recognize from the White Rabbit Gastropub in Frederick. They are also some of Cushwa’s earliest customers. Kenneth says plans to join up were already in play when COVID-19 restrictions first hit, but strong carryout beer sales indicated a ready market for a food and beverage duo. So, they pushed to open ahead of schedule.

Nontraditional pizza is the star here. Each inventive creation is baked at a sizzling 600° on a 600 pound stone slab that rotates around a Forza Forni oven for even cooking. Chef Adam explains that their signature crust is a proprietary blend of all-purpose and “00” flour that bridges the best of Neapolitan and New York style pizzas. “You get that crunch, that bite, on the outside and a soft chew on the inside.”

On a busy day, the diminutive kitchen cranks out about 300 12-inch pies, like the top-selling “Rickeroni.” That’s “Rick” as in riccotta and Roni for the pepperoni – two kinds. Here, the signature crust is layered with house tomato sauce and “big ass” pepperoni under a blend of cheeses, then dotted with rosettes of silky Sopraffina ricotta and juicy cupping pepperoni. It is finished with floral notes of shaved raw jalapeño, chili flakes, and a drizzle of Mike’s Hot Honey. Adam calls it a “roller coaster of flavor.” 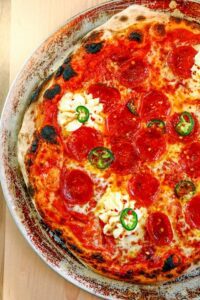 Customers can place their food order at a self-serve kiosk onsite, order online, or via the Toast TakeOut app for minimal contact. Rad Pies has sandwiches, soup, salad, and desserts to pair with playful specials on the evolving menu. There’s a meatball sub on house-baked bread that’s a popular lunch choice among the legion of surrounding industrial/warehouse workers, plus vegetarian/vegan and gluten free choices as well.

Beer orders, such as to-go crowlers of Berliner Weisse or blonde ale, must be placed and picked up separately through Cushwa Brewing Company.

Christopher points out their newly-debuted Detroit-style pizzas. These boast a square crust rimmed with crispy, browned cheese and toppings like bacon sausage gravy. “It’s labor-intensive, but has a lot of love put into it.” They make up to 10 per day, first come, first served.

Web and social media are the best ways to keep up with Cushwa Brewing and Rad Pies. Fans can track current offerings, get the scoop on events, or pick up merch and gift cards.

Closing out a year that shook the restaurant/hospitality industry to its core, this collective seems to have the right recipe. There’s even an expansion underway that will add 50 percent more square footage to the taproom, which can be used for private events.

While Scott knows the hard work he and the others put into making their businesses a success, he says it is particularly satisfying to see community members embrace the effort, too. “People bring family and friends from out of town and say, ‘this is our brewery.’ They take ownership of it. That’s pretty cool.”