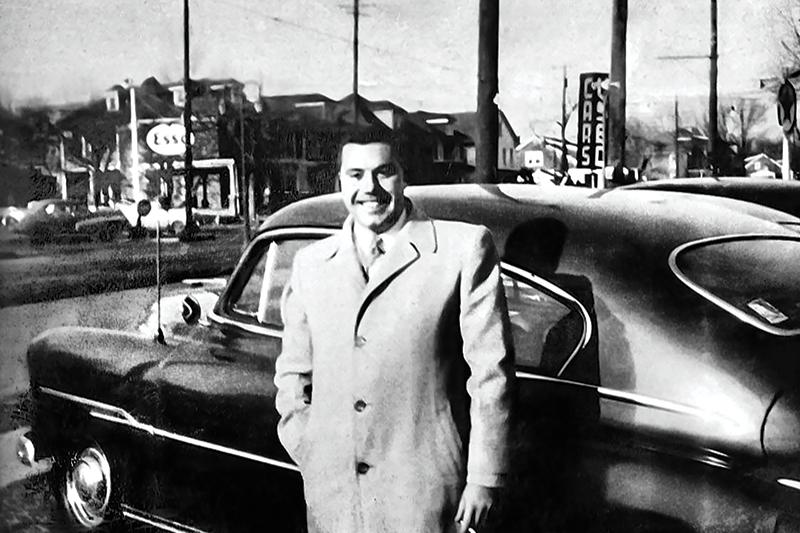 As a young man in the early 1940s, Carl Byrd worked odd jobs, one of which was delivering newspapers. Carl joined the U.S. Army during WWII. Carl’s Army experience lasted three years stateside, but the military life did not quite work with Carl’s wild side and he was eventually discharged. Carl spent some time working at Victor Products in Hagerstown and was employed at various jobs in Washington, DC, where his sister, Thelma, lived.

In the late 1940s or early 1950s, Carl’s brother, Ken, started Byrd’s Auto Exchange on the southeast corner of South Potomac Street and Wilson Boulevard and Carl worked for him for a time.  In the mid-1950s Carl started his own used car business, Carl Byrd’s Auto Sales. He opened the first location, right across from Ken’s long-time business, on the northeast corner of Wilson Boulevard and South Potomac Street where the CVS Pharmacy stands now. Later he moved the business to Virginia Avenue near the current-day overpass.

Charles Semler remembered dealing with Carl Byrd. “I bought my first car, a 1936 Ford three window coupe, from Carl (Trigger) Byrd on June 20, 1954. Trigger wanted $125 for the car, but my dad talked him down to $75. I hate to think what it would be worth today. I bought the car on Wednesday, got my tags and insurance on Saturday, June 23, 1954.

On Sunday June 24,1954, I got my first ticket for speeding. I was doing 43 mph, in the 30 mph speed limit zone through Tilghmanton. I was 16 and had my 6 year-old sister with me. We were going to our grandmother’s house at Taylors Landing. My sister was terrified when the trooper pulled me over. The fine was $16.45. I was on probation for a year. I still have the ticket and I am 83 years old now. I have never had any more speeding tickets. I’ve had a couple of warnings, but that is all.”