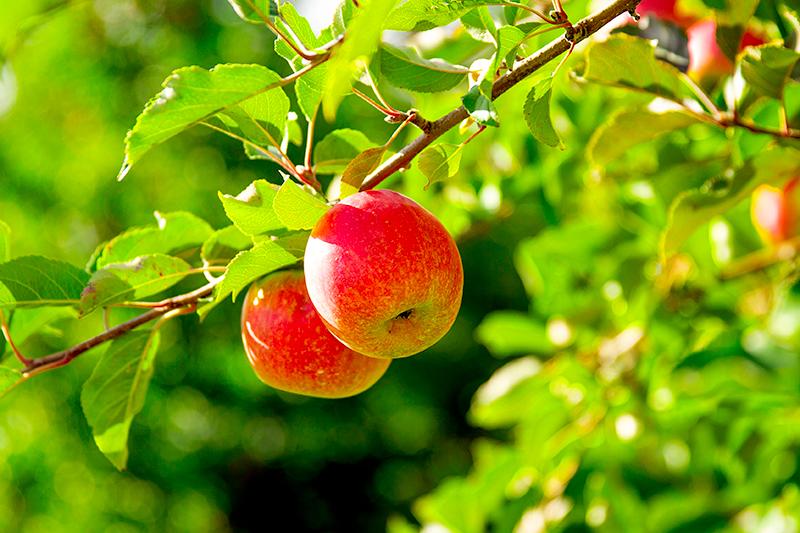 Fall in Maryland means visits to apple orchards and pumpkin patches. But getting those apple trees to produce just the right apple at the right time can be tricky. That’s where Chris Walsh, University of Maryland plant science professor, comes in.

Apples need about five months to grow from blossom to ripe fruit. But for Walsh and his fellow researchers at the University of Maryland’s research farm in Keedysville, the path to success has taken 30 years.

Walsh works in College Park, but makes weekly trips to the university’s Western Maryland Research and Education Center, or WMREC, a 491-acre research farm in Keedysville. There, among the cornfields, pastures, grapevines, pumpkin patches and hops plants, are thousands of apple trees in various stages of development.

Walsh, who did much of his work with graduate student Julia Harshman, starts his tour of the apple orchard at the roots. “This tree has fire blight,” he said, kneeling before a small apple tree tied to a trellis. Where the root emerges from the ground, the hard outer layer of the trunk is cracked. Amber liquid oozes out of the opening.

“The goo is bacterial ooze from disease,” he said. That disease is fire blight, which is deadly to apple trees.

Historically, Washington County and other parts of the central Appalachian region grew large quan-tities of apples. Orchards stretched from Pennsylvania through Maryland and West Virginia into Virginia, packing thousands of tons of Red Delicious and Golden Delicious apples into crates for the whole-sale market. 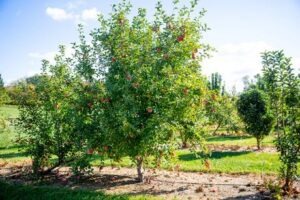 Those apples were resistant to fire blight. But tastes changed. Today, the Gala apple is the most harvested apple, having overtaken Red Delicious in apple production last year. The trend away from Red Delicious started in the 1980s. Changing growing techniques also led to trees infected with fire blight. The blight has nearly wiped out the Eastern pear industry, Walsh said.

So, in 1990, Walsh decided to see if he could breed an apple variety that would resist fire blight; tolerate the region’s hot, humid summers; offer a tart-sweet flavor and a crisp texture; ripen in October when people are visiting farms to pick pumpkins and walk corn mazes; and grow on a compact tree ideal for pick-your-own farms. It also needed to be compatible with the limestone soil that dominates much of Maryland’s apple-growing region.

Walsh knew it would be a long-term project. Fire blight has become a larger problem for the Eastern apple industry in the past three decades. Growers shifted from old-fashioned, taller apple trees that required ladders to shorter trees. Some of those trees are grown from rootstock, or roots that spread along a horizontal line and produce identical trees, growing upward in shoots.

Walsh wanted to develop a tree that grows from individual roots. That’s to prevent disease from infecting a whole row of trees. The Antietam Blush, known by its scientific name of CP101, is a blend of Cripps Pink (known popularly as Pink Lady) and Gala apples, with some McIntosh thrown in. But this 30-year breeding process is just beginning to come into its own.

It started back in 1990 when WMREC was willing to give Walsh the space he needed for his orchards, and his project took root. Over the years, Walsh and his assistants have planted thousands of trees. He pointed to the tree he calls the grandmother tree, about a football field away from the current orchard. It’s grown quite tall in its old age, and in early October a few apples still clung to its branches, but its best fruit producing days are over.

While many apple orchards today have dwarf trees, Walsh did not want Antietam Blush to be a dwarf tree. Instead, he focused on reproducing compact trees that tended to spread out, not up. Horizontal branches help a tree bear more fruit. Letting nature do some of the work, Walsh allowed pollen from Gala trees to fertilize a compact McIntosh variety called Wijack. The resulting trees were the start of his project.

Walsh continued to cross-pollinate trees using seeds from Cripps Pink, Fuji, Braeburn, and York apples. Starting with 500 seedlings, he said, “We took 30 of the best trees.” He planted these and encouraged the trees to continue to pollinate. “I let the birds and the bees do their mixing,” he said. As the trees grew, he planted more offspring, continuing to pair the Gala cross varieties with the compact McIntosh variety, all with the genes of Cripps Pink, Fuji, Braeburn, and York mixed in. 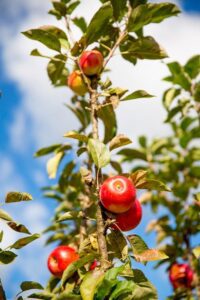 By 2000, the apple project was beginning to bear fruit. The resulting apples were a blend of sweet and tart. The short, compact trees didn’t need to be pruned, which Walsh knew would save growers money. The apples would be ready to pick in mid-October, peak pumpkin and hayride season, a time when visitors flock to farms for fall treats.

Known as the Maryland Apple Tree Architecture Project, Walsh began working on the second generation of trees in 2007. Harshman joined Walsh at that time, helping to winnow the trees down to those that had the strongest characteristics, the best fruit, the most disease-resistant, the right shape without pruning.

Harshman and Walsh continued the project for 10 years, growing trees that were more disease tolerant, bearing plenty of fruit on low hanging branches and developing a tart-sweet taste, on roots that thrive in limestone-rich soil. Harshman is now a plant scientist in California, but Walsh and assistant Kathy Hunt keep the project going.

Now in its third generation, there’s a patent for Antietam Blush. Walsh chose the name because of the farm’s proximity to Antietam National Battlefield, just a few miles away. The ruddy red apple has a hint of green with whitish lenticles dotting the skin. The firm, crisp flesh has a tart-sweet taste. It tolerates hot summers and is fire blight resistant. In early fall, warm days of 60 to 80 degrees followed by cool nights help bring out the red color and the sugar. By mid-October, the apple is ready for harvest.

Bob Black, who owns Thurmont’s Catoctin Orchard, has eight of the trees. He takes the apples to the Mid-Atlantic Fruit Convention in Hershey, Pa., each winter. “I bring bushels and say, ‘Take them along,’” he said. Growers, he added, are enthusiastic about the Maryland-bred apple because of its taste, its heat tolerance, and its Maryland connections.