Foster’s On The Point 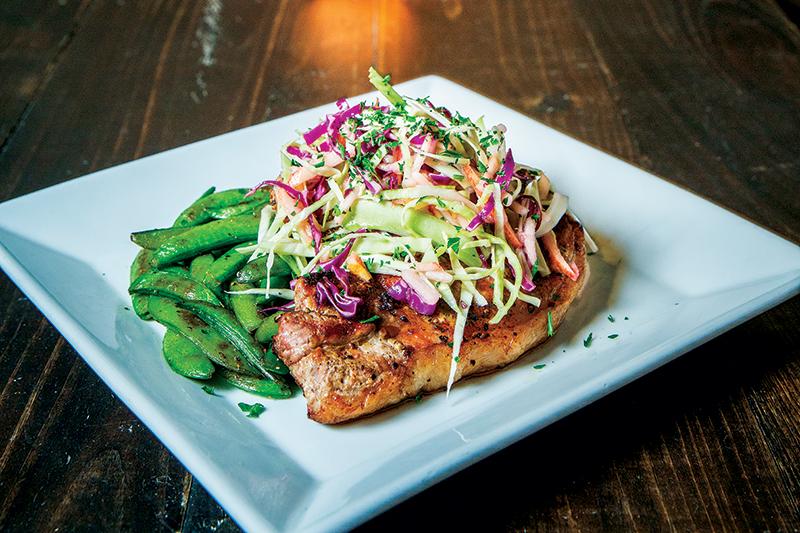 Staying afloat thanks to the loyalty of their employees and the overwhelming support of the local community.

By Jessica Swan and photos by Turner Photography Studio

It can be difficult to see any silver lining amidst the current pandemic, especially as a local business proprietor; but Mike and Kelli Foster have been fortunate to see another side of what can transpire in the middle of sudden upheaval: community support and employee loyalty.

As owners of Foster’s on the Point since March 2017, the husband and wife team had provided the Hagerstown area with a welcoming atmosphere, live music, a delicious twist on American fare and a variety of cocktails and brews.

In return, the local community played a significant role in keeping the Salem Avenue restaurant afloat during COVID-19. When state restrictions limited service to only “carryout” the evening of March 16, the timing was tough, as all preparations had been made for St. Patrick’s Day. The anticipated corned beef and cabbage, reuben nachos and Guinness stew, along with many drink specials were ready to go… and the restaurant business as they knew it came to a halt. “We had to put our heads together and decide what to do,” Kelli says.

She and Mike concluded that Foster’s would remain open and were rewarded with a steady carryout crowd. A few days later, when Gov. Hogan announced the ability to sell alcohol “to go,” Mike’s mind went to work. Foster’s is known for their pickle shots, and when one of the “regulars” suggested selling them in bulk, Foster’s 32oz. Mason Jar Cocktails were created. First it was just pickle shots, within a day or two, crushes, mules, rum punch and even bloody marys were part of the lineup. Simple jars, finished off with a Foster’s label and a piece of twine, literally changed everything. “It was a lifesaver that kept us afloat. It definitely got us through and I’d venture to say it helped many others get through as well,” Kelli says with a laugh. Foster’s sold over 1800 jars between late March and when they reopened June 16.

Inspired by patron loyalty, Mike came up with an idea of a giveaway. All customers who placed a carryout order would put their name in a daily drawing for a $25 gift card. “Every customer has so many other options to get takeout, a gift card would be a great ‘thank you’ for choosing Foster’s,” Mike says. “The plan was that restaurants were going to be closed for two weeks, we can certainly give away a gift card each one of those days.” As history shows, those two weeks turned into many weeks, but the raffle continued. Mike says that many customers would say if they won, please donate it to an essential worker. A couple police officers who frequent Foster’s did win, on separate occasions, and requested that the prize be given to medical staff that are on the front lines of the pandemic.

“We live in this crazy world of chaos, but there is still that kind spirit,” says Kelli. “COVID-19 has shown us there are still a lot of good people out there.”

In Foster’s case, many of those good people hold the title of employee. Unfortunately, Kelli and Mike had to lay off all but two employees when they were shut down. While they, and their daughter, shared front of the house duties, the Fosters give all the credit to their dedicated head chef, Austin Ott and their sous chef, Max Becraft. “The biggest part of getting through this whole thing was our guys in the kitchen. Those two guys right there were the heart of what kept us going, and we wouldn’t have been able to make it without them,” says Mike.  “Our whole business model changed—we were a quaint, little restaurant that turned into a ‘to go’ stand,” Kelli remembers.

On the surface, switching from in-house diners to carryout may not seem difficult, but serving a day’s worth of customers in a short 2 1/2 hour dinner rush proved a challenge. “Lunch specials were always a part of the menu and did yield decent carryout orders, but dinner time was crazy,” says Kelli. Operating hours were altered during the pandemic, closing at 7p.m. Many nights the kitchen was still cooking at 8. Austin and Max showed up every day, without fail, doing what they do best, nonstop. “I cannot praise them enough for sticking with it, and for their work ethic,” Kelli said.

When the Fosters saw that West Virginia was opening for outdoor dining in early May, they knew they needed to “get on the ball.” Knowing the patio that had been in the “big plan” since day one couldn’t come together financially nor quickly, they came up with Plan B.

Mike began sketching and making calls to the liquor board, building commissioners and the fire marshal. All three offices came out, took a look at the plans and helped bring it to fruition in record time. The Fosters did not want to just throw tables and chairs up outside; they wanted to make it look nice, even if temporary. They began constructing an outdoor dining and bar space on May 16. Friends, family, and even customers would stop by to help. “They wanted us to be able to open,” Mike says. With daily work and eager help, it all came together in four short weeks and Foster’s reopened with outdoor seating June 16.

Along with gaining a new customer base, the patio helped bring back live music, which Foster’s has always supported. At first, Kelli was leery of possible noise issues, as Foster’s is located in a residential area; but the opposite came to light. Mike had gotten messages from a few of the neighbors who actually enjoyed listening to both the acoustic Friday nights and full band Sunday afternoons from their porch.

The Fosters are also grateful that they were chosen as recipients of the Rise Up Business Stabilization Grant through the Washington County Board of County Commissioners. Local businesses who requested consideration for the grant were asked to submit financial data and show how COVID-19 had affected their enterprise. Specifically, the Fosters asked for operating expenses for utilities and assistance for covering salaries, for an affected period of time. The money received from the grant, combined with neither Mike nor Kelli taking a salary during this time, was imperative in freeing up funds to complete the patio project. Due to the added patio space, the Fosters were able to bring back their entire staff, plus hire 10 more employees to staff the additional space and influx of business. “Another silver lining to COVID-19, we would have never been outside this year; it taught us what works, what doesn’t, and how to tackle the project better,” says Kelli. The original outdoor expansion plans are still in the works.

Even after an exhausting and stressful past few months, the Fosters have no plans to take a break. March 2020 was to launch a project in the upstairs of the restaurant, “an upscale atmosphere offering finer spirits,” which is now in progress after a seven-month delay, according to Kelli. Mike describes the future parlor as serving only cocktails and small plates, with a focus on good conversation and great cocktails.

“Throughout it all, we have just had to adapt and overcome,” says Mike, while Kelli notes “failure is not an option” because of the “all in” financial investment that motivates them to push forward during trying times.

With a large group of “second to none” loyal customers and employees that are like family, Foster’s will no doubt continue to not just survive, but thrive, no matter what the future has in store.