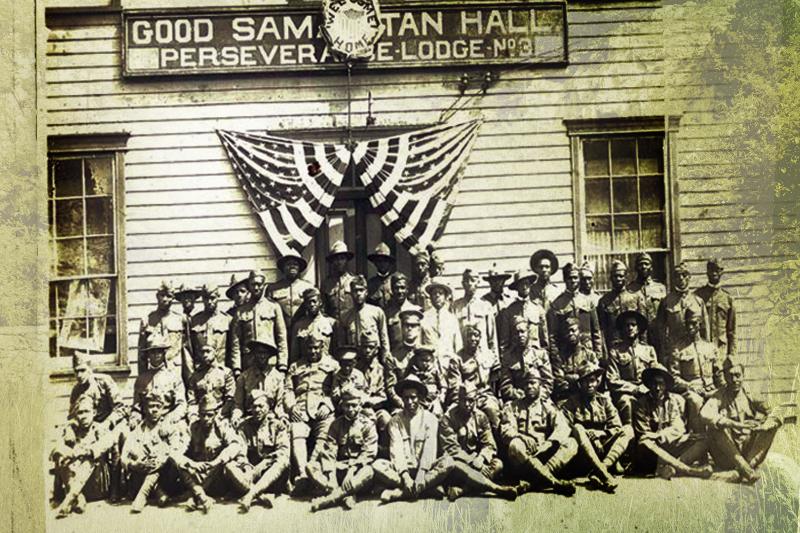 Story and photos by Lisa Gregory

They lived rich and full lives. They married and raised children. They fought to preserve the Union during the Civil War and then to defend it against foreign powers during World War 1. They loved and laughed and cried. And when the time came, they found their final resting place at the Halfway African American Cemetery, or as it was known then, the Halfway Colored Cemetery.

Then, those buried there were lost to time and development, and the undergrowth of nature taking over their graves and tombstones in a small area that still remains.

Led by Elizabeth Paul, whose property adjoins it, there is an effort to restore and preserve the half-acre of what was once a seven-acre cemetery with over 400 graves – marked and unmarked.

“I wanted to protect it,” says Paul of the lot which is nestled among the houses in her neighborhood.

Paul, who has lived in the neighborhood since 2002, grew increasingly concerned through the years about the aban-doned and neglected lot. “There was stuff dumped there, beer cans and trash,” she says.  “And yards were encroaching on it.” 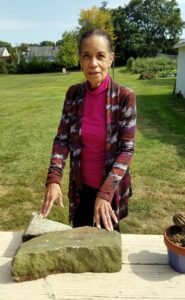 At that time, she did not realize it was a cemetery. However, there were clues. Random headstones are scattered about the neighborhood.

Paul began searching through tax records and visiting the zoning office to learn more about the lot. And once she realized what it was, she became determined to do something about it. She was on a quest. But she was not alone.

“I was interested in researching African Americans in Episcopal churches before the Civil War in Washington County,” says Emilie Amt, a professor at Hood College. “Someone told me there was an African American cemetery in Halfway and it was behind the Jewish cemetery.”

Amt attempted to find it. “I drove out to Halfway seven or eight years ago, and I looked around but could find nothing,” says Amt of the small lot which is inaccessible and out of sight from the main road. “I thought, well that cemetery was lost.”

An acquaintance familiar with Amt’s research suggested that Paul contact Amt in her efforts to learn more about the cemetery. “I got this email from her, and I was gobsmacked,” says Amt.

Yes, there was a cemetery and it was in Paul’s back yard, so to speak.

The two formed a team and a restoration and preservation mission was born.  For the most part Paul works on organizing the specifics of the cleanup efforts. Amt researches the people who are buried there.

“The Halfway African American Cemetery helps tell the story of Hagerstown’s free black population before the Civil War, through Reconstruction and well into the 20th century,” says Amt.

So far Amt has discovered that at least seven Civil War veterans are buried at the cemetery, as well as a World War I veteran. Irvin Sullivan fought in the Great War and was sent to France where he served in the Bonhomme Sector of the Meuse-Argonne front. Buried with a veteran’s headstone, Sullivan’s tomb-stone is one of the few in the partial cemetery that is still intact.

Sadly, the area is full of broken tombstones which can sometimes be confused for rubble. Amt became especially intrigued when a volunteer on cleanup day came upon a piece of broken stone with a few lines of incomplete verse.

“The whole verse is from a hymn of the time,” says Amt. “It reads, ‘I long to reach the shining shore, and wear the victor’s crown, when conflicts, toils, and sorrows o’er, to lay my armor down.’” 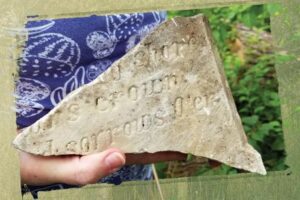 Among those also buried there and identified by Amt are Hercules Turner and Bernard Nelson Simms. Turner was a slave who bought his own freedom and then that of his first wife, and when she passed away, he then bought the freedom of his second wife. Simms, who was buried there in 1903, was a Pullman car porter for 15 years. According to Amt, Pullman porters held a prestigious position in the African American community and were important in black history, forming the first all-black union and helping build the black middle class.

On March 7, the work began to restore the cemetery. Those participating that day included members of the Boy and Girl Scouts, members of the Antietam  and Conococheague Chapter of the Daughters of the American Revolution, Hood College historians and archaeologists, and Antietam Tree, which donated their services in beginning the process to clear fallen trees.

Then COVID-19 hit. And the cleanup efforts were put on hold. “We are hoping to get back to the cleanup and restoration efforts this winter,” says Paul. “Obviously, no big group but small groups of 10 probably.” Adding, “Stage one is cleanup. stage two is archaeology. And stage three is restoration and eventually making it into a memorial park-like setting.”

Despite the obstacle of the pandemic, work continues in other ways. The two women have created a Facebook page, Friends of Halfway MD African American Cemetery, keeping the community updated on developments regarding not only the cleanup but what Amt continues to learn through her research.  Thus far, she has found the names of nearly 100 people buried there, with the earliest in 1844 and the most recent in 1932. However, she thinks the cemetery may be older than 1844 and may include both free African Americans and slaves.

According to Amt, in the 1950s most of the cemetery was sold off to a developer and houses were built on the land. That scenario is not unique to the Halfway cemetery, says Amt.

Now those cemeteries and the lives of the people buried there are being rediscovered. And according to Reggie Turner, a commissioner with the Maryland Commission on African American History and Culture, the Halfway cemetery, much like the recently discovered cabin on Jonathan Street in Hagerstown and its significance to black history, is a prime example of that.

“I think these efforts are very important,” he says. “Around the country for many years we’ve seen where African American cemeteries were disregarded. And this particular cemetery is very influential to our community because it is tied to Ebenezer AME Church. The history of that church is rich. The congregants of that church were very influential in our community and large contributors to building the community.”

In fact, it was members of the Independent Order of the Good Samaritans and Daughters of Samaria, a black fraternal order in Hagerstown, who were mostly members of the Ebenezer AME Church, also known as Bethel, that purchased the cemetery in 1897. Thus, officially incorporating it. “The church cemetery had become full,” says Amt.

At the time that the cemetery was purchased, Perry Moxley was one of those Good Samaritan members as well as a trustee of Ebenezer and a member of the locally renown Moxley Band. As such, he is an important part of the cemetery and its history. The band, which also included Perry’s two brothers, enlisted together in 1863 to form the First Brigade Band of the United States Colored Troops. The Moxley Band was a staple of the Hagerstown and Washington County area for years.

On cleanup day, “His was the very first gravestone we found,” says Amt, smiling.

It was significant moment not just for Amt and Paul, but for Carolyn Brooks, as well, who is a direct descendant of Perry Moxley. Her great-grandfather Robert was Perry’s brother. Even as a little girl, she was aware of her Moxley musical heritage.

“I knew about the band because there were instruments always around,” says Brooks who has a Moxley Band drum from 1910 and horns that the band used during the Civil War. “I grew up knowing that there were a lot of musicians in my family. There was always music and discussions about music.”

Brooks, also a proud descendant of Nathan Williams who owned and lived at historic Fort Frederick for 57 years after purchasing it in 1857, is delighted with the Halfway find of both the cemetery and her ancestors buried there.

“I appreciate so much what the historians are doing right now,” she says. “Because they are putting together the pieces of the puzzle of my history. History that I couldn’t find on my own because African American history is not easily located. Now I can share that history with my daughter. It gives me a sense of pride.”

And it would be meaningful to her long-lost family members as well, she says.

“I think they would appreciate the final recog-nition,” says Brooks. “And the fact it’s not going to be something that is just going to be plowed over. Like some cemeteries have been. It gives them a future as well as a connection to the past.”