A Wisconsin Yankee in Gray 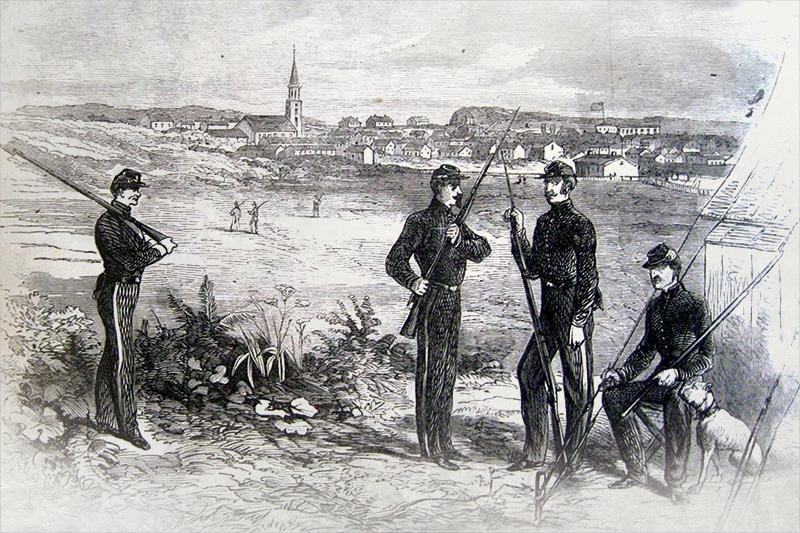 Over the course of those four years, about 750,000 Americans lost their lives. During the great battles thousands fell in a single day. But did you know that one of the very first battlefield fatalities of that terrible ordeal passed away in Hagerstown? And that he was a Union soldier? Yet, he wore a gray uniform?

But it’s true. Hagerstown was a strategically important location for Union plans to advance into Virginia. Located in the middle of the Cumberland Valley, U.S. Route 11 – the “Valley Turnpike” – was a major artery for movement into Virginia. Also, Hagerstown was the southern terminus of the Cumberland Valley Railroad, which connected the city to Harrisburg, Pa. Throughout the war, the Hub City was an important quartermaster depot and hospital site for Union forces operating in the Shenandoah Valley.

After the nearly bloodless bombardment of Fort Sumter, in April 1861, President Lincoln called up 75,000 volunteers to “suppress the rebellion.” Virginia – which previously had shown little interest in leaving the Union – seceded rather than participate in an invasion of another state. This placed Washington County on an unofficial national border drawn down the Virginia bank of the Potomac River.

The South had no national army, and the standing army of the United States was very small; only about 16,000 men. Militia (National Guard) units were loosely trained and were often led by local politicians. The eye appeal of uniforms designed on the latest military fashions was used to recruit members. As such, the Civil War started off very much as a “come as you are” affair. Uniformity existed only within local companies; and sometimes, not even then. When volunteers stepped forward, the states clothed their enrollees with whatever they had access to on short notice. This chaotic situation resulted in numerous “friendly fire” incidents at the first major battle of the war at Manassas (“Bull Run”). As the war progressed, the North settled on the traditional U.S. Army blue uniform color, while the South selected less expensive and easier to produce gray cloth.

The response to President Lincoln’s call was swift. Among the first regiments to take the field was the 1st Wisconsin Infantry Regiment. It mustered in for 90 days’ service at Milwaukee on April 27 – less than two weeks after the guns at Sumter fell silent. Company B, which was known as the “Milwaukee Union Rifles,” reported for duty wearing Wisconsin militia regulation gray uniforms. Among the “non-coms” of Company B was 18-year-old Sgt. Warren Merrick Graham. When not performing his militia duties, he was a business reporter and typesetter for the Milwaukee Evening Wisconsin. The regiment included several newspapermen among its ranks.

The regiment left for Harrisburg on June 9. When the U.S. arsenal and armory at Harpers Ferry was captured by Virginia militia under Col. Thomas Jackson (later the famous “Stonewall”), Lincoln’s War Department assembled an opposing force at Hagerstown. Aging 70-year-old Maj. Gen. Robert Patterson was ordered to take command. He established his headquarters in the Hagerstown Female Seminary – a private school located on East Antietam Street. This site was later occupied by the Washington County Hospital until 2010. 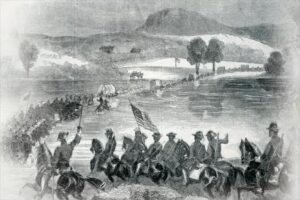 The soldiers from the “Badger State” arrived in Hagerstown on June 16 and marched in review for Patterson and Maryland Governor Thomas Hicks. The men were assigned to a brigade commanded by Col. John Abercrombie; Patterson’s nearly as elderly son-in-law. The Wisconsinites established a camp along Frederick Street, between the city and Funkstown. About this time, the Confederates at Harpers Ferry moved to the Winchester and Martinsburg area.

During their brief time in Hagerstown, Graham and other newsmen of the regiment decided to publish a four-page regimental newspaper they called the Camp Record. The first issue was published on June 27. Two days later, Patterson received word that the Confederates were moving down the valley toward Williamsport.

To this point, the “war” had been nearly bloodless.  Throughout April, May and June, riots in Baltimore and St. Louis, and several small skirmishes around Virginia resulted in fewer than three dozen soldiers killed or mortally wounded in action on both sides.

Patterson’s force, including the gray-clad Wisconsinites crossed the Potomac at Williamsport into “enemy territory” at 3 a.m. on July 2. Abercrombie’s men marched five miles into Virginia, encountering token resistance along the way. But they encountered a substantial force of rebels along US 11, in the area between today’s Hammond’s Mill Road and Nipeville Road. The Wisconsin troops were at the head of the column, and the men of Company B fanned out in front as “skirmishers.”

Like prior skirmishes, the casualties at the “Battle of Falling Waters” were light. Private Henry Kyd Douglas of Sharpsburg, who participated in the battle on the Confederate side, wrote later “It was only a little ‘affair at Falling Waters,’ as General Johnston called it, and few were hurt. To me it was of memorable importance; for there for the first time I heard the whiz of a musket ball and the shriek of a cannon shot. … Nothing came of it, but the war had made a beginning.” Douglas went on to compile an amazing service record during the war, and was an attorney, judge, and National Guard officer in Hagerstown for three decades after the war. The “little affair” passed into history known as “the Battle of Falling Waters,” or the “Battle of Hoke’s Run” or “the Battle of Hainesville” depending on which officer’s report or newspaper article you read.

Five men were killed in action between the two sides that day. Among these was Pvt. George Drake, the first Wisconsinite to die in the war. Five “badgers” were wounded – most were minor in nature. However, Graham received three wounds. Struck by two bullets, one entered his left leg below the knee, while the other passed through his lower left breast and lodged in his arm.

After advancing to Martinsburg, Patterson’s little army returned to Maryland. Drake was buried in Riverview Cemetery in Williamsport. He was moved to Antietam National Cemetery after the war. Graham was taken to a stone house along the turnpike and army doctors cared for him there for several days. Around July 10, Graham was loaded in an omnibus for an agonizing trip to Hagerstown where he was admitted to the army hospital. The hospital operated from tents at two locations: behind the courthouse on South Jonathan Street (Summit Avenue) and on the grounds of the Hagerstown Academy on South Prospect Street.

When word reached Milwaukee, Warren’s parents traveled to Hagerstown to oversee their son’s care. He suffered with his wounds throughout the hot summer while his comrades continued to protect Union interests along the Potomac. But the 90-day enlistments of the first volunteers were drawing to a close. The bloodletting at Manassas caused their little battle at Falling Waters to fade quickly into the background as America came to the realization that the war would be neither short, nor bloodless.

On Aug. 14, the first responders – including the 1st Wisconsin – began returning home, to be replaced with fresh regiments. The army hospital at Hagerstown was broken up. It sheltered about 50 sick and wounded soldiers. Most of the patients were sent in ambulances to a new facility in Frederick. Graham and a few others too precarious to move were taken in by local residents and cared for by local doctors.

As his friends boarded trains to return to Milwaukee, Graham was moved to the home of Attilla McIlhenny and her widowed sister Elizabeth McIlhenny Griffith on East Washington Street. The sisters lived in one side of a duplex home on the north side of the street, two doors east of the Hagerstown Day School. The home no longer stands. With the aid of the sergeant’s parents, care was provided by doctors J.C. Dorsey and Frederick Dorsey (his son).

But all attempts to treat Graham were in vain, and he passed away in the East Washington Street home on Aug. 26 – 54 days after Falling Waters. He was three weeks shy of his 19th birthday.

The bereaved parents returned with their son to Milwaukee. After a procession in Chicago led by newspapermen escorting the family when they changed trains, the Grahams arrived home on the 29th. The train was met in Milwaukee by his comrades in the 1st Regiment. They provided a military escort to the Graham home. The next day, the first public military funeral in Wisconsin history was held for Graham. Organized by the Chamber of Commerce, the procession of military, newspapermen, fire companies, and citizens escorted the remains from his home to services at the First Presbyterian Church and then to Forest Home Cemetery for interment. According to news accounts, thousands turned out for the ceremony.

For many years, the location of Graham’s passing in the city of Hagerstown, Maryland has been engraved in stone over his Milwaukee grave. His was the first. With the nearly constant presence of military medical facilities in Hagerstown over the next four years, it would not be the last.

Graham’s gray uniform is held in the collection of the Milwaukee Public Museum, and can be viewed there. For more information visit their website at www.mpm.edu and search “Graham.”