She Acted… With a Horse, Of Course… 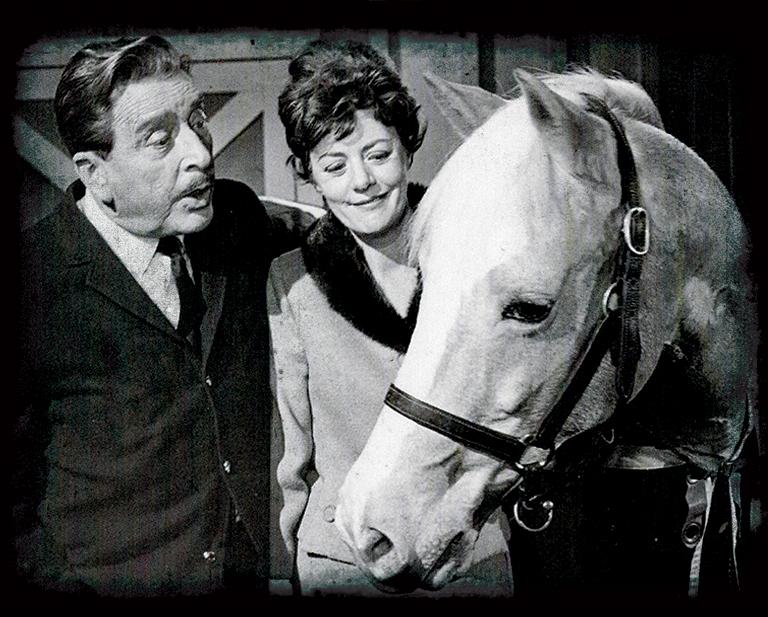 WARNING: You are about to experience a lot of name dropping. For many, this will be a walk down Memory Lane. For those born, say, after 1980 – well… get out your favorite internet search engine and prepare for a lesson in radio, theater, movie, and television history!

While there are Hagerstown natives who made national careers in entertainment, none had as long and varied a career as Florence MacMichael.

Florence was born in Hagerstown in 1919, the third child of Roy A. and Mary Adele Wahl MacMichael. Roy was a music teacher, the music director for St. John’s Episcopal Church, and organ performer for the Moller Organ Company. Her sister Jean (Hassett) and brother Roy Jr. were life-long Hagers-tonians. But Florence had different plans.

Florence cut her acting chops with the Hagerstown High School theater club and performed in several Potomac Playmakers productions. After high school she headed for New York, graduating from the American Academy of Dramatic Arts in 1940, one year ahead of Kirk Douglas. In January, she was mentioned in Billboard magazine for her performance in the AADA class production of Eugene O’Neill’s drama “Anna Christie,” in which she played the title role.

Then it was back to Maryland, where she auditioned for Baltimore playwright Francis Swann’s new comedy, “Out of the Frying Pan.” It was to be presented at the Hilltop Theater in Ellicott City. A 1940’s version of “Friends,” six young starving actors – three men and three women – rent an apartment “on the sly” above a Broadway producer’s home to share the rent and catch the producer’s attention. Florence landed the role of main antagonist Muriel Foster, a friend of one of the actresses. Naive, nitwitty and suspicious, Muriel disapproves and threatens to expose the scheme to her friend’s father. The play was a local hit and Florence’s comedy skills stole the show. “Frying Pan” moved to Baltimore in the fall, market testing the show for Broadway. Florence was hired for the Baltimore run, which also starred (in her professional debut) 18-year old Barbara Bel Geddes. You might know her best as Miss Ellie Ewing from the 1980s CBS prime-time soap opera “Dallas.”

“Frying Pan” opened on Broadway at the Windsor Theater on Feb. 11, 1941. It ran for 104 performances. Florence played Muriel in the Broadway production too. Her photo even graced the cover of the playbill. She drew a lot of attention with her offbeat perfor-mance of Muriel, which included a squeaky comedic voice she would employ in future comedy roles. The play was even featured in the March 17, 1941 issue of Life magazine and Florence was featured prominently. Billboard praised her and cast mate Sellwyn Myers as “possibilities… for films,” and lauded her as “an outstanding young comedienne.” She and the play attracted nationwide press attention. Ellicott City to Broadway success in nine months. Not bad!

Her first taste of Hollywood came when Paramount Pictures obtained the rights to make “Frying Pan.” The great reviews she compiled as Muriel paid off and she was contracted to reprise the role for the movie. In the fall of 1941, she headed to Hollywood. Renamed “Young and Willing,” the movie starred future A-listers William Holden and Susan Hayward as well as Eddie Bracken. Florence was the only actor to appear in “Frying Pan’s” Ellicott City, Baltimore, and Broadway casts as well as the movie. You might remember Bracken from his role as theme park magnate Roy Walley in “National Lampoon’s Vacation.”

1943 was a busy year. “Young and Willing” was released in May. Florence appeared in a lead role on Broadway and in the Bronx in two runs of “Proof Thro’ the Night” – a drama about nurses in Bataan during the Japanese invasion in 1941. The 11-member all-female cast included a 22-year-old actress in her first Broadway role, Carol Channing. In August and September she appeared in Boston and on Broadway in the comedy “The Snark was a Boojum” with a 15-year-old Dick Van Patten.

On Feb. 7, 1944, Florence married her “Frying Pan” cast mate Sellwyn Myers on Long Island. Stationed in North Carolina, Sellwyn was serving in the Army Air Corps. The Myerses were blessed with two children: Anne in 1949 and Patrick in 1953. Soon thereafter, Florence became part of Broadway and civil rights history.

In late 1944 she landed the role of Flossie in the Broadway run of the Leonard Bernstein musical On the Town,” a story of three sailors on leave in New York City. The producers cast ballet dancer Sono Osato in the female lead of Ivy Smith. Ivy was a local beauty queen (“Miss Turnstiles – The All-American Girl”) and object of the affections of one of the sailors. Osato was a biracial Japanese American whose father was placed under house arrest due to the war effort. Casting her in this role was intended to make a statement and audiences warmly accepted her. Also, the ensemble was the first racially integrated Broadway show. The producers cast six African-American actors and actresses who performed equal, non-stereotypical roles, dancing, singing, and acting as equals with their white cast mates. During this time Florence was experiencing all the sights and sounds of Manhattan as America celebrated the allied victory in World War II.

In the late 1940s, radio was king, and Florence frequently found work in several national radio shows headlined by Jimmy Edmondson, Bernie West, “Slapsie” Maxie Rosenbloom, and Phil Silvers. But most notably, Florence was a regular cast member on “The Martin and Lewis Show,” starring legends Dean Martin and Jerry Lewis. The show debuted on April 3, 1949 with guest star Lucille Ball. It ran through 1953. Recordings can be found on the internet.

The 1950s involved caring for her young family and working in a variety of projects. In 1956, Florence relieved Peggy Cass in the role of Agnes Gooch in the Broadway production of “Auntie Mame.” Florence had big shoes to fill following Cass, who earned a Tony Award in the role. From late 1956 through 1958 she played Agnes – Mame’s frumpy secretary who Mame turns into a “femme fatale” for an evening with disastrous consequences. Sellwyn landed the role of Sam in the cast as well.

When the Broadway run ended in mid-1958, she reprised her role in the west coast touring company of “Auntie Mame,” with Eve Arden in the title role. A Golden Age A-lister, most of us remember Arden more for her role as Principal McGee in the 1978 John Travolta-Olivia Newton-John musical “Grease.” “Mame” kept her busy through 1959, and when it closed in November, Florence sent a copy of the event program to her mom in Hagerstown, personalized by Arden and all members of the cast.

In late 1958, while “Auntie Mame” was on a break, Florence again worked with her “Young and Willing” co-star Susan Hayward in a supporting role as Mrs. Gibbs in the movie “Woman Obsessed.” Set in the Canadian northwest, the story focused Hayward’s character navigating conflict between her new husband and her young son.

The 1960s found Florence again switching gears, diving into tele-vision. She and Sellwyn settled in a very middle class bungalow home in the Sierra Madre area of Pasadena, Calif. Working regularly at the Pasadena Playhouse as both actor and director, she co-founded an amateur theater troupe, “the Studio Players of the Sierra Madre,” in 1960.

They produced shows in Sierra Madre’s Masonic lodge. And she taught theater for years. She produced and directed a short film, “The Ring,” in 1966, in which she cast Patrick and many of her friends from the local Sierra Madre arts community.

Some other shows she appeared in may be quite familiar to you, such as “The Donna Reed Show,” “Schlitz Playhouse,” “Gunsmoke,” “The Tall Man,” “The Twilight Zone,” “Bonanza,” “General Electric Theater,” “Dennis the Menace,” “Our Man Higgins,” “The Alfred Hitchcock Hour,” and “The Lucy Show,” among others. A 1970 episode of the police series “Dan August,” in which she appeared with Burt Reynolds, appears to be her last television role.

But by far, her most noticeable role came in 1963 through 1965 when she was brought on as a replacement in season four of the situation comedy “Mister Ed,” the show about the talking horse, of course! Florence and Leon Ames were brought into the show to portray Gordon and Winnie Kirkwood – Wilbur’s and Ed’s neighbors. Her stint as Winnie ran for 40 episodes over two seasons. With a regular gig and the studio 45 minutes across town, Florence gave in and learned to do what others take for granted – drive a car!

Moving toward retire-ment, her career was capped with roles in two movies. In 1968, she appeared in a small role as Dean Jones’ secretary in the Disney film The Horse in the Gray Flannel Suit. In 1972, she appeared in “Welcome Home, Soldier Boys,” one of the first anti-Vietnam War films. In “Soldier Boys,” she played the mother of a returning veteran played by Joe Don Baker (soon to gain fame as Sheriff Buford Pusser in “Walking Tall”).

But what about the person? Who was Florence? Not everything is peachy in Hollywood. Florence and Sellwyn parted ways in 1970. Soon thereafter, she remarried James L. McCoy, who was active in the local Pasadena arts community. They lived happily in Cambria, Calif., until her passing in 1999. Both of her children battled health issues as adults. And in 1997, the family suffered a calamity when her 16-year-old granddaughter Amanda was struck and killed by an automobile in San Bernardino.

“What can I say about Aunt Florence?” asked her nephew, Keith MacMichael of Mount Jackson, Va., when he was approached for comment. “She was warm, witty, soulful, and loving. Did I say she was funny? She had the greatest sense of humor, confidence in her abilities, and a wonderful humility. She came back to Hagerstown periodically to visit family and old friends, so she never forgot her roots. She told me once that she didn’t seek fame or wealth and her only professional desire was the respect of her peers. I think her desire was fulfilled.”

It is not often such a grand life in the limelight can be summed up so succinctly, but in Florence’s case, the marker placed above her head after her passing says it all. Florence MacMichael Myers McCoy – Actress, Director and Teacher.

(Thank you to Keith MacMichael for his help with this article.)