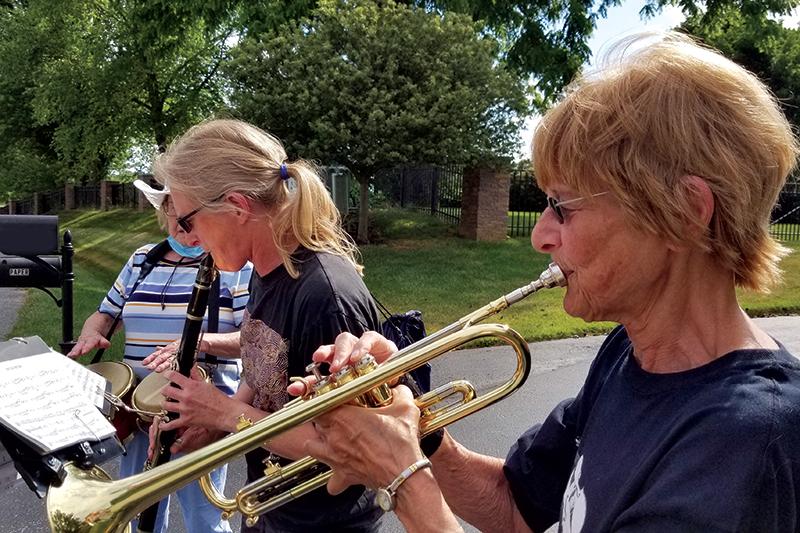 They come with saxophones, trombones, and flutes. They come with bongos, tambourines, and maracas. There is a float every now and then, and even a juggler from time to time.  And everywhere they go, the quarantine parade band of Black Rock Estates spreads happiness throughout their neighborhood and even beyond it.

“Music brings joy,” says Anita Thomas, who helps coordinate the parade band and is described by members as the unofficial band director.

That joy was much needed as people adjusted to the idea of being quarantined this past spring, including those living in Black Rock Estates. Residents like Anila Haq, for example, a self-described people person, were struggling. 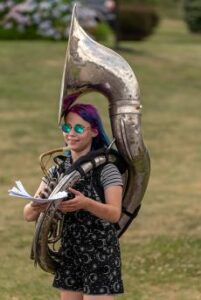 “When this pandemic happened, I was feeling down like everyone else,” she says. “It was a big change for all of us.”

So she turned to social media and, more specifically, the Black Rock Estates private Facebook group to reach out to others.  She offered to help individuals, especially the elderly in the neighborhood, by going out and getting their groceries if they were hesitant to do so. And she even offered to help celebrate birthdays. “I said, I will come and sing Happy Birthday to you at your door,’” she says. “‘Just to cheer you up.’”

That post, in particular, caught the eye of neighbor Anita. A professional jazz musician who also teaches music, Anita was feeling the loss from the quarantine as well. No gigs. No lessons.  So Anita responded to Anila’s post by offering to “come and play Happy Birthday outside your house on my sax from six feet or more away!”

“The ball started rolling after that,” says Anita.

From those initial two, “it became three, four, and so on and so on,” says Anila. The birthday serenade evolved into a full-out parade band mindful of social distancing in a matter of weeks. As neighbors came outside to watch the parade from their lawns or driveways, “We would call out,” says Anita, “Join us! Join us!” 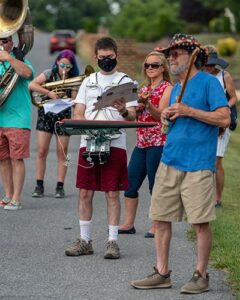 As the band parade grew and the word got out, something special began to happen. Neighbors got to know neighbors. And residents began to look forward to the weekly parade as they came out to watch from their lawns or driveways.  “We would just walk through the neighborhood, play music, and cheer people up,” says Anita.

“This has definitely, for me, brought our neighborhood together,” says Christine Ohl-Gigliotti, who plays her saxophone in the parade band. “Especially since that’s been ripped away from us working from home and not having a work community; it’s given us a new kind of community. And the beauty is that we all live together.”

Christine has not only discovered a new community but has rediscovered her love for playing the saxophone as well.  “I played the saxophone in high school and college and a little bit as an adult,” she says. “I missed it.”

She and her husband Tony Gigliotti, who not only juggles but plays the keytar in the parade band, have found a new creative outlet. “I was staying at my house and working from home like everyone else and not doing much besides grocery shopping every couple of weeks,” says Christine. “I thought this would be a fun thing to do. It was nice to come together and just forget about all the uncertainty and craziness around us and all the challenges and just play music together.”

Yet, despite the instruments and those willing to play them, something was still missing.

“What is a parade without a float?” asked Kurt Cushwa.  That’s where Kurt stepped in and offered a homemade

T. Rex skeleton which is attached to a recumbent trike that Kurt pedals through the neighborhood. The nine-foot skeleton was built by Kurt and his granddaughter initially as a float contestant in the Mummers Halloween Parade. And, in fact, the T. Rex came in first place. 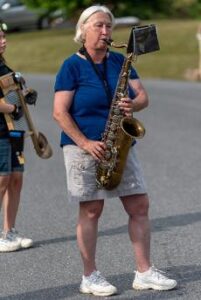 The float is not a consistent part of the parade because of its size and the process involved in assembling it each time.  “It’s a lot of work,” says Kurt.

But when the T. Rex does make an appearance it is a special event for the neighborhood, delighting children and adults alike.  And the Cushwas are glad for it. “We like to have fun,” says Kurt’s wife Peggy.

By summer, the parade was a familiar and popular sight in the neighborhood on Fridays or Saturday evenings weather permitting.  “We would post on the neighborhood site or people would just hear us coming,” say Anita.

The parade band includes young and old as well as those of different ethnicities and from different countries, all coming together for their community. 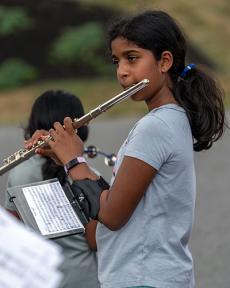 This fact was not lost on Anila, who is originally from Pakistan. On July 4 Anila’s family was celebrating daughter Maheen’s wedding.  And the parade band, which held a Fourth of July parade that day, had a special treat for them. They had learned a special Hindi wedding song for the wedding celebration.

“We have been in America for 33 years,” says Anila, who does not play an instrument in the band but refers to herself as their cheerleader and often live streams the parade. “I’ve never seen this before. All people of color and all nations and all our neighbors standing together right in front of my house on the Fourth of July and they are playing a song for my daughter. For her wedding. It brought our neighbors together and made my daughter’s day special.”

Brenda Manspeaker’s father is a resi-dent there in the assisted living quarters. He was both delighted and surprised by the parade band. “He thought it was great,” she says.

For Brenda, visiting her 85-year-old father during the pandemic has not been easy since they can no longer interact face to face. When she plans to visit him, she calls ahead and lets him know she is coming and to be ready. “When I get there, I call him again, standing right outside his window,” she says. “That’s how we visit.”

The parade band’s performance offered a happy distraction. “I was completely touched by it,” she says. “The idea that they wanted to give something of them-selves to make someone else happy and bring some sunshine into what has other-wise been a cloudy time, was wonderful.”

The parade band also played for the memory care unit at Somerford. “They just had a ball,” says Brenda of the resi-dents there.  “One lady knew all the words to the songs. They played a lot of patriotic tunes and older tunes.  She sang along. You could tell she was singing along because she mouthed the words very distinctly. Her arms were waving. Like she was conducting the band. It was so cute.”

The performance had a powerful impact on the parade band members as well. “I’d go there every day if we could,  just knowing how much joy it brought to them,” says Christine.

As Christine’s words suggest, the parade band has become something special to those who belong to it and are touched by it.  Anila is not surprised by this.

And a little music. 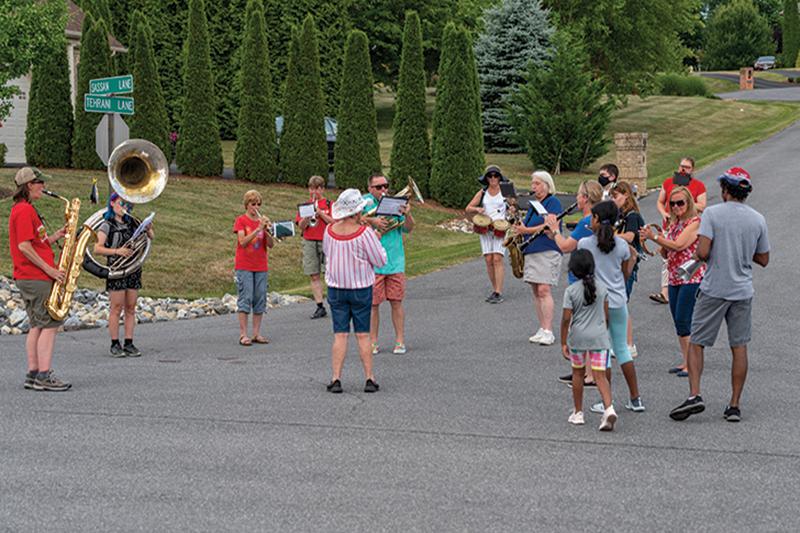