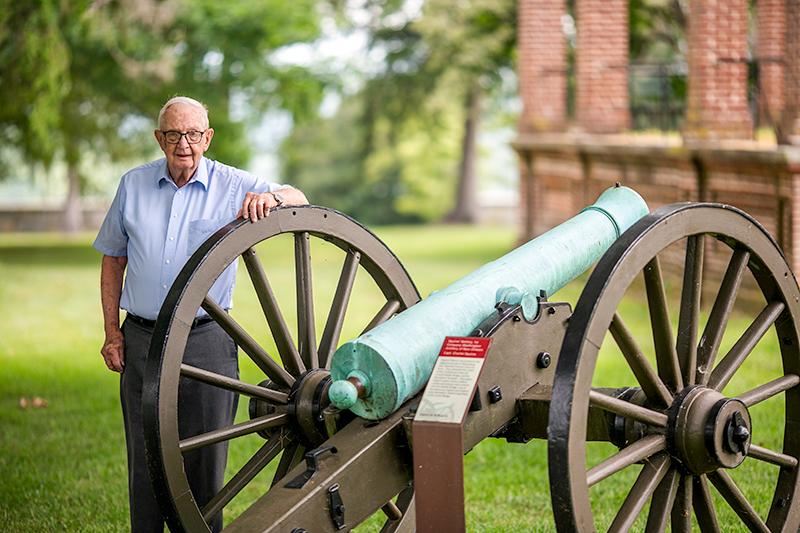 For John Schildt, history began to come alive when he was a preschooler listening to his great-grandmother tell her stories. Eighty years later, Schildt is still making history come alive for anyone who listens to his talks or reads his books, many of them focused on the Battle of Antietam, the legendary 1862 battle that ravaged Sharpsburg.

Schildt’s great-grandmother was 10 when Union soldiers passed by her home on Gas House Pike in Frederick County in 1863, headed toward Gettysburg for what would become another legendary battle. Much later in life, she told young John how she gave the soldiers buckets of milk and bread as they marched by on a dismal, rainy Monday.

“It made me think that history is people and places,” Schildt said. Although his great- grandmother died when he was 6, Schildt continued to press his elders for Civil War stories throughout his childhood. His aunt and grandmother saved clippings of news stories about local residents and their recollections of the war. Most were children during the war who were by then in their 80s or 90s.

Teachers recounted for him stories that their older relatives told. Schildt’s lifelong passion was born. Today, Schildt lives in Sharpsburg, the location of the battle he’s spent decades studying.

But the history bug never left him. As a high school student, Schildt read diaries of soldiers who served in the Civil War and studied maps of battle movements. While a college student, he gave his first tour of Antietam National Battlefield to an elementary school class. Shortly after college, in 1960, he wrote his first book on the Battle of Antietam, “September Echoes.”

He was named to the Maryland Civil War Centennial Commission in 1961. “My great-grandmother would have been proud,” he said. “You never know what kind of seed you’ll plant when you tell your stories.”

Schildt has planted a lot of seeds, according to Dennis Frye, Civil War historian and retired chief historian at Harpers Ferry National Historical Park. “He brings a distinctive personal quality to his writings, his lectures, and his tours,” Frye said. “John’s style is very poetic.”

Schildt’s drive to learn about the people who fought in the war and those whose lives were forever changed by it kept him reading diaries, letters and other original sources long after the recollections of older family members and friends died with them. 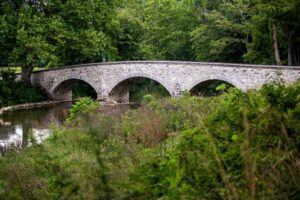 From the Battle of South Mountain to Antietam to Gettysburg, Schildt has spent decades examining the interconnection of the soldiers who marched through, the residents who offered them food and drink, and the strategies that drove the opposing armies. His childhood home in Walkersville was once witness to 20,000 soldiers who marched to Gettysburg with Union Gen. George Meade.

Meade’s soldiers covered 32 miles that day, dragging supplies and equipment, only to wake up the next day and march many more miles toward battle.

Schildt was in high school when his family dropped him off at Antietam Battlefield with a sandwich and a cold drink in his knapsack. Using a map of the area that dated from 1862, which showed a dirt road leading to Burnside Bridge, he retraced the steps of the soldiers in that part of the Battlefield and wrote about his experiences for the Frederick News-Post.

Schildt’s favorite book is “Drums Along the Antietam,” published in 1972. He wanted to tell the story of the river that featured so prominently in the battle. The book starts out in precolonial times and tells the story of the river’s importance to the Catawba and Delaware Indian populations.

The book then chronicles the arrival of the European settlers, the river’s role in the Civil War, and beyond.

The same personal touch Schildt used in “September Echoes” and “Drums Along the Antietam” features prominently in Schildt’s latest book, “Islands of Mercy: Hospitals in the Maryland Campaign September 1862,” which Schildt co-wrote with Gordon Dam-mann, founder of the National Museum of Civil War Medicine in Frederick. 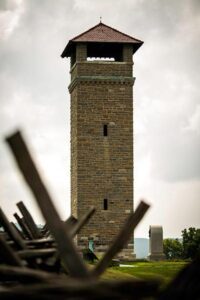 “The idea came to me one rainy night, that there were 18,000 wounded men after Antietam,” he said. “What happened to them?” Hospitals were set up in nearly every building, from large barns to churches to homes.

“After the battle, the weather turned hot, but people had to keep their windows closed to keep out the stench,” Schildt said. The smell of the dead and wounded per-meated a large area extending from Sharpsburg to Boons- boro to Frederick. These details jumped out at Schildt as he pored through letters and diaries from the era.

“People put towels against their windows to keep the smell out,” he said. “Some couldn’t even eat because of the stench.”

It’s these kinds of experiences that Schildt has spent more than 60 years presenting to his readers and tour groups. “John has always felt very comfortable using the same style in the pulpit as on the battlefield,” Frye said. “His programs are always relatable because he tells stories of the people involved.”

The icons of history aren’t perfect, Schildt said. “People were just as gray back then as they are today,” he said. One of Schildt’s biggest historical discoveries was the significance of Lincoln’s visit to Sharpsburg in October of 1862, just a month after the Battle of Antietam.

During that visit, Lincoln walked the hills and valleys of the battlefield and surrounding farms and met with Union generals. He also visited wounded soldiers, both Union and Confederate. After this experience, Lincoln issued the Emancipation Proclamation. Schildt outlined Lincoln’s visit in detail in his 1978 book “Four Days in October.”

Schildt is a founding member of Save Historic Antietam Foundation, which works to preserve Antietam National Battlefield and the surrounding homes and hospitals that served an important role in the battle. Founded in 1986, the organization’s goal is to protect historic sites and views. SHAF also works to promote the kind of economic development that is compatible with the preservation of the battlefield. 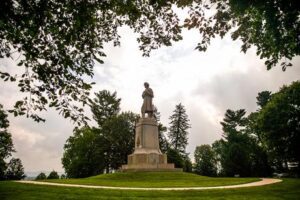 “I regard John as a Washington County treasure,” said Tom Clemens, Civil War author and retired Hagerstown Community College history professor. “He has written and researched so many things, mostly about the Civil War, but also about other aspects of life in Washington County. I’m thrilled that he and Gordy Dammann were able to put this book together.”

Many of the hospital sites featured in the book are marked with a sign that indicates the site served as a hospital for Antietam wounded, and Schildt was responsible for organizing that effort through SHAF, Clemens said. While most of these are privately owned and not open to the public, it’s important to mark their contribution. “It raises the visibility that something significant happened there.”

Clemens added that his wife, Angela, seeks out events where Schildt gives a pastoral invocation so she can hear his inspirational talks.

Chris Vincent, chief of Antietam Battlefield Guides and innkeeper of the Jacob Rohrbach Inn in Sharpsburg, said when he and his wife Amy moved to Sharpsburg, Schildt helped them feel at home in Schildt’s adopted hometown. Schildt is always a featured speaker at the inn’s Civil War Lecture Series each summer, and his lectures draw a crowd of history enthusiasts.

“John is truly a great example for us all,” Vincent wrote in an email. “He is always working on a new talk, project or book, and when he’s not, he’s out giving a tour.”

Vincent recalled helping John set up a slideshow last year, and they got to talking about their tours. “John said to me, ‘You know, I wish I would have kept count of all the tours I did back then. I bet I’ve done well over 2,000.’”