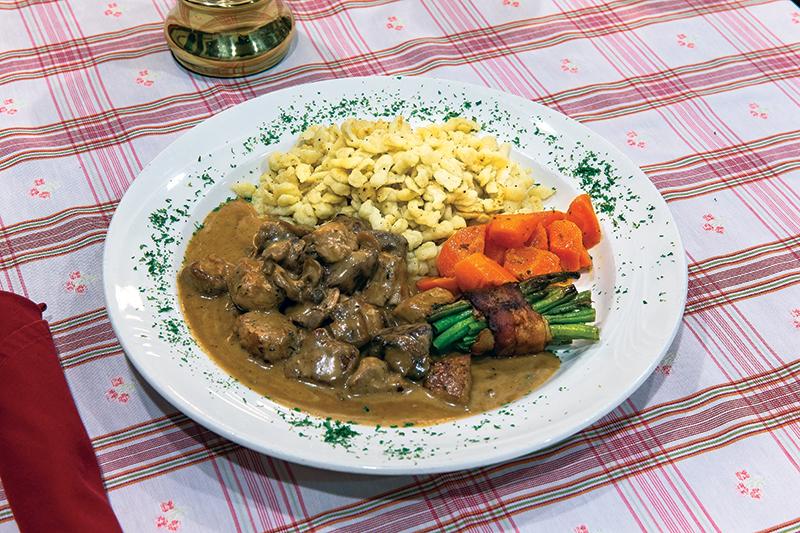 Schmankerl Stube welcomes patrons back with a taste of sunny Bavaria

By April Bartel and photos courtesy of Dieter Blosel

For more than 32 years, downtown Hagerstown’s Schmankerl Stube delighted patrons with authentic German fare that is both hearty and refined. The atmosphere exudes the warmth of old Bavaria, from its European bistro-style outdoor seating, encircled with cheerful flowers and wrought iron, to its etched windows, textured plaster walls, and carved timber details. Guests are transported to a faraway village as they step through the front door. The name says it all. Schmankerl translates to “culinary delicacy” and Stube means “cozy room.” Native German Charles Sekula founded the restaurant in 1988, re-creating a piece of home to share with new compatriots and putting down deep roots in the local community. He hired fellow countryman Dieter Blosel as executive chef in 1999. Dieter took over as owner/operator in 2008 and made the restaurant his life’s devotion as well.

Schmankerl Stube evolved significantly in the last two years, even while remaining true to its core vision. In January 2020, the restaurant celebrated a grand reveal to cap off nearly two years of prolonged construction that doubled its seating capacity and significantly enlarged the kitchen. Known as a destination restaurant for special occasions, the expansion onto a third lot would accommodate larger parties while maintaining the intimate atmosphere. For that entire month, Dieter dedicated a portion of the restaurant’s earnings to Hospice and the Arc of Washington County. CNB Bank, which worked with Dieter on the venture, matched those funds, raising $10,000 for local charities.

Dieter shakes his head recalling the stress of construction as they hammered through solid rock and the relief that came with the project’s completion. In that moment, the rumbling threat of a strange, new flu devastating China was still a world away, but things changed quickly. By March 15, restaurants across Maryland were shuttered. The new and improved Schmankerl Stube went dark. Dieter quickly donated the food on hand to REACH Health Services Program, Heartly House, and personal friends. His 30-person staff turned to unemployment or scrambled for other jobs. Dieter’s face clouds with shared anguish in the recollection, “They have bills. They have kids. They have to survive.”

Some restaurants were able to muddle through by turning to takeout orders prepared by minimal staff for diners willing to brave the unknown. Fast food businesses relied on their drive-throughs, but sales volumes plummeted across the board as would-be customers hunkered down at home. Schmankerl Stube was in a unique predicament. Throughout its three decades, the restaurant built a reputation as the place to go for special occasions. Diners traveled from up to 100 miles away for birthdays, anniversaries, and romantic evenings. Dinner at Schmankerl Stube was, after all, as much about the experience; seeing the dirndl-clad servers, tapping a foot to the buoyant German music playing overhead, enjoying an imported beer from a nation known as the epicenter of modern brewing or savoring a refreshing sip of chilled Schönauer Apfel Schnapps among friends and loved ones. The novel situation helped the establishment weather normal economic ups and downs but left them unprepared for the quickly shifting tide of business in a global pandemic.

Dieter shrugs, “You don’t travel an hour for takeout.” Before COVID-19, he explains, “Our customers make up their minds to come to us long before they get hungry. We did not have these big ups and downs because you generally try to save money on everyday things. A celebration is the last thing you cut out.” So, there was no automated ordering system in place, no walk-up window, and to-go orders were rare.

A gregarious host, Dieter scrambled to find a way forward. Mother’s Day, typically the busiest day of the year for restaurants, was a turning point. Conversations with the restaurant manager and friend Kevin Simmers, founder of Brooke’s House, blossomed into an idea. Dieter created a packaged deal around a few of the menu’s most popular options, complete with dessert, a fresh flower for Mom supplied by Wilde Rose floral design, and a corresponding donation to the sober-living home for adult women. CNB Bank helped promote the fundraiser and the chef made a rare Facebook post. He hoped to rouse at least 100 customers, daring to envision 200. Those around him cautioned against being too optimistic, especially with limited staff available and short notice.

Fans placed orders by email and Facebook messages and the kitchen churned out a hundred dinners per hour, says Dieter, searching for words to describe the overwhelmingly positive response. “It was so uplifting. As much as everything really sucked around us, with the restaurant shut down, hearing negative news, but that experience was a, ‘Wow! We will make it.’ It was transformational after two months without any income.”

Maryland restaurants reopened inside dining at 50 percent capacity in mid-June, and Dieter counts another blessing. For all the recently added space, the restaurant effectively operates at pre-construction capacity. “During the week we are close to normal,” he says. “On the weekend, we are off.” He suspects that diners feel safer venturing out midweek because they expect smaller crowds.

Fear is still a factor. “It is something everybody has in the back of their minds,” says Dieter. “I think I speak for all restaurants. I feel like we are struggling to do the best we can. We have to make adjustments to cope. Restaurants are here to give you a good experience and a safe experience as much as we possibly can.” He chuckles, “It’s hard to wear a mask in the kitchen, but we do. I do a lot better with it than I thought I would.”

Not all restaurants have been as lucky. A Yelp data report shows steep attrition in the industry. As of mid-July, nearly 16,000 eateries have closed permanently due to the pandemic. On the flipside, the global emergency also stirred communities to rally around local restaurants. Online groups sprung up to spotlight small kitchens and start-ups, often encouraging patrons to purchase gift certificates during quarantine to help favorite restaurants stay in business. In a way, the shared challenge is bringing many restaurants and their supporters closer together. That makes a difference, according to Dieter. “Everybody has challenges. The most important thing you can have in life is to have something to hope for and look forward to. There are still reasons to celebrate.”

Almost all staff have returned, so Dieter and the Schmankerl Stube crew are ready to welcome diners back whether guests choose to utilize the new take-out system or stop by for a socially distanced meal. Everything is prepared in-house with fresh ingredients, from the toothsome European-style bread served with deftly-spiced Liptauer cheese spread, to the rotating array of indulgent desserts. Guests can get their fix of Herzhafter Sauerbraten, tender braised beef in sweet-sour sauce served with apple-sweetened red cabbage and bread dumplings, or Käseschnitzel, pork tips in a silky Camembert – provolone cheese sauce alongside spätzle and carrots. “I can eat that one a lot,” admits Dieter. The house’s slow roasted pork shank with creamy sauce, Knusperige Schweinshaxe, is only by pre-order since it takes 3 ½ hours to make.

Desserts are a special delight because Dieter enjoys making them. He considered specializing in pastry during this training. Top sellers include the Schwarzwalder Kirsh Torte (Black Forest Cake) and Munich Cake, layers of vanilla cake with Bavarian cream. The cheesecake, Käse Kuchen, is a uniquely textured variety made with quark cheese and a hint of lemon on a short crust.

“Growing up,” says Dieter, “this is the food I ate every day.” That early experience shaped a philosophy that informs Shmankerl Stube’s brand of hospitality. “In Germany we a have a saying, ‘Love goes through the stomach.’ Life is hectic. You need to find time to have a meal together and talk and enjoy.”

It’s nice to know that some things never change.