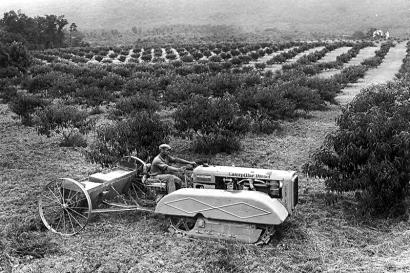 Apples have been grown in Washington County since the first settlers crossed the Blue Ridge.  Small orchards were planted on many of the farms, but it wasn’t until later that commercial production began. The Depression years of the 1930s rendered a heavy blow to the fruit industry and hundreds of acres were abandoned.

In the western part of the county there were orchards named Cohill, Fairview, Hepburn, Tonoloway, Dillon, Woodmont, and Glaize, to name a few.  All of these orchards have closed (three of them between 1986 and 1987). The Smithsburg area also boasts several orchards such as Rinehart, Gardenhour, and Lewis that are still around today. South of Hagerstown Linden Hall Farm is still in operation.

Apples come in many varieties, with 2,500 grown in the United States.  Washington County’s apple basket brims with several different varieties. Some of the varieties are better for eating than others. Some are old standbys like the Stayman which has a yellow flesh, is juicy and crisp. Red Delicious is firm in the early season but tends to become mealy after long storage. Golden Delicious is one of the somewhat sweeter varieties. The mildly tart, crisp, Jonathan is a deep shiny red. Winesaps are good for eating and salads.

Some apples are recommended for pies because they hold their shape in slices. Among them are the Jonathan, Stayman, and York. For cooking, you want tart, flavorful apples that cook in a short time. Winesap, Romes, Stayman, York Imperial, and McIntosh fill the bill for this requirement.

Take some time to drive around our county, visit an orchard or two this fall and reflect on the importance of apples in our lives as you bite into a crisp, flavorful apple. Maybe you’ll find it “a-peeling.”