Turn Your Eyes to the Skies 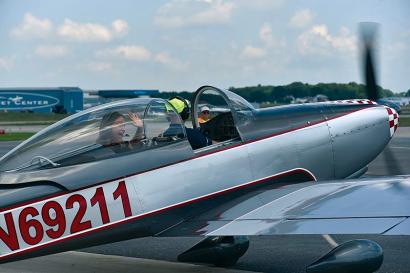 By Ray Franze and photos courtesy of EAA

From the sands of Kitty Hawk, N.C. to the launch pads at Kennedy Space Center, Fla., Americans have sought to defy gravity through powered flight—reaching for the sky and then the stars. Reminiscent of the Mercury, Gemini and Apollo programs, SpaceX’s May 30th launch of a Falcon 9 rocket and Crew Dragon capsule renewed manned space travel from the United States. The launch also renewed that child-like enthusiasm for aeronautics where we look up each time we hear something flying overhead. For local aviation enthusiasts, EAA Chapter 36 is an ideal organization to cultivate and share that passion.

EAA Chapter 36, based at Hagerstown Regional Airport, is the area’s local chapter of the Experimental Aircraft Association (EAA). EAA bills itself as, “A community of passionate aviation enthusiasts that promotes and supports recreational flying [and seeks] to grow participation in aviation by promoting the ‘Spirit of Aviation.’”  Though one does not need to be interested in flying airplanes to actively participate in the organization. “EAA members represent every aspect of aviation and often have multiple interests. We fly them. We fix them. We even build them.” EAA Chapter 36 provides opportunities for both young and old to engage in aviation through a variety of activities.

Volunteer pilots provide free flights to children ages 8-17 through the Young Eagles program.  The goal is to introduce youth to aviation and, if interested, help them earn a pilot certificate.  The benefits of the Young Eagles program go beyond a one-time flight experience. Young Eagles are eligible for a free EAA student membership which provides access to an online Learn to Fly course, funding to cover the costs of a Young Eagle’s first flight lesson, an endorsement to take the FAA’s Knowledge Test, and reimbursement of the exam’s cost upon successful completion. EAA Chapter 36 typically hosts one Young Eagles event per month from April through October. EAA chapters have provided over 2.2 million Young Eagles the gift of flight since the program’s inception. When weather and pandemics don’t interfere, EAA Chapter 36 is known to provide flights to over 200 kids per year.

Thanks to the assistance of EAA and the Ray Foundation, EAA Chapter 36 is able to offer its second Ray Aviation Scholarship, which provides up to $10,000 in flight training funds for an area youth. Elizabeth Thornwall, the chapter’s first Ray Aviation Scholar, passed her FAA practical exam last December—becoming a private pilot less than a month after her 18th birthday. Ideal candidates have shown a passion for aviation through multiple Young Eagles flights, a commitment to EAA by attending chapter meetings and participation in other chapter activities as well as an ability to adhere to required training milestones.

The chapter also established the Walter Green Memorial Scholarship for someone pursuing a career in Aviation Maintenance Technology (AMT) at the Pittsburgh Institute of Aeronautics’ Hagerstown campus. The school’s AMT program prepares students for the FAA Airframe and Powerplant Certification exams. The chapter plans to present its inaugural award later this year.

Some members find as much excitement—if not more—in building an aircraft. Precision measurements and precision cuts help transform a collection of fabric, metal and wood into a flyable aircraft. From home projects to building aircraft, there is an unmistakable sense of pride found in a finished project at the expense of one’s own elbow grease, sweat, tears, maybe a little blood, but likely a little agony along the way.

EAA Chapter 36 is nearing the final stages of its current project—a Stolp SA900 V-Star aerobatic biplane. In addition to the chapter’s build project, many members have built, are building, or will soon build their own aircraft. Through EAA and Chapter 36, technical counselors and flight advisors are available to provide guidance and oversight with the projects.

A new initiative in 2020 is EAA’s Young Eagles Build and Fly Program, “[A]n intensive RC model building and flying initiative to introduce youth to aircraft construction and the fundamentals of flight.” Through the program, EAA Chapter 36 can acquire an electric-powered eKadet LT-40 kit, all building materials, electronics and accessories, an indoor RC model and flight simulator software.

Many are already familiar with Hagerstown’s rich aviation heritage dating back to the early–1920’s. EAA Chapter 36 helps bring aviation history alive when it hosts the Ford Tri-Motor.  The three-engine, corrugated aluminum aircraft exemplified luxury in passenger air travel as it proved the viability of commercial airline service. Known as the “Tin Goose” and the largest civil aircraft at the time of its maiden flight in 1926, the chapter is exploring potential dates to host the Tri-Motor for the first time since 2017.

Each year the chapter celebrates member accomplishments, enjoys the treasured camaraderie shared throughout the organization, and listens to presentations from guest speakers. Attendees in 2020 were treated to a spectacular presentation about NASA’s Artemis program by NASA Flight Director, and area native, Scott Stover. The Artemis program seeks to resume exploration of the lunar surface, study man and machine’s prolonged exposure beyond low earth orbit and prepare for crewed missions to Mars. SpaceX’s recent launch was a timely example of America’s progress in space exploration.

Each year EAA hosts what is arguably the world’s greatest week-long gathering of aviation enthusiasts—at AirVenture in Oshkosh, Wis. Avgeeks return year after year to AirVenture, but it has less to do with the air shows, the seminars, the vendors, or the static displays—it has more to do with the heart and soul of the aviation community as a whole. “We love airplanes. But it goes beyond that.  It’s about passion, camaraderie, that ol’ can-do spirit, and a grassroots way of sharing our love of aviation with others. It’s the airplanes that bring us together. It’s the people who keep us coming back.”