Fighting Back Against Parkinson’s Disease 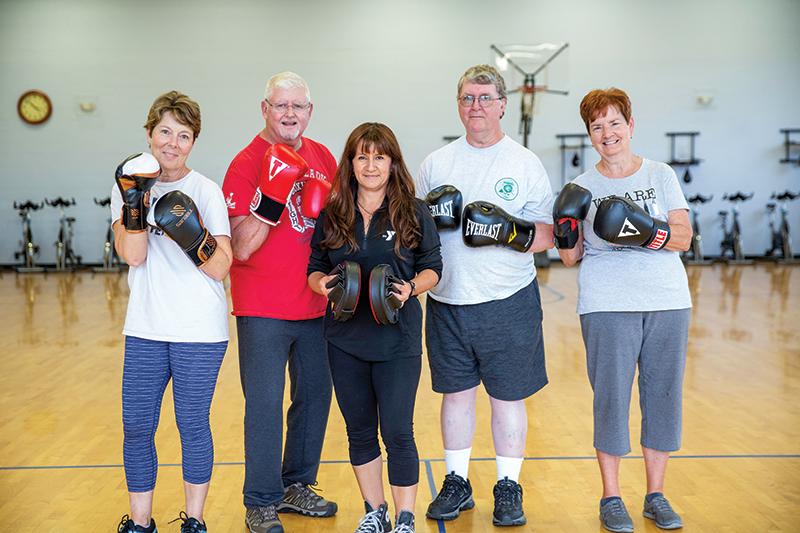 Rock Steady Boxing at Hagerstown a Big Hit with Participants.

By Jane Schmidt and photos by Turner Photography Studio

Twice weekly a group of tri-state area fighters filled with grit, determination and courage venture to the Hagerstown YMCA on a united mission of self-care. And while they aren’t entering a ring to spar against another boxer, these resilient fighters from all walks of life gather together to challenge a common, ever-present opponent within each of their lives – Parkinson’s disease.

Affecting over 60,000 people in the U.S. each year, Parkinson’s disease is a common, incurable chronic disorder of the central nervous system affecting movement. Nerve damage in the brain causes tremors, slow movement, stiffness, and balance loss. Disease symptoms vary greatly in severity and type while potentially being unique to those afflicted, making diagnosis a difficult, lengthy process.

Rock Steady Boxing was established at the Hagerstown YMCA in May 2017. The Hagerstown Y is one of 871 affiliates in the worldwide program, which reaches 43,500 Parkinson’s boxers around the globe.

A Hagerstown YMCA member who participated in Rock Steady Boxing in Rockville approached Hagerstown YMCA CEO Maria Rubeling about initiating the program locally. “Within five minutes I realized we need to get this off the ground. I met with trainers from the Rockville gym and had them come to Hagerstown to meet with the Parkinson’s support group,” Maria recalls. “We heard loud and clear that a program such as this was desperately needed in our community.”

Rock Steady Boxing runs for six weeks, meeting two days weekly for an hourlong workout. There are two-week breaks between sessions, during which time class participants may use the Hagerstown YMCA weight room.

Each Rock Steady Boxing class opens with a backdrop of pulsing, motivating music as participants form a circle, with Krista shouting fun, oftentimes silly questions which must be answered with shouted responses. “Parkinson’s affects ability to use a loud voice,” she states. “We do this as an icebreaker and to help ward off this symptom.”

Hagerstown YMCA Fitness Director Sonia Reyes gets participants pumped during warmup, which may include walking, skipping, or running laps around the gym accompanied by designated arm movements or doing squats. “Rock Steady Boxing demands balance, timing, gait and hand/eye coordination, all of which are challenged by Parkinson’s,” explains Sonia.

Once warmup is completed, participants, who are grouped by their abilities, take turns at various stations throughout the gym. “Our classes are always different, no two are alike. We work on all muscle groups to improve fine motor skills, balance, and how to properly get up from chairs or the floor to prepare for falls. The group may use hand weights, play ring toss and pickleball, run through variable obstacle courses with different challenges, or perform ball toss with a partner while walking sideways, and floor-based exercises focusing on strengthening core muscles,” explains Krista.

Once Rock Steady Boxing started at the Y, a core group of participants continued taking sessions and have since formed a close-knit support network. Christine Stoops of Keedysville, who also enjoys chair yoga, looks forward to class. “It’s very helpful. The sequencing and memory activities are good for the brain. We encourage and help each other to keep moving. It’s fast-paced and goes quickly.”

Bill Flohr of Waynesboro, Pa., is a retired pharmacist whose journey toward Parkinson’s diagnosis took five years. Bill immediately started going to the gym upon diagnosis and joined the first Rock Steady Boxing program session at the Hagerstown Y after hearing about it from his daughter. “I signed up right away,” Bill recalls. “I have never regretted joining. It’s helped me increase my stamina and energy. I love hitting the heavy bag, which I nicknamed Mr. P.”

Martinsburg, W.Va. resident Bill A., who spent 20 years in the military and ran daily, was so impressed when observing the class before signing up, he immediately bought gloves. “It’s an outstanding program. Almost immediately I noticed my tremors reduced and stronger balance, including stairs. During the second session I could jump rope. Krista and Sonia push us in a safe way to expand and go beyond our boundaries to preserve our capabilities,” he shares. “We are blessed with very gifted coaches.”

Fred Shetter of Waynesboro, Pa., describes the program as a support group with activities. “We gather before class to chat about meds, information, and ask after each other. It helps to share our experiences.”

After attending the community meeting, Carolyn Kilonsky of Middletown, signed up for the program. “I decided to give it a try as a way to get exercise and improve stamina and coordination,” explains Carolyn, an athletic person who enjoys tennis, walking and yoga. “It keeps us healthy and able to do more things in everyday life.”

For these fighters, Rock Steady Boxing has enriched their lives through fitness and friendship. “We are here to make the best lives we can and not let Parkinson’s take control,” adds Carolyn. Bill Flohr wholeheartedly agrees. “If you have Parkinson’s, you have to keep moving. Rock Steady Boxing at the Hagerstown Y is very upbeat and offers great group support. We look forward to asking Krista and Sonia what kind of craziness and fun we’re getting into.”