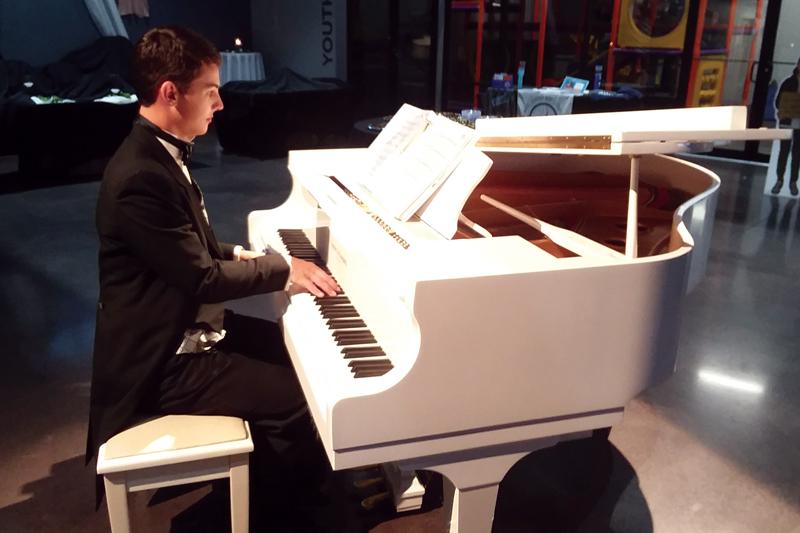 With his hands poised over the keys of a piano, Mack Berry flashes the crowd a smile before filling the air with the smooth notes of George Gershwin. It’s easy to see why Mack is charming audiences around Hagerstown with his entertaining music and engaging style. And this versatile 19-year-old musician is more than just a pianist: He’s a natural performer who dresses for the occasion, even if the occasion calls for a costume and props.

A few years ago, when his peers were practicing on the football field or basketball court, Mack decided that piano was his sport and focused on sharpening his musical skills. His hard work paid off last year at the annual Teens Have Talent competition, which is in its 14th year. In the finals of the 2019 contest, 20 teenage acts appeared on stage at the Maryland Theatre, attempting to impress the panel of judges and walk away the winner. Mack’s skilled piano performance of Trans-Siberian Orchestra’s Wizards in Winter–while wearing a wizard costume and a flowing white beard–stole the spotlight and won him the $1,000 grand prize.

Mack, a Smithsburg resident, began his musical education at the age of 3 with piano lessons. In his childhood, practicing the instrument was more of a chore than a passion. But as he grew, so did his love for music. “I started really enjoying it when I was about 16 years old,” he says. “At that time, I started playing the type of songs I liked, such as rock ’n’ roll. So, the piano became a lot more fun.” It was then that Mack realized he wanted music to become his future career, and he started working diligently to make his dream a reality.

Aware that it might take some time to fully support himself through paid piano jobs, Mack is also employed with local HVAC company BG Services. He spends four days a week driving the company truck to job sites and assisting with the maintenance, installation, and troubleshooting of HVAC systems. “It’s rough on my hands, so I have to be careful, but sometimes the job just needs to be done,” says the hard-working youth. “I think it’s important to learn a trade, and the people of BG Services are really supportive of my music.”

In addition to his encouraging HVAC co-workers, Mack gets immeasurable support from his church, friends, and family. As the oldest of five children, he’s able to access the individual talents of his multiple family members. His siblings and parents assist him with everything from costume design to videography. “I couldn’t do it without them,” he says. “They’re the reason I’m able to have a YouTube channel.”

When asked about his YouTube channel, called Mega-Hurtz Piano, Mack’s modest smile reveals his humble side. “I wanted to create something fun that was also family friendly,” he says. “It’s more than just a boring video of someone playing some cover songs.” With the same showmanship that won him the Teens Have Talent competition, Mack entertains his Mega-Hurtz Piano YouTube fans with costumes, playful scenery, and delightful music. It’s impossible to question his skill as a pianist after seeing him play Elton John’s Crocodile Rock while wearing a full crocodile costume complete with a giant mask, or watching him act like a rock star as he plays We’re Not Gonna Take It while dressed as Dee Snider of Twisted Sister. The time and effort required to update his channel seems enormous, but Mack continues because “it keeps me accountable because I have to continually create new content,” he says. “And it’s an engaging, safe place for families to find entertainment. We do little things to make it interesting, like hiding a yellow truck and blue elf doll in every video.”

Even without the costumes and props, Mack’s versatility can be found in his other musical performances. As the keyboardist and a vocalist for Full Effect–a Maryland band that can be found in local clubs, restaurants, and pubs–Mack is also the youngest member of the five-man group by more than 45 years. But his youth doesn’t stop him from jamming to classics by The Temptations, Merle Haggard, and The Righteous Brothers, or from rocking with songs from ZZ Top and Lynyrd Skynyrd. “Full Effect has been a fantastic experience for me. The band has taught me how to be confident on and off stage,” says Mack. To add another element of entertainment, Mack sometimes uses his keytar–a lightweight, portable keyboard that’s held much like a guitar–so he can walk off stage and dance with the audience. “The keytar was purchased with my winnings from the Teens Have Talent competition,” says Mack. “I wanted to reinvest the money in my future.”

Full Effect’s gigs aren’t the only paying jobs that Mack has performed since his 2019 Teens Have Talent win. He’s played the piano for special events, churches, and local restaurants, and has provided both elegant background music and lively tunes. “I try to read the crowd and see what they want,” he says. “If people are having conversations at their tables, then I’ll just play in the background. But if they want to be entertained, then I’ll work to get them involved in what I’m doing.” Mack’s repertoire includes a wide range of well-known cover songs, and his pleasing mix of classic rock, pop, and country can get his audience humming or singing along. “I’m working hard to build my reputation as a professional and versatile pianist. I’ve been reaching out to businesses in the Tri-State area,” he says.

Time management is Mack’s biggest challenge. Late night gigs with Full Effect can make it difficult to adjust his sleep schedule for his early morning HVAC work, and he continues to broaden his musical abilities with voice lessons and songwriting classes. He is active with the Storytelling Program produced by Hagerstown’s Authentic Community Theatre and has also appeared in their teen production of “Les Miserables.” Yet despite all the hours spent developing his skills, Mack finds time to take cooking classes, support his siblings’ sports teams, and read biographies. “We only get one life to live,” says Mack. “So I read biographies to learn about the things other people have done with their lives, then I can decide what things I may want to pursue.”

So, what’s next for this proficient pianist? He’ll be returning to the Teens Have Talent stage at the Maryland Theater on March 20 for another impressive piano performance before handing the $1,000 check to this year’s grand prize winner. “After that, I plan to perform in a variety of venues, including restaurants and event centers. I have a few weddings booked in the future, too,” Mack says. One thing is certain: he’ll continue playing music for an audience. “I love being on stage and I enjoy making people laugh,” he says. “I love that I am using my gifts to give other people joy.”

To book Mack Berry for your event or business, visit www.mackberrypiano.com, email: mackberrypiano@gmail.com or call 240-310-9457.