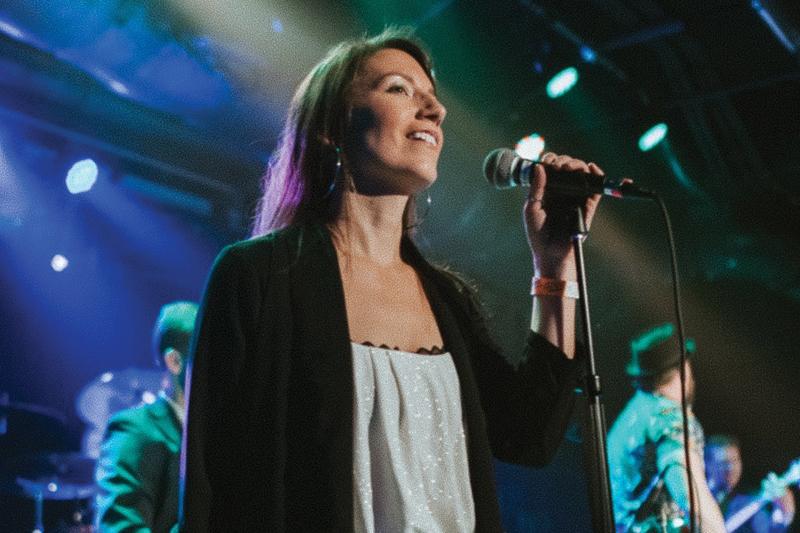 Megan Burtner was born to sing. “I feel like I was singing before I was talking,” the 2004 Boonsboro High School graduate says. Burtner, who goes professionally by Megan Leigh, fondly recalls growing up singing in local Western Maryland church and school choirs. Meg credits her versatile vocal stylings and ability to harmonize in any musical setting to the “nurturing environment” of the choral groups that influenced her desire to share her talent on a wider stage. Essentially self-taught, Meg’s only formal vocal training has included a semester of vocal lessons at Shepherd College and a recent online vocal course with a teacher based in New York City.

While Meg has always found herself immersed in music, up until a few years ago she would mostly attend the shows of other musicians and support their efforts while wistfully wishing she, too, could make music her career.  In 2017, a period that Meg describes as “the turn-around year,” her wish came true and new and exciting musical opportunities have continued to arise almost non-stop since then.

It was during this year that Meg discovered a Nashville folk trio, The Arcadian Wild. The band was traveling the U.S. and performing house concerts—intimate performances right in the living rooms of everyday fans. Cindy and John Burtner, Meg’s parents and owners of The Barn at Hebron Homestead located on their Burt-Branch Farm in Keedysville, had used the barn to host weddings and Meg knew the space would be the perfect venue for a concert. She signed up on the band’s website to request for them to play at the barn.

“I never thought that they would actually get back to me and come up from Nashville to play, but they did,” says Meg. She and her family even hosted the band overnight and the experience inspired her to believe that “ordinary” people who happen to be musically talented, could travel around the country and potentially make a living playing at various venues—including living rooms of listeners who appreciate their music. At that point, Meg says she started to get into the local music scene of the D.C. and Baltimore area and focus on networking—making friends with similar minded musicians who were willing to give advice and guide her through the process to becoming a full-time musician.

Meg met Eli Lev, a popular Washington, D.C.-based folk singer, in May of 2018 and the two quickly hit it off musically and began doing shows together by that fall. Meg calls Eli a “good fit,” both musically and professionally. Eli had performed solo up to that point but would bring Meg on stage at his live shows to showcase her harmonies to his original song. The duo began working on covers and penning original songs which culminated in a two-week tour of the Midwest in November 2018.

Meg had been gigging with Eli for only a brief time before being asked to join The Henchmen, a Baltimore-based indie rock group and recipient of many local music awards, in the summer of 2018.

“Everything seemed to happen at once. I began to think ‘maybe I should be doing this,’” Meg says.

Her involvement with Eli and The Henchmen has led to Meg taking the stage at prominent venues such as the 9:30 Club in Washington, D.C., and the Mockingbird Theater in Nashville, Tenn. Nashville is also special to Meg as it is where she and Eli recorded their upcoming album, a duo project under the name “Wild Whispers.” The album is due out in late March and will be released alongside a professionally produced music video for the first single. The video, under the direction of Laurel­—based videographer Luke Roberts, will also be submitted to National Public Radio in the hopes that “Wild Whispers” will be chosen to perform for the popular “Tiny Desk Concerts” intimate concert series.

While she is appreciative of being able to tour the country, Meg’s heart remains local. She says her favorite shows are ones close to home where she can “open up” to a familiar audience.

“You can do the same show with the same songs and the vibe will be different depending on the audience and the atmosphere,” Meg says. “So, it’s important to be able to read each crowd and engage them in different ways.”

Although hard pressed to choose one favorite venue, she says a standout moment was filming and singing Eli’s song “Oh My Lord” at the Garden of the Gods in Colorado against a gorgeous natural backdrop of sand-stone formations and the Pikes Peak mountain range.

Because of developing a “really good ear” from her early years singing in a group setting, Meg’s forte is singing harmonies. Many times, she listens intently to a song that’s already written and adds in “whatever feels right.” In terms of songwriting, Meg tends to hear the melody and lyrics first then heads to the piano to determine the key and chord structure.

While the songs that she performs with Eli can often be classified as “folk,” Meg doesn’t want to pigeonhole herself into a genre as she is still “experimenting” and confesses that she is influenced by many different musical styles. Listeners can count on a Megan Leigh song being “harmony heavy” regardless of genre.

“I know I’m doing what people would consider ‘folk,’” she says. To that end, Meg states that she has an original single she’s hoping to put out around the end of the year that is “very Joni Mitchell inspired,” an artist whose voice her own vocals have been compared to often–a comparison that Meg takes as a compliment.

“I want to write a rock/punk/emo song because that genre is so nostalgic for me,” she says.

“There will be shades of a lot of different influences in my music” except for perhaps metal, laughs Meg.

“I want to make music that I would listen to and I think that’s what will keep me passionate” about making music, she says.

Meg’s short-term goals are more collaborations with other artists and a maintaining a constant stream of content to put out on YouTube and other media outlets, as well as “continuing education” which includes master classes in social media marketing.

“If I do it for another couple years, fine. If I do it for the rest of my life, great. I don’t have to know what’s going to happen but right now, it’s working,” Meg says.

Meg’s itinerary for the upcoming year includes destinations both local and overseas. She and Eli will be traveling to Austin, Texas in March then to Florida and up the East Coast in April. Another cross-country tour from the end of April through the whole month of May will lead to more shows in June and July that will be closer to home. They have a planned performance at the Washington County Ag Expo in late July, Blue Mountain Winery in Funkstown in June and Dan’s Taphouse in Boonsboro on March 7.

Meg comes home to The Barn at Hebron Homestead on June 27 for a performance that not only will be a fundraiser for Sound Affects, a crowdfunding platform for cancer research, but also an event that includes a special appearance by the Eavesdrop Trio, an acoustic folk and soul group of three talented women from Massachusetts, and culminating with Meg and Eli making their performing debut as “Wild Whispers.”