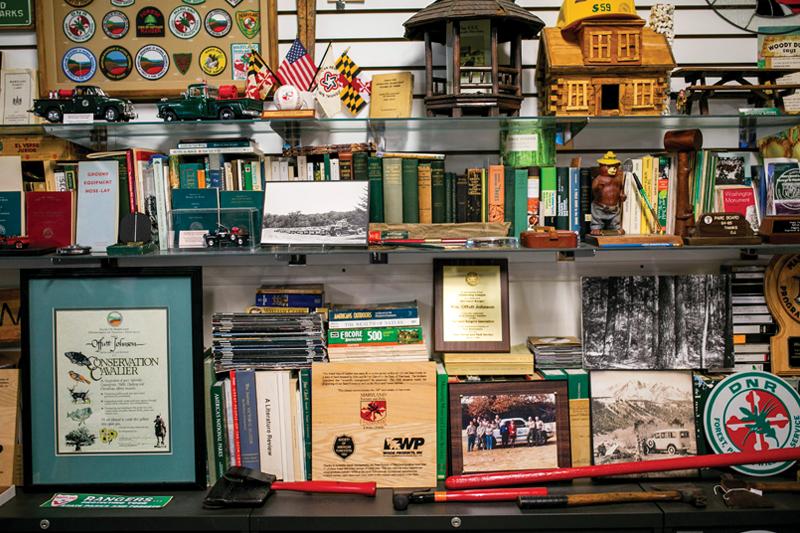 Greg Bartles lives on a wooded slice of paradise on the edge of Greenbrier State Park near Boonsboro. He spent most of his career protecting Maryland’s parks and open lands as a natural resources police officer. Now retired, he’s using part of his land to share the story of the state’s conservation efforts.

On his property, Bartles built a large, open building to store heavy equipment. But the upper part of the building turned out to be a perfect spot for a small museum. The Maryland Conservation Agency Museum tells the story of state conservation efforts through photos, memorabilia, documents, letters, and artifacts. The agency’s story, however, began long before the Department of Natural Resources formed in 1969.

Today’s DNR has its roots in the Maryland Oyster Police, which began in 1868 to regulate oyster harvest-ing on the Chesapeake Bay. Other early state agencies formed to monitor outdoor activity included the State Fish Commission, which started in 1874, and the State Game Warden program, which started in 1896. The Board of Forestry was established in 1906, and most state parks opened between 1945 and 1975.

These disparate efforts to protect the state’s natural resources all came together under the umbrella of the Department of Natural Resources. The Natural Resources Police, or NRP, not only protect the water-men, they make sure hunters, hikers, and fishermen follow rules. They arrest poachers and monitor the health of wildlife.

Bartles, 67, a retired NRP officer, opened the private museum next to his home 10 years ago. On display are rows of old hunting rifles, plaques, books, photos, certificates, and more. These tell the story of state conservation through the years.

Bartles grew up in Hagerstown. “I loved hunting and fishing and canoeing,” he said. After high school, he worked for Pang-born, a metal processing factory in Hagerstown. But he felt at home when he got a temporary job with DNR in 1977-78. After that ended, he worked in local law enforcement for few years. In 1984, he was able to combine his skills in law enforcement and his passion for the outdoors when he qualified for a post with the NRP.

At first, Bartles worked on the Eastern Shore. He was assigned to Washington County in 1989, and later worked in Central and far Western Maryland. In the 1990s, he and his wife Mary Jo, now a retired Maryland Park Services ranger, built a house adjacent to Greenbrier State Park. They later bought a few more acres across the road. In 2010, Bartles put up the building that now houses his museum. Three years later, in 2013, he retired, and the museum became his focus.

Bartles hosts Scout groups, school groups, and community organizations whose members want to learn the history of Maryland’s state parks, state forests, and state waterways and the stories of the hunters, fishermen and women, and outdoor lovers who use these resources. Many local conservation groups have meetings there.

There is a large sign once belonging to the aviation division of the NRP. A row of stuffed ducks represents most of the game waterfowl found in Maryland. A large wild turkey is on dis-play, framed by colorful plumage. Stuffed deer remind visitors of the state’s numerous whitetail deer, a symbol of healthy open lands, yet a problem when it comes to preserving delicate vegetation. Various species of Maryland fish are mounted on a wall at one end of the room.

Back in 1993, Bartles went to a Natural Resources Police (NRP) celebration marking the 125th anniversary of the Oyster Police. He saw something he wanted to collect. “There were a couple of shoulder patches from some of the older game wardens,” he said.

He wanted to gather a collection of patches that charted the agency’s progression over the years. He couldn’t get all the original patches, but he suggested that leadership reproduce images of the patches. “They loved it,” he said. “They called me to Annapolis.” The images were combined into commemorative prints. In total, 125 prints were made, one of which hangs in the museum.

At the commemoration, Bartles chatted with retired officers and listened to their war stories. They gave him mementoes from their careers. From then on, Bartles collected photos, signs, documents, and other artifacts detailing the work of game wardens, fisheries officers, and park rangers.

“People would retire, and they would clean out their offices and throw stuff away,” he said. He didn’t want to see this history disappear, so he accepted many of these documents and mementoes.

“The collection got so big, it was overwhelming my house,” he said. In 2010, he built his equipment garage, and decided to house his collection above the garage. Some of the work was hired out, but Bartles built most of the structure himself.

“It’s still a work in progress,” he said. But it has what many antiques need, and that’s temperature and humidity control. Bartles keeps the temperature at a minimum of 52 in winter and a maximum of 78 in summer. Utilities cost $4 a day, including Wi-Fi. The collection is augmented by shelves of old natural resource books, many of them out of print. Some of these chronicle Maryland’s oyster wars.

Numerous photos tell the story of outdoor protection in Maryland. There are photos of ice breakers on the Chesapeake. Other photos show game wardens working in some of the state’s most remote areas, in woods, in fields, working in deep snow, heavy rain, and searing heat. Many of the photos are from old newspaper and magazine clippings.

There are also photos of old vehicles officers used to get into those hard-to-reach areas. Photos of the agency’s first K9 dogs show a bloodhound and a German shepherd. There’s an old magazine story about the state bird, the Baltimore Oriole, written by one of Maryland’s early female game wardens, Hattie Reynolds.

Anyone interested in gun history may want to see the large punt gun on display. This 19th century weapon is about 10 feet long, with a barrel about 6 inches wide. Commercial hunters mounted these long wooden guns on square, flat-bottomed punt boats to shoot waterfowl. A single shot could kill as many as 50 ducks. These guns resembled muzzle-loading cannons, Bartles said. The practice was outlawed by the late 1800s, although some hunters continued to use them illegally into the early 20th century.

The Maryland Conservation Agency Museum is private. Bartles is happy to open it to groups who set up a time to visit. He doesn’t get state funding. But he does get some recognition from DNR. The agency refers to Bartles as the NRP Historian, and maintains the Maryland’s Conservation History section on its website.

His proudest acquisition isn’t at the museum. It’s the Maryland Oyster Wars Cannon. There are photos at the museum, and Bartles is eager to tell its story to visitors. Housed at the Annapolis Maritime Museum, the cannon was a major weapon in the oyster wars.

Oysters were one of Maryland’s biggest industries in the 19th and 20th centuries. By 1820, out-of-state fishermen were coming to Maryland to take advantage of the Chesapeake Bay’s abundant oyster population. That year, the state decided to limit oyster harvests to state residents, and the oyster wars had begun.

Maryland lawmakers were worried that dredging, tonging, and other harvesting methods would drastically deplete the bay’s oyster population. By 1865, they required state watermen to buy annual licenses. The Oyster Police were created to enforce this law.

The 1,450-pound cannon was made in Virginia in the 1860s specifically for the Oyster Wars. Hunter Davidson, first commander of the Oyster Police, acquired the cannon to be used on the Chesapeake. Mounted on a steam tugboat named Leila, the cannon spent over 20 years protecting oysters from poachers. It was retired in 1891, and bought by a wealthy businessman. American Legion Post 116 in Reisterstown bought the cannon in the 1950s and refurbished it to use in Civil War reenactments.

In 2010, Bartles led the effort to fundraise $40,000 to buy the cannon for DNR. After that, he hauled it around the state to DNR commemorative events. In 2018, he arranged to lend it to the Annapolis Maritime Museum, where he hopes it will remain for many years.

As Bartles talked, a PowerPoint displayed more historical artifacts, along with nuggets of DNR history. “It’s my dream to have the state put a staff person here,” he said. In the meantime, he added, “If I get a request for a tour, I’m happy to share the collection.”