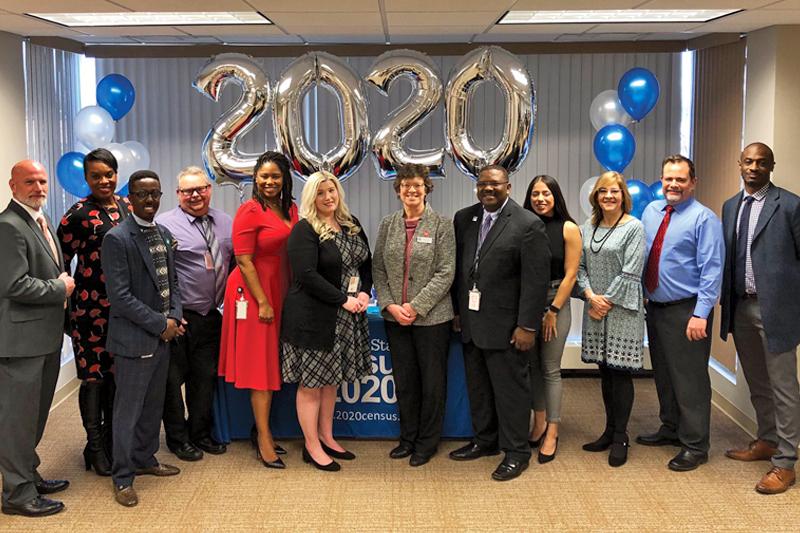 Looking at the 2020 Census and what it means for residents of our community.

The Washington County Commission on Aging delivers freshly prepared lunches to medically homebound seniors daily. It also serves meals to mobile seniors at various locations around the county. In all, last year the commission served more than 47,000 meals.

The costs for those programs add up, but it is paid for by state and federal grants. The amount of funding the county gets through those pro-grams is driven by data from the U.S. Census.

“The census is super important to us,” said Amy Olack, Commission on Aging CEO. “A lot of our senior programs have census numbers tied to the funding source.”

It’s not just important for seniors. If you want to drive on better roads, have modern water lines, have convenient health care, and more, decisions are made based on census numbers.

“The county uses census data to determine where services and infrastructure are needed the most,” said Jennifer Kinzer, the GIS coordinator with the Washington County Department of Planning.

Many people consider the decennial census simply a count of all of the people in the United States, which is what the U.S. Constitution calls for as a minimum. However, most people don’t realize how census information gets used.

It is not information collected just to collect data on U.S. residents. The information is used for a variety of purposes as governments determine legislative boundaries and school districts and decide where needs are, to determine the spending of money from various programs. Nonprofit organizations often use census data to support their needs when writing grants. Corporations use the data to determine where to locate new businesses. The federal government uses census data to determine where approximately $675 billion in federal program spending will go.

“The more accurate the census is, the more funding we can get, and the more people we can help,” said Kim Buchanan, director of development for the Washington County Community Action Council.

The Community Action Council administers programs designed to assist people and help them out of poverty, but the programs can only help people until the funds run out. The Commission on Aging has a waiting list for the homebound senior lunch program. If the census shows the number is increasing in Washington County, the commission can get more money to serve more seniors.

“We rely on a lot of state and federal funding, and the census determines how those funds are distributed,” Buchanan said.

The Commission on Aging also has a program that offers respite services for grandparents who are raising their grandchildren. Census data is used to determine how many households in the county are in that situation, and funding is awarded to the commission based on those numbers.

For every resident not counted in the U.S. Census, it has been estimated that the local government and agencies lose $1,800 a year over 10 years. If just 1 percent of Washington County’s population is missed in the census, it will cost the county $2.7 million a year for the next 10 years.

“We are trying to get the word out that everyone counts, and everyone needs to fill out the census,” Kinzer said.

By April 1, most homes will be mailed an invitation to take part in the 2020 Census. The U.S. Constitution requires the census be taken every 10 years, and by law, you must participate. Most people receive the short form, which is just a handful of questions that can be answered by phone, by mail, or online. The census has been conducted every 10 years since 1790, but this is the first time that the census has offered an online response option.

“All residents living in the United States are required to fill out the decennial census,” said Jewel Jordan with the U.S. Census Bureau in Philadelphia.

Just as the law requires all U.S. residents, whether citizens or not, to take part in the census, the law also protects the information collected. According to the U.S. Census Bureau website, “Your answers can only be used to produce statistics – they cannot be used against you in any way. By law, all responses to U.S. Census Bureau household and business surveys are kept completely confidential.” This means that no government agency or court can use your information. It won’t be used by the sheriff’s department to locate a felon or ICE to find illegal immigrants. Income you list won’t be used in a divorce case and your name won’t be used to track down a deadbeat parent.

Getting a Complete Count

To help ensure the best count possible for the census and also that Washington County receives its share of the $675 billion, dozens of local organizations, businesses, and governments formed a Complete Count Committee last year. The group has been developing ways to reach everyone in the county and have them counted. In particular, they want to reach traditionally undercounted populations in the census: children 0-5 years old, adults 18-24 years old, veterans, non-English speaking residents, disabled residents, and seniors. Buchanan serves on the committee, and said the group received state funding it will use to try and reach those groups.

“For years, we’ve been telling people, don’t tell people anything because it could be a scam,” Olack said. “Now we are telling them the opposite.”

“We have to find alternative ways to reach those people,” Buchanan said.

If those people don’t fill out a census form, those areas could be severely undercounted.

The online census form goes live on March 12, but the official Census Day is April 1. If you haven’t submitted your census form by May, you can expect a census taker to show up at your door. The president will receive the official counts by the end of this year. By March of 2021, the states will receive the numbers that they will use to redraw their legislative districts.