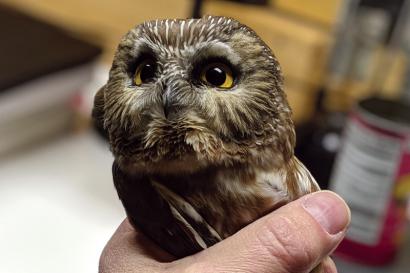 High up on the Appalachian Trail is a non-descript little hut that is key to helping scientists learn the habits of the elusive saw-whet owl. This tiniest of owls, about the size of a robin except much more stout, migrates south each fall. Saw-whet owls have several migration routes, one following the South Mountain corridor. These nocturnal creatures often fly through rural areas where they can seek cover in evergreen forests.

Late one Friday night in November, Project Owlnet volunteer Steve Huy reached gently into a small orange juice can. Gingerly, he removed the owl inside and wrapped her talons around his finger. He doesn’t wear gloves. “Their talons are sharp, but if you hold onto them properly, it doesn’t usually hurt,” he said.

The owl stared through large yellow eyes at the small group gathered around, while Huy weighed her on a digital kitchen scale. Then he spread her wings wide to measure, check the color, and body fat.

Huy wasn’t certain she’s a female, but her weight, 97 grams, indicates she is. Males are smaller, usually around 75 grams. Her wing measurements also indicate she’s a female. Her outer wing feathers are dark brown, while the inner feathers get progressively lighter, from light brown to creamy white.

Huy dimmed the lights in the hut and used a black light to get a close look at her new feathers. “They have a pink cast,” he said. Her wings indicate she’s in her second year. “They molt the first year and leave a pattern. That’s how we know it’s a second-year bird.” Adult wing feathers are dark, while juvenile feathers are lighter.

If there’s body fat under the wing, that indicates the bird is feeding well. This bird had no fat, however. She was out flying on a calm night before being caught in the mist net that allows Huy to band the mysterious birds. The previous day had been stormy, however, which likely kept her from feeding. Saw-whet owls need to eat every day in order to preserve body fat, typically feeding on small rodents.

After checking her fat level, Huy took a blood sample. Then he got his tools ready to band her leg. Huy uses round-edge pliers specially made for bird banding. He carefully put the bird head-first back into the old Donald Duck frozen orange juice can, and wrapped the tiny metal band around her leg.

Northern saw-whet owls were once thought to be rare, Huy said. But Huy partnered with wildlife professionals and other bird enthusiasts to begin Project Owlnet 25 years ago. Over the years, the 150 banding sites across North America have banded hundreds of thousands of saw-whets.

“Birders thought they were rare before we started doing this,” he said. “They don’t flush. You won’t see them. You’ve probably walked past a bunch and you wouldn’t know it.”

That, coupled with the fact that the migrating birds live in areas where there’s lots of heavy vegetation and few people, made them seem unusual.  Banding statistics show otherwise, however, Huy said.

“These are not rare,” he said. “When we started, we estimated the population at around 300,000. Now, we think the population is in the millions. They were never considered to be endangered. There’s a good healthy population.”

The name saw-whet originates from the French word for little owl. The owl Huy caught had large eyes that took in the large crowd around her. Before letting her go, Huy planned to dim the lights to give her plenty of time to adjust to darkness before she continued her journey south.

The Art of Banding

Huy is not a wildlife professional. In his day job, he’s a risk management analyst for Marriott. On weekend nights each fall, however, he leaves his family and his Frederick home for the remote outpost at Lamb’s Knoll to band owls from dusk to dawn. His interest in owls and other raptors started 45 years ago, when he was 6.

As a kid, he learned all he could about raptors and volunteered in efforts to band them. Banding’s not easy. “It takes a lot of training, a lot of dexterity,” he said. He started banding saw-whets in 1995 at Elk Neck State Park, at the head of the Chesapeake Bay, under the guidance of the Maryland Department of Natural Resources. He banded 430 saw-whets that year. Then he learned that saw-whets were being tracked in Garrett County. Another large banding effort was in Cape May, N.J.

Huy decided to set up a banding station along a mountain ridge, thinking that he might be able to attract some owls flying at higher altitudes. He chose Lamb’s Knoll, near Boonsboro, because it’s accessible via a paved road. “I figured I’d be among the owls if I got up to the ridgetops,” he said. “There’s less turbulence, and they can travel up to 170 miles overnight.”

About a quarter mile from the hut, up a rocky trail, is a string of mist nets. Thin and gossamer, they don’t hurt the birds, Huy said, but prevent captured birds from flying off. A recorded male breeding call lures the females, even though it’s not breeding season.

The haunting, plaintive call is audible to owls two miles away.  Although it’s a breeding call, it’s worked well enough over the years to allow Huy and volunteer assistants to band over 2,000 saw-whets at the Lamb’s Knoll site.

In the early years, Huy brought a sleeping bag and tarp to the site, at about 1,500 feet elevation and next to a Federal Aviation Administration tower. After a decade or so, he got a state DNR grant to build a small 12-foot by 12-foot wooden hut, complete with electricity.

It’s big enough for a banding workbench and tools, a couple of bunks, a laptop and a dorm-sized refrigerator. A heater gives the hut a cozy feel on cold, autumn nights. Temperatures are usually in the 20s or 30s, and sometimes dip into the teens. At the beginning of each owl watch, Huy painstakingly sets up the nets. Hourly he checks them and catnaps in between.

Saw-whet owls fly on dry nights, without a lot of wind. They hunker under cover in rain. Doug Inkley, a retired wildlife biologist from Rohrersville who is in training to assist Huy, explained that while saw-whets will fly in light winds, south winds often repel the birds because they don’t want to waste valuable energy.

“Females are looking for food,” Huy said. Saw-whets aren’t likely to nest in Maryland because of summer heat. Saw-whets nest in cool areas, including Pennsylvania and parts of West Virginia. Saw-whets once nested in northern Washington and Frederick counties, but the death of hemlocks in this area means there are few cool valleys for the birds to nest. Most saw-whets, however, spend the breeding season in Canada’s southern boreal forests, not far from their closest relative, the boreal owl.

Their migration habits make them a curiosity to wildlife experts. “The owls do tend to migrate to the same region, but not the same spot,” Huy said. They migrate as far south as Alabama and Arkansas, and may even reach northern Florida. Other birds journey south through the Rocky Mountains. There are even banding stations in Mexico.

Maryland has seven banding stations. Huy proudly said, “This is the best site in Maryland for banding.” In a big year, he’ll band around 400 birds. In other years, he’ll band around 150 or so. That’s because saw-whets lay more eggs in years when there’s abundant rodent food. 2019 saw a large acorn and pinecone crop, which means that this year rodents will have plenty of food and reproduce more. The more rodents, the more juvenile saw-whets.

Because of climate change, logging, and other variables, keeping records on saw-whets helps scientists chart their future. Scientists also want the public to learn about the little owl. Huy hosts bird groups, Scout groups, biology classes, and any interested group willing to drive up to the Appalachian Trail outpost on chilly autumn Friday and Saturday nights.

Huy tells the groups to arrive after 9 and to expect to stay until around midnight. Anna Hutzell, of the Washington County Bird Club, has been leading groups of bird enthusiasts to Lamb’s Knoll for many years, and said she’s always encountered at least one saw-whet. The Potomac Valley Audubon Society also organizes several visits each fall.

About 10 to 15 percent of banded owls are recaptured, giving scientists valuable information about the birds and their migration habits. Some even carry trackers, allowing scientists to follow their journeys.

All this starts with banding, and Huy is hoping to train more volunteers. “I’m looking for people who are committed to volunteering and are willing to do extensive training,” he said.

Across the country, there are nearly 150 banding stations, and most of those who do the banding are volunteer citizen-scientists. “There’s a good, healthy population now,” Huy said. “If we notice a drop in population, this will help us figure out what is happening.” Saw-whet owls may be tiny raptors, but their habits can help scientists track big changes in nature.