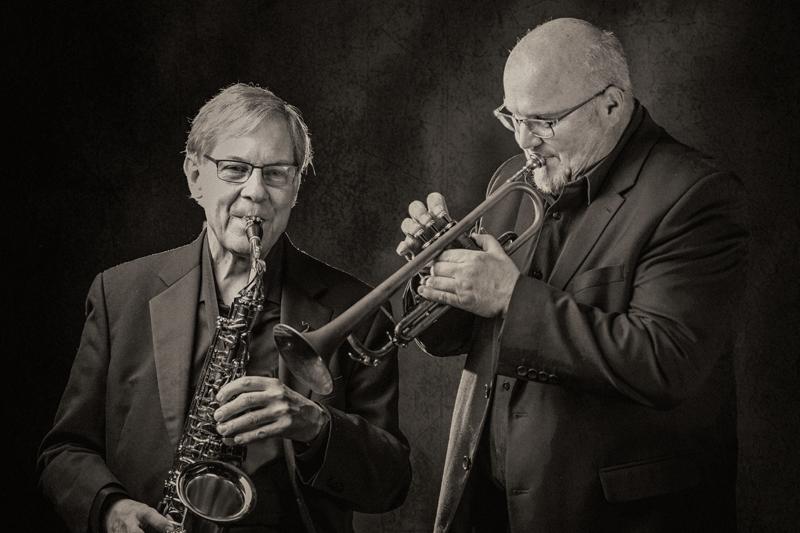 It’s Hard to Stay Seated When the Music Starts

The name remains the same. Even after Rocky Birely took over for his father in 1994, the band was still called The Ray Birely Orchestra. “I never replaced him,” says Rocky of his father, who started the band in 1962. “It is his legacy, not mine.”

And on a warm September Sunday afternoon standing in an open-air dance pavilion where his father had stood before him and where Rocky has stood for so many years since, he leads the orchestra in celebration of Everybody’s Day at Pen Mar Park in Cascade. For the past 32 years, The Ray Birely Orchestra has played at this event as part of the annual Jim and Fay Powers Music Series with its focus on dancing and live music.

The mood that day is happy and relaxed as people sit in lawn chairs or on blankets. Then there are those who take to the dance floor. Some are dressed for the occasion in attire that harkens back to a different time, from skirts that swirl as the women twirl to even a pair of graceful-stepping red and white wingtip shoes on the feet of one of the men. They waltz. They jitterbug. They dance to songs such as Moon River and Boogie Woogie Bugle Boy. And sometimes they throw back their heads and laugh from the pure joy of it all.

“You escape to a different time and place for a few hours,” says Rocky.

During a break in the music he makes an announcement. “This is the day of the 25th year of my father’s passing,” he tells the crowd. And it is only fitting that he should share this. In a museum on the park’s grounds is a nod to the rich musical culture of the area. There’s a photo of Ray Birely with his saxophone. And accompanying that photo is a framed letter from his son, praising his father’s talents and accomplishments and referring to him as “ole buddy.”

The bond is deep between the two. From his earliest days, say four or five, Rocky remembers accompanying his father, who was also a featured vocalist, as he played saxophone professionally. “I would sit between him and another musician,” says Rocky. “And, I remember saying to him, ‘Daddy, how can your fingers move so fast?’ He said to me, ‘Well, you got to practice a lot and one day you’ll be able to do that too.’”

And he was right. Rocky would go on to become an accomplished musician in his own right. Not that it was so surprising. Musical talent runs deep in the Birely family.

Ray, who grew up in Blue Ridge Summit, Pa., performed with various area big bands during the 1930s and 1940s, and the Army Air Force Band in Alaska during World War II.  After returning home from the war, he would go on to organize what would become The Ray Birely Orchestra.

It was, in fact, during World War II that he met a hero of his own—Glenn Miller.

“Dad was a sergeant in the army in Alaska and was in charge of running this finance office,” recalls Rocky. “He was an accountant by trade. Glenn Miller came through, and he met him. He was blown away. He had his pay voucher and paid him. Soon after that Glenn Miller was lost in that plane. My dad would often talk about that.” In 1942, Miller had enlisted in the U.S. Army and was assigned to lead the Army Air Force Band. Miller’s plane disappeared while flying over the English Channel.

Rocky’s uncle Fred Kepner was the chief arranger, pianist, composer, and the band leader with the Air Force Band; and was the organizer and first leader of the Airmen of Note, the official Air Force dance orchestra and successor to the Glenn Miller Army Air Force Band.

And he had connections, as Rocky recalls.

‘Somebody I want him to meet’

“One day I went to my aunt and uncle’s home to visit,” he says, referring to their home in Oxon Hill.  “My uncle had a studio downstairs, and I could hear him playing off and on. I was upstairs talking to my Aunt Doris, my father’s sister. My uncle called up and asked who was there. My aunt said, ‘Rocky’s here.’ He told her, ‘Well, send him on down. There’s somebody I want him to meet.’”

After a few moments, his uncle turned to Rocky. “He said, ‘I would like you to meet a dear friend of mine,’” recalls Rocky. “This is Hank Mancini.” Rocky admits being a bit awed by coming face to face with the famous composer who most know as Henry Mancini. “They were just having fun at the piano,” he says. “I had no idea they were friends.”

As a budding musician, Rocky took to the saxophone like his father.  “I loved it,” he says of his favored instrument. “I still do.” And, “I was a teenager in the ’60s. There was no greater time for a saxophone player than playing Motown, R&B, the music that came up in the ’60s.”

While attending high school in Thurmont, “I was asked to play in a six-piece band, called The Coachmen,” he says. And his father enthusiastically approved. “He loved it. He used to come and listen to us,” says Rocky.

Around 17 years old, Rocky joined his father’s orchestra. “I knew that it would be a big part of my life,” he says.

And it has been. Today, The Ray Birely Orchestra with its 17 musicians and two singers consists of a talented and dedicated group of musicians, according to Rocky. They come from a variety of backgrounds, from instrumental music instructors to name-band musicians to active and retired U.S. Army Jazz Ambassadors and U. S.  Navy Commodores.  Still one of the most sought-after big bands in the area, the Ray Birely Big Band plays in Baltimore, Washington D.C., mid-Maryland and Southern Pennsylvania at galas, dinner dances, wedding receptions, concerts and private parties.

And, of course, there are the performances at Pen Mar Park each summer on Everybody’s Day. “It’s one of the most popular bands we have at Pen Mar Park,” says Fay Powers. “And, Rocky is a such a wonderful person and so dedicated to what he does.”

Besides leading The Ray Birely Big Band and The Ray Birely Combo, which is associated with the orchestra, as well as being a member of The Coachmen, Rocky has been active in the area through other musical endeavors. He has played with such bands as JD and The Interns, The Bill Krantz Band, Storm Front and The Hurricane Horns, Bonedaddy Band, Inside Out, The Cool Jerks, The Shades, and East Coast Stroke.

Rocky has also played backup for The Four Tops, The Temptations, The Shangri-Las, Della Reese and even Sherri Lewis and Lambchop, among others. Often, providing backup duty meant arriving at the show’s venue early that day and learning the music quickly for that night’s performance as the performers relied on local talent from stop to stop. “It was a quick turnaround,” says Rocky, “with a thick book of music. And then you do a show.”

But Birley’s life would not be focused only on performing professionally. When he entered college where he played for the nationally acclaimed Towson University Jazz Ensemble, he was considering studying languages or math. But the pull of music was too strong. “I thought to myself, what really makes me happy?” he says. He wound up studying music education and has no regrets.

“I truly believe that I was led to that because of the joy and success I’ve had with students,” says Rocky, who taught instrumental music in elementary school, middle school and high school for 32 years before retiring. He continues to teach private lessons.

“I have been so happy to be able to have touched the lives of so many kids,” he says.

And the lessons learned by the son from his father would be passed on to Rocky’s students and a whole new generation of musicians.

“In the eighth grade I had the lead alto part in the little school jazz band, and I brought ‘Stardust’ home,” he says. “I was so proud. I had practiced and had it down. My father sat down with me. I played it for him. He just smiled and looked at me and said, ‘Very good, son. You played all the notes. Just right.’”

But “‘That’s just ink on paper,’” he told me. ‘That’s not music. Those are just symbols that you have to interpret and express with feeling. Every note must have its own personality.’ I will never forget that. I have shared that with my own students.”

Having lived a life of music, Rocky can hardly imagine a life without it.  “My music has been my joy.”

While Rocky has no intention of packing away his saxophone any time soon, he has named longtime friend and bandmate Kurt Nigh as co-director of the orchestra. “He is one of the finest human beings I have met, and a wonderful musician and arranger,” says Rocky.

And when and if there comes a time that Nigh may need to step up as Rocky did for his own father and take over the band, one thing will not change, as always. “I have told Rocky,” says Nigh, “it will always be The Ray Birely Orchestra.”

The name remains the same in honor of a father, his son, and a love of music that has touched the lives of countless people. “I have been blessed,” says Rocky, “with the people I have met, the friends I’ve made, and the experiences we’ve shared.”