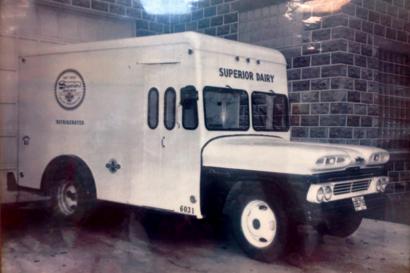 “Everyone just seems to love each other,” says Kathy Ludwick, a member of the group, who recently became a moderator of it as well. “Pat and Connie just make everyone feel so welcome.” Pat Mayhew and Connie Daley created the group last April and describe it as a “sort of cyber kitchen table” where members can pour a cup of coffee, pull up a chair, sit down at the table and enjoy a nice friendly chat.

With its focus on kindness and positivity, it has been eagerly embraced already with nearly 10,000 members. And, as one might expect, there’s plenty of reminiscing taking place on the site. A simple post asking who remembers Red’s Twin Kiss on Pennsylvania Avenue can launch a flurry of responses in the comment section.

“Best stop in high school. One of my classmates worked in the kitchen. I ordered a cheeseburger, and when I got it, first bite the burger was frozen. Great prankster.”

“Regular stopping spot for me, while out crusin.’”

“My school bus used to stop there the last day of school each year and let us get lunch!”

“(When we) went on Sunday drives, my parents would end it with a cone there. I always got the twist one.”

“Best of everything. You can’t find any place like that ever. Thank God for the good old days.”

“Grease-soaked bags of cheeseburgers, fries and fried mushrooms on a daily basis – summertime.”

“Loved those pizza burgers. It’s also where my husband proposed to me. We had 50 wonderful years together.”

For Mayhew and Daley, the group is just another way to be connected to the community they love.

“Our friends are our family,” says Mayhew.

While Daley grew up in Hagerstown, Mayhew, who is originally from Monaca, Pa., didn’t come to Hagerstown until he was 17 years old. But, no matter. He says he quickly grew to love his new home and that love has grown through the years.

Connie experienced the goodwill of the Hagerstown community early on. When she was 11 years old and walking to school she was hit by a train. “She was in the hospital for years and years and years,” says Mayhew. “But she recovered and decided to carry on her life as a person folks don’t even look at as being challenged. Around here, she is affectionately known as Miss Connie.” Adding, “The community supported her. They championed her. She is celebrated every day and everywhere we go.”

Besides being longtime best friends, the two have also been business partners, owning sub shops and video stores. By doing so, through the years they have interacted with and endeared themselves to countless community members. Mayhew remembers when he and Daly had to move their video store to another location quickly and neighbors showed up unsolicited to help load up and move the store’s contents, using their own automobiles.

“That’s special,” says Mayhew. “Without the folks around here Connie and I wouldn’t have been the people we are. We wouldn’t have had the success, or experienced the adventures we’ve had. These folks have made it possible.”

But the online connections do not stop with Our Hagerstown Tymes. Mayhew has also kept his own hometown in mind. There is an Our Monaca Tymes for the community outside of Pittsburgh, where Mayhew was born and spent his early years. Sue Hartly, also from Monaca, is a member and moderator for both groups. She says she is not surprised that Mayhew, who she knew growing up in Monaca, would choose to create such sites. “He’s a people person,” she says.

And while she is not a Hagerstownian as such, she has come to enjoy the group. “The posts are so interesting,” she says. “Especially the history of Hagerstown.”

“We learn something new every day,” says Ludwick.

“You don’t realize the richness of the world that surrounds you until you see it through someone else’s eyes,” says Mayhew. “With this group we’ve learned how families got together and got through struggles. You can take those things and apply it to all the challenges you have. And before you know it, they’re part of your life. They expand your view of your community.”

But Mayhew and Daley want to do more than just remember with the group. “We are not just preserving, we are enhancing,” says Mayhew.  “The newer generations don’t understand what wonderful experiences we had, from trick-or-treating to leaving your house open and not having to lock your car to not having to worry about your children when they go to school. We lived in that time.  What we need to do is return to those kinds of feelings to show them this is what it could be again.”

And for Mayhew that means a return to positivity. “We’re creating a movement,” says Mayhew of the group. “In this day and age, there is so much negativity on television, in the newspaper and on Facebook. Everywhere you look there is negativity. We are creating a movement that says negativity doesn’t have to be our future. Negativity can be a thing of the past. We remember when friends were like family. We all sat around our kitchen table and talked about things. We visited each other on the front porch. We’re doing that on a Facebook platform.”

The Facebook group is not the first time that Mayhew and Daley have worked to bring people together. They have long been known for hosting activities such as Christmas caroling and com-munity picnics. In fact, just this past September there was a community picnic. And folks who had met through Our Hagerstown Tymes were able to come together face-to-face, whether it be first-time meetings or reconnecting with those not seen for years.

The day was filled with potluck food, such as deviled eggs, potato salad, homemade rice pudding, and chocolate cake. And, of course, the famous Pat and Connie subs. Folks played bingo, participated in raffles and enjoyed the performances of Elvis and Patsy Cline impersonators. As people mingled about, there were comments, such as, “We’re friends on Facebook but I wanted to introduce myself to you in person. It’s so nice to meet you.”

“We were able to put faces to the names we see on the group,” says Ludwig. “People who don’t belong to groups like this don’t always under-stand the bond we have.” And soon group members will have a more permanent meeting place to gather face to face if they choose. Mayhew and Daly are opening an Our Tymes Café. While it will be open to the public, “It will also be a place for our group,” says Ludwig.

There are also plans for a senior citizen out-reach program in partnership with a local church which will be called Our Golden Tymsters, according to Mayhew.

And among all these activities, the Our Hagerstown Tymes will continue to connect individuals, including those who remained in Hagerstown and those who didn’t, and even those who just want a kind place to visit for a while. “It’s a special place,” says Ludwick.

So pull up a chair, take a seat at the table, click on the site, grab a cup of coffee and stay for a while. You are among friends and family.