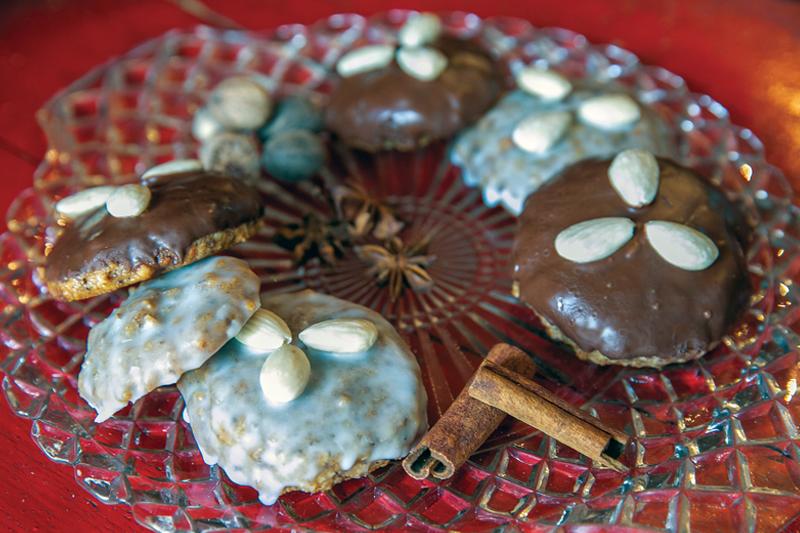 Sandra Knight is baking German tradition into each cookie for Christmas.

Sandra Knight describes Christmas in her native Germany as magical.

“It’s one thing I miss,” she said. Shopping at Christkindlmarkt, eating hot nuts, sipping gluhwein (hot mulled wine), listening to classical Christmas music and watching a Christmas parade are all memories for her.

What makes it so special in Germany is that holiday decorating doesn’t happen in October, but closer to the actual Christmas holiday — with some trees not even going up until Christmas Eve.

Knight said the German Christmas holiday begins on Christmas Eve, followed by Christmas Day, then the second day of Christmas, similar to UK’s Boxing Day, then High New Year on Jan. 6, which is when the Christmas tree comes down.

Christmas holds many memories for her; one comes from her childhood growing up in Saxony, East Germany. There, her parents and grandparents lived in the same building. That morning she’d open gifts upstairs with her parents, then her grandfather would disappear to his own place downstairs. Her grandfather would light all the candles in his home, which was decorated for the holiday and included a Nativity scene he had hand-carved himself.

“He had this Christmas tree on his desk that had real candles on it and he would light it,” she said. “It’s my favorite Christmas memory.”

Knight, who immigrated to the United States in 1995, and has made Hagerstown her home, said she’s been Americanized. However, she continues to keep the food traditions associated with her childhood Christmases alive.

One is the traditional Christmas German cookie called pfefferkuchen, which basically translates as pepper cake.

“In Germany, they call them different things,” she explained. “Pfefferkuchen, most people know them as that, but people also call them pfeffernüsse.”

Knight, who owns Little Antietam Cakery, said the cookies are basically spice cakes, although pfeffernüsse are usually smaller in size and coated in a sugar glaze. The pfefferkuchen, which is a larger cookie, are often coated in chocolate or decorated with half almonds in patterns.

“They are really sticky and are put on like communion wafers so they don’t stick to anything,” she said. Knight said in Nuremberg, Germany, they are called Elisenlebkuchen.

“Nuremberg is really famous for them and they have a gigantic Christmas market and you can buy them there,” she said.

The cookies, she said, are made with hazelnut meal, almond meal, and dried fruits.

“I know a lot of people don’t like dried fruits, but you chop them up as a coarse meal almost,” she said. “And then you have the spices like cinnamon, cloves, allspice, and black pepper.”

The other name the cookie goes by in some parts of Germany is lebkuchen. At Nuremberg,  lebkuchen are in heart shapes.

“They’re like our gingerbread, but they’re hard as a rock,” she said.

Knight said she remembers her mother making the cookies. In November, the family would gather to make a variety of sweets and breads in preparation for Chrismas.

One of those cookies was the pfefferkuchen that is usually only made for Christmas. But after a weekend of baking, there is a long wait before anyone can actually take a bite out of the cookie.

“You want to make those guys in November and stick them in an airtight container and let them sit for three to four weeks,” she said. “When the first of Advent comes around, you can open the tin and eat them.”

Knight said when they’re revealed they’re “so soft and so good.”