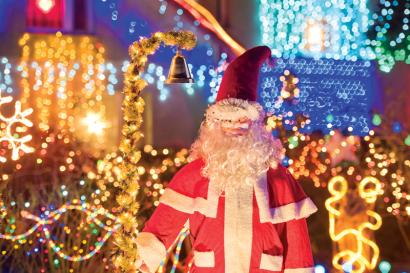 Holiday lights without the hassle

Growing up, Ronald Layman recalls his parents just wanting a nice indoor Christmas tree for decorations. He had other ideas.

“I would go down to the store with money I made all summer long and start buying Christmas lights and stringing them up all over the place,” he recalls. “…I drove my parents crazy. Back then, there were no LEDs so the electric bill shot up through the roof. That time of year, you have to make everything magical because you only have so many Christmases in a lifetime.”

A decorative painter and muralist for commercial and residential properties, Layman was looking for ideas to bring in income when business got slow during the cold, winter months in 2006. A friend who works out West told him about hanging Christmas lights and putting together interior and exterior holiday displays.

“I said ‘What do I have to lose?’ so I gave it a shot,” he says. “Now I have more work than I can imagine.” In 2007, he founded The King of Christmas which is a name he came up with after a night of brainstorming.

Based in Frederick, Layman notes their service area is everywhere. He has crews go to the Eastern Shore, northern Virginia, Baltimore, Pennsylvania, and Washington, D.C. He also receives calls from all over the country including Richmond, Va. and Houston, Texas. If clients are willing to pay, he will go. “There is something about the name ‘King of Christmas,’” he says. “Anybody can hang Christmas lights, but they want to have the King of Christmas do it.”

As schedules get more complex and packed, many area residents don’t have time to put up and take down elaborate annual holiday displays. Others have been injured while trying to hang lights through ladder collapses or high falls. So instead of having your abode look like where Ebenezer Scrooge calls home, many people are recruiting companies to create magical, festive displays.

We Do Christmas Lights became an offshoot of Complete Power Wash, an exterior cleaning homes and businesses company owned by Tim and Sandy Fields. A couple years ago, friends in the industry had branched out into Christmas lighting and encouraged them to do so as well. Their service area is Washington County, Berkeley County, W.Va., and Franklin County, Pa.

“Christmas lights are fun,” Sandy Fields says. “People wash their houses because they are dirty and need it, but lights are fun. It is just such a warm time of year for a lot of people.”

The Hagerstown-based business does not hang or repair customers’ lights. They bring their own LEDs and custom cut the strings and extension cords to fit each client’s home or business. They will also repair lights if they go out during the season. After presents have been unwrapped, the company will take down the lights, clean them, and put them into storage marked with clients’ names so they are ready to go for next season. The company does only exteriors at this time, including roof lines, porches, and some landscaping.

“It is a very busy time of year for people, and (having a company to put up lights) is one thing they can get off their plate so they can focus on other things that are important to them for the season,” says Sandy Fields. “…The best part is seeing the finished product. It is so exciting. We will go out and take a drive and ride around to look at the lights that have been put up. …It is just so nice to see the finished product and the customers are so happy.”

By the beginning of December, the company is usually pretty booked. “Sometimes people will think, ‘Well, I can get a better price if I wait longer,’ but the reverse is actually the case,” Sandy Fields says noting the company offers discounts for early fall installations.

Layman meets with clients first to discuss what type of style they are looking for with their displays, including fun, elegant, classic, and modern. He also puts together themes such as the Grinch tearing off lights to Peanuts to a Winter Wonderland. He has decorated homes for professional football players for the Baltimore Ravens and Washington Redskins, and usually does their team colors in lights. Interior decoration is also popular, with the company providing live or fake trees, decorated or bare, as well as adding adornments to handrails and other areas.

Layman provides all the decorations which he houses in a 5,000-square-foot building filled with millions of lights and props such as life-size toy soldiers, giant candy canes, and Santa Claus thrones. “We talk about budget and putting something together that works for their budget,” Layman says. “…We can do things to people’s houses that would probably take them weeks to do in a matter of days.”

Lights begin to be hung beginning in early September, and Layman notes people in his warehouse pretty much work year-round getting decorations ready for the holiday season. “I just like seeing people be happy,” he says. “When the job is finished, they get to have that magical Christmas moment.”