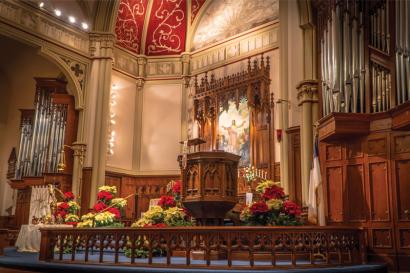 When walking or driving through Hagerstown, look up. You will see multiple church spires rising to the sky. Most people do not notice this, engaged in their own private world, but once the idea is suggested, they will see them.

They represent different faiths, different styles of architecture, different dates of construction. Some have accompanying cemeteries, others, reflective of current necessity, parking lots. All represent a degree of dignity and devotion to their respective faiths.

These houses of worship, most established by the early settlers in Hagerstown, lend a special magic to the city that will be revealed during the annual Historic Houses of Worship Tour on Dec. 26 from 3 to 7 p.m.

This event, originally started by St. John’s Episcopal Church who coordinated it for the first four years, is now an ongoing, end-of-year event, leadership of which rotates among the churches, according to Kathy Powderly, executive director of the Hagerstown Area Religious Council. Heading up this year’s event is St. Mark’s Lutheran Church on Washington Avenue.

In addition to the 13 churches, Miller House, headquarters of the Washington County Historical Society, is also included.

Many of these houses of worship are not only recognized for their early origins, but also for their architectural, musical, and art features. Among them are several Tiffany windows, organs by local maker Moller, and other distinctive features, such as reredos, defined as a wood or stone sculpture that serves as a partition behind the altar. It’s a design feature that dates back to the 14th century.

These churches also serve not only as religious institutions, but also as evidence of how Hagerstown was formed, when it was originally Elizabethtown.

A prime example is the Zion Reformed United Church of Christ. Situated on North Potomac Street, it was the first church within the city limits, founded in 1770 and is the oldest building in the city still being used as a church.

The founding of several churches came from the east, where the mountains of Frederick (although not that high) originally served as a barrier to westward expansion. But, as traders and merchants came looking for new opportunities, churches and even synagogues soon followed to bring the comforts of their religion to the then small resident community.

Several of these churches were founded even before Jonathan Hager arrived. St. John’s Episcopal Church (originally beautifully named the Chapel of the Woods), opened on Mulberry Street. The original cemetery is still located there.

St. John’s also contains several artistic elements including stained glass Tiffany windows and a Moller organ. The reredos and communion table were carved by Swiss woodworkers in the Black Forest of Germany and first brought to this country to be displayed at the 1893 Columbian Exposition.

In an early display of ecumenism, several congregations shared quarters before individual sects erected their own religious houses.

The Presbyterian Church and the Jewish community of the Congregation B’Nai Abraham met in the same place. As the history of the latter notes: “This is a very early example of the interfaith cooperation that has long been a hallmark of this community.”

Nor was this the only instance of collaboration between religious groups. In the mid-19th century, the Presbyterians also worshipped at the German Reformed Church for several years until they built their own church in a limestone Gothic Revival style.

(During the tour, music will be performed in the sanctuary of the Presbyterian Church.)

But this tour is not so serious that visitors must speak in hushed voices.

Weather permitting, the Washington Square United Methodist Church will again present a live nativity scene during the tour, complete with a live donkey named Caroline. She, however, has the usual balking nature, and is not particularly thrilled about being carried up the steps of the church and loaded onto the elevator, said Dottie Crawford, of United Methodist.

Each church on the tour has its own distinctive characteristics—and its own memories. One of the most touching is located in the Washington Square United Methodist Church. It is a plaque featuring the World War I Honor Roll. It was placed there in memory of “the Boys of Washington Square M.E. Sunday School” who served in the Great War, April 6, 1917 to November 11, 1918.”  It lists the names of the young men who died fighting in Europe.

Each one of these 13 churches is different both in architecture and worship, but all are united in their purpose and readiness to meet the needs of their congregations and invite newcomers.

Last year’s tour attracted a broad variety of visitors, with some churches receiving up to 400 people, said Pat Kelley, tour coordinator. There is no admission fee for the general public. Nor is there a starting point, and those attending can choose where they wish to start and which churches they want to visit.

The local garden club donates original flower arrangements, and the photo contest winner from last year’s tour is announced. The photo chosen is used in promotional materials for next year’s tour.

By the way, if you see Caroline, the donkey, give her a gentle pat or a scratch behind the ear to thank her for her generous, if not always cheerful, participation.