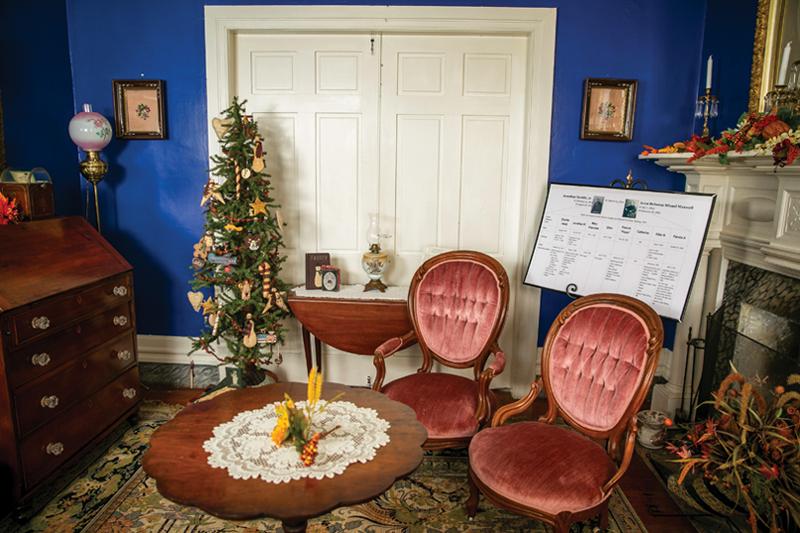 This is the scene each December at Plumb Grove, the Clear Spring farmhouse that opens to the public periodically. A Currier and Ives Christmas, on Saturday, Dec. 14 this year, takes visitors back to 19th-century Christmas celebrations, when Christmas focused on warmth, food, family, friends and a celebration of the harvests that kept this part of Maryland thriving from year to year.

A Currier and Ives Christmas at Plumb Grove is boughs of holly, brought in from the nearby woods. It’s the pine cone decorations. It’s a freshly-cut Christmas tree. It’s the odor of cedar burning in the fireplace. It’s the sound of sleigh bells jingling on the kitchen door. It’s oil lanterns that bathe the brick home in soft light against the winter darkness all around.

Clear Spring, with its bucolic rolling farmland and numerous historical houses, looks like a page out of a Currier and Ives catalog. In the mid-1980s, the Clear Spring Historical Society began opening their house, Plumb Grove, to visitors each December. Volunteers dressed in 19th century-style clothing serve as guides.

The Maryland Cracker Barrel Magazine, the quarterly publication that focuses on Washington County heritage, dubbed the celebration A Currier and Ives Christmas. The homespun Christmas celebration has been known this way ever since.

From the picket fence to the natural wreath on the front door and pine and cedar greenery throughout the house, visitors will feel as though they’ve been transformed to an earlier time. Plumb Grove is an example of farm life in Washington County, especially the life of Jonathan Nesbitt Jr., his wife Anne, their seven children, and the seven enslaved people who served them.

Plumb Grove was named for the plum trees that grew on the 200-acre farm. “Plum was sometimes spelled ‘plumb,’” said David Wiles, president of the Clear Spring Historical Society, which has the job of caring for Plumb Grove. These weren’t the sugar-plums made famous by Clement Clarke Moore’s “A Visit From St. Nicholas,” however. Moore’s sugar-plums are actually hardened candy, about the same size as the sweet little fruits.

Plumb Grove’s plum trees helped to bring the Nesbitts their wealth. The family, aided by their enslaved workers, grew plums to ship via the new Chesapeake & Ohio Canal to Washington, D.C.

The C&O Canal came to Washington County shortly after Plumb Grove was built in 1831, and the new market helped the family become one of the wealthiest in this picturesque village west of Hagerstown.

Nesbitt was more than a wealthy farmer. He was a state delegate. He received visitors in his small office in front of his elegant farmhouse. Opposite Nesbitt’s office is where the freshly-cut Christmas tree stands. This room at the front of the grand farmhouse is called the withdrawing room. Later shortened to drawing room, the withdrawing room was called this because gentlemen would withdraw to the formal room after dinner to smoke cigars and discuss the affairs of the day.

Besides the grand tree in the withdrawing room, the house is decorated with several smaller Christmas trees, all bearing sweets, dried fruits, homemade decorations and tiny gifts, in keeping with the times. Unlike many of the families in 19th century Washington County, the Nesbitts had Anglo-Irish heritage, not German. By the mid-19th century, however, the celebration of Christmas began to include German-style traditions, including Christmas trees, in America and the British Isles.

The Nesbitts had ties to Clear Spring dating back to 1754. Nathaniel Nesbitt left Northern Ireland and bought 105 acres of land in the Clear Spring area. There, Nathaniel farmed each summer, but he would return to his home in Lancaster, Pennsylvania, each winter. Nathaniel gradually added to his land holdings and eventually owned 696 acres.

His son Jonathan Sr. built a home at what is now the corner of Broadfording Road and Mill Street between 1803 and 1813. That home has been restored, and today can be seen from the front yard of Plumb Grove. Jonathan Nesbitt Sr. gave Jonathan Jr. 200 acres and in 1831, before Jonathan Jr. was married, enslaved workers built the two-story Greek Revival brick farmhouse that is now known as Plumb Grove.

The house stands on level ground near a stream that flows through the neighboring Claude E. Kitchens Outdoor School at Fairview. In the front yard is a large vegetable garden filled with heirloom plants common in 19th century Washington County. This garden would have fed the family members and slaves for the entire year. Even in December, when most of the garden had died back, some winter squashes and greens would be harvested to preserve for as long as they would last. Head gardener Pat Violet said the family buried squash in straw to save and eat through the long, cold winters.

Fruits were kept in cold storage to be eaten throughout winter. The fruit-bedecked wreaths now commonly thought of as a symbol of earlier times really became popular in early 20th century Williamsburg, Virginia. English 19th-century custom did call for greenery in the house during the Christmas season, however, along with a sprig of mistletoe.

Plumb Grove opens to the public once a month from May to October, and again for the Currier and Ives event. Plumb Grove is a testament to its volunteers. Volunteers, all members of the Clear Spring Historical Association, keep the nearly 200-year-old house looking much as it did in the mid-19th century, raising the money to fund its repairs and doing most of the maintenance themselves.

The Clear Spring Historical Association obtained Plumb Grove in 1981 from the Washington County Board of Education. After Jonathan Jr. and Anne Nesbitt died in the late 19th century, the house was rented to tenants. The estate was sold to the school board in the 1950s. Today, Clear Spring’s elementary, middle, and high schools occupy the old Nesbitt farmland.

The house was unoccupied for about 15 years, until it was deeded to the historical organization in 1981. Once the group took over the house and one acre of ground surrounding it, members got to work cleaning, painting, and restoring the formerly elegant home. On the outside, windowpanes were missing and shutters dangled. The roof had holes, and water leaked into the house.

The elegant front staircase lay in pieces. Paint peeled. Dust, dirt, and grime accumulated. The house deterior-ated from years of neglect. The walls and wood trim survived, however. The plaster was repaired. Volunteers cleaned and repainted the walls and brought them back to life. A new cedar shake roof was added. Exterior bricks were repointed. The historical association spent about $100,000 to restore the house. In 2011, it was listed on the National Register of Historic Places.

Today, all the fireplaces work, and three fires will be roaring on the day of the tour. The walls are painted in historical colors. The baseboards still bear the marbleized pattern that distinguished the trim in the 19th century.

The house is furnished with 19th-century furniture, some of it made in Clear Spring, all of it made in Maryland. Teardrop candlesticks adorn the mantels and hurricane globes along with coal oil lanterns light the house. Nineteenth-century quilts adorn the antique beds, and a special Christmas quilt will hang during the Currier and Ives celebration. The massive dining room corner cabinet holds rare 19th-century china. A small sitting room where the family would have gathered in the evening has a Moller pump organ, made in Hagerstown, and games the family may have played.

The kitchen still has the original cooking fireplace, along with a cast-iron warming oven that kept food warm or reheated it, much like a microwave oven today, Wiles said. Pie safes, a spinning wheel, a work table, a wooden sugar pail, ceramic crocks, and canned vegetables depict a typical 19th-century kitchen. Back stairs from the kitchen lead to quarters where the enslaved servants lived. These tiny, dark, cramped rooms were home to the house servants. Those who worked the fields lived in log cabins east of the house that have been lost to history.

The house never had plumbing, and electricity was minimal, Wiles said. In the yard, a five-seater outhouse toilet was found, and the historical association re-created it. Also outdoors is a re-created smoke house and a modern barn where cookies, hot cider, and hot chocolate are served during the holiday event.

After Christmas, the house is locked up for the winter, only to come back to life each spring, surrounded by flowers and newly green trees.