The Barns of Antietam 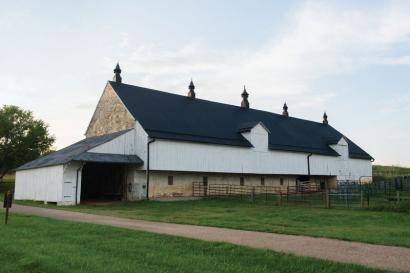 Lovingly restored and rehabilitated 157 years after the bloody Battle of Antietam.

by Karen Gardner and photos by Turner Photography Studio

Like witnesses standing sentry, the barns spread across Antietam National Battlefield rise up from the corn and soybean fields that make up the 3,000-acre national park in Sharpsburg. Now the barns are being preserved, giving visitors a glimpse into 19th-century farm life as well as a look at buildings that played a key role in nursing surviving soldiers back to health.

The Battle of Antietam was the bloodiest one-day battle ever for American troops, with 23,000 killed, wounded, and missing on Sept. 17, 1862. Many of the 15,000 wounded soldiers were treated initially in these and other barns that surround the town of Sharpsburg.

The large, airy, well-ventilated bank barns made for ideal hospitals under trying circumstances. Hundreds of soldiers could be treated in some of the largest barns, and they didn’t need to travel far to get care. Nearly every barn, along with churches and some homes, functioned as hospitals for months after the battle.

For the past 20 years or so, National Park Service staff at Antietam have been restoring the barns, repairing and rehabilitating what they can save, and replacing what they can’t. The park restored the Poffenberger Barn in the early 2000s. More recently, the park has restored the Newcomer and Parks barns, and the Roulette barn should be completed next spring.

The barns tell a story, not only of the battle, but of the farm families who lived there before and after. They tell a story of 19th century agriculture and a way of life that has largely disappeared.

The Antietam barns are forebay Pennsylvania bank barns. Built by German and Swiss settlers in the mid-Atlantic states in the 19th century, the barns have a recessed stable wall on the first level, while the main barn level extends above the stable wall by about 8 to 10 feet. The stable wall, typically built of stone, is called a forebay. Four bays, or openings, are cut into the stone.

Work on the Newcomer Barn began about 2014, said Doug Gaylor, who worked with fellow NPS staffers Travis Divelbiss and Andrew Michael to restore the Newcomer and Parks barns. “Each barn has their own details that make them stand out,” said Ben Wagner, chief of facilities. The Newcomer Barn, built in 1831, is the largest barn on the battlefield, and one of the tallest. It stands out to drivers who pass it on Md. 34 east of Sharpsburg. The barn overlooks Antietam Creek.

The NPS acquired the Newcomer Barn in 2003. Before work could begin, the building needed to be assessed and stabilized. Funding shortages meant restoration couldn’t begin until 2014. “We were jumping back and forth between several jobs,” Gaylor said.

The barn’s original ground-level stone wall was crumbling. Gaylor photographed and numbered each stone so they could be reassembled in the right order. Clay Elliott, of the NPS staff at Antietam, did much of the masonry work, aided by Jason Runk and Patrick Godwin. They repeated this process in restoring the Parks Barn.

New stable doors were made for the Newcomer Barn, along with strap hinges and pintle bolts made to look as though they were forged. “We had to replace all the posts and sills in the barn,” Gaylor said. Those also had to be replaced in the other barns. The thick-beamed wooden sills and posts sit on the old stone foundation, which caused them to rot.

The 95-foot by 48-foot barn is the battlefield’s largest, with the exception of the Pry Barn in Keedysville. It also has the steepest roof pitch, Gaylor said. The exterior siding was replaced with similar white oak. Half the floor joists were re-placed, and 60 percent of the rafters. The barn doors to the upper floor were replaced with quarter-sawn oak, which keeps the wood fibers straight and strengthens the doors. A new shingled roof was built.

“Everything we did went back to the original,” Gaylor said. In a few months, the barn will be whitewashed.

This 65-foot by 48-foot barn sits along the Three Farms Trail a quarter-mile from Md. 34. Sometimes called the Cunningham Barn for the last family to live on the farm, the whitewashed barn also has new siding, many new floor joists, new barn doors and new rafters.

The forebay wall and stone foundation walls got new mortar. Part of the original stone wall had been removed, and it was restored with stone from a Keedysville barn. The barn’s load-bearing summer beam was salvaged. Signs of its use as a dairy barn remain.

The 90-foot by 40-foot Roulette Barn, built about 1855, has outsheds on either side of the barn’s main floor entrance. The barn was built with wood recycled from late 18th-century farm buildings. The stable level has a mix of old posts and metal posts, added probably in the 1940s. The older posts are being preserved with new sections added where the bottoms rotted.

Concrete block walls, stanchions, and a grain bin remain from the barn’s mid-20th century role as a dairy barn. If Antietam ever opens the barns for tours, they will give a picture of Washington County farm life through the ages.