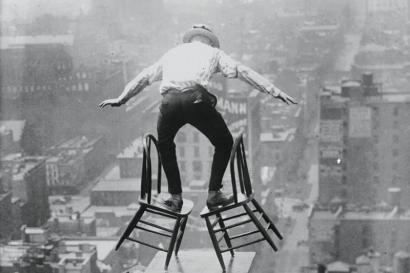 Getting to the top the hard way.

by James Rada Jr. and photos by Turner Photography Studio

Men helped George Oakley into a straightjacket and secured his arms behind the 36-year-old man on the evening of Aug. 25, 1924. The men tied a rope around Oakley’s feet, and with a signal, a winch lifted Oakley upside down to the top of the 6 1/2-story First National Bank Building. Then hanging from a car tire inner tube, Oakley freed himself from the straightjacket, climbed down the side of the building and then back up to the roof “Going up the outside wall of the First National Bank Building with the ease of an ordinary mortal climbing the steps inside…,” according to the Hagerstown Morning Herald.

Before this gravity-defying feat, the daredevil had stood on his head on the front bumper of a Chrysler with four-wheel brakes. The car drove along the street at 10 mph with Oakley appearing as an upside-down figurehead on the car. The car braked, throwing Oakley into the air. He turned a somersault before landing on his feet.

“The reliability of 4-wheel brakes was amply demonstrated when the car came to a halt before touching Oakley, but he also managed to show that he is totally deficient in the quality of fear,” the Morning Herald reported.

George Oakley was a rare breed of daredevils called “Human Spiders” during the first half of the 20th century. These men traveled the country climb-ing tall buildings and performing other tricks for amazed audiences. The Human Spider and the sponsoring organization split the money collected from the spectators. During this performance, Oakley earned $22 for the Lions Club Milk Fund.

It was an adventurous life and a dangerous one.

A week after his Hagerstown appearance, Oakley was dead. While climbing Chambersburg Trust building in Chambersburg, Pa., using only a cane and an inner tube, the tube snapped and Oakley fell three stories to the ground. An examination at Chambersburg Hospital showed that Oakley had several broken bones including lower vertebrae, his pelvis, ribs, left arm, and his breast bone, with many of the bones being broken in multiple places. According to The Franklin Repository, his “nervous system suffering much from shock.” He suffered for hours before dying from his injuries the next day.

This sense of danger made the climbs exciting for spectators. They never knew whether they were watching an unbelievable act of daring and skill or a man committing suicide. Whether such stunts should be allowed was a headache for local governments that issued permits for such climbs. Hagerstown, as well as many other cities, had legislation against such stunts, but often ignored them to help a good cause.

Oakley’s death scared Hagerstown officials enough that they started enforcing the city ordinance. When Henry Rowlands wanted to climb either the Dagmar Hotel or First National Bank Building in 1926, the city denied him a permit.

Twenty years later, the Hagerstown government was willing to let things slide once again when Johnny Woods climbed the eight-story Dagmar Hotel for two shows on May 24, 1946. He was successful, and audience collections helped the William D. Byron VFW Post raise money for a new VFW building and the rehabilitation of hospitalized soldiers.

The climb was not much of a challenge to a man who had climbed the 42-story L.C. Smith building in Seattle, the 25-story Hotel Pittsburgher in Pittsburgh, the Hearst Tower in Baltimore, and the Tribune Tower in Chicago, among others. However, it was a thrilling spectacle for local residents to witness in person.

Two other Human Flies are known to have performed in Hagerstown. Williams climbed the Dagmar Hotel in 1916. “Only a small cane was used in climbing from the windows of one story to another until he reached the fifth floor where it was necessary to muster a rope in service in order to ascent the cornice which extends a distance of four feet from the main building,” the Morning Herald reported.

He returned in 1922 to climb the First National Bank building using only his bare hands.

In 1917, Johnny Reynolds climbed the Costello Building on South Potomac Street. “He did all kinds of tricks on the side of the building and when he got to the top, he took four tables and chairs and performed marvelous tricks,” the Morning Herald reported.

Reynolds was 28 years old at the time and had been climbing for half of his life. He had even scaled 543 feet up the side of the Philadelphia City Hall.

Although many of the famous Human Flies were active in the first couple decades of the 20th century, Human Fly John Ciampa climbed buildings in the 1940s and early 1950s, Human Fly George Willig climbed the World Trade Center in 1977, and Human Fly Rick Rojatt was a stunt rider in the 1970s. While daredevil stunts still attract attention, they have become increasingly more dangerous. In 2014, Alan Eustace jumped from a spacecraft in space and fell 25.75 miles safely to earth using only a parachute to slow his descent.