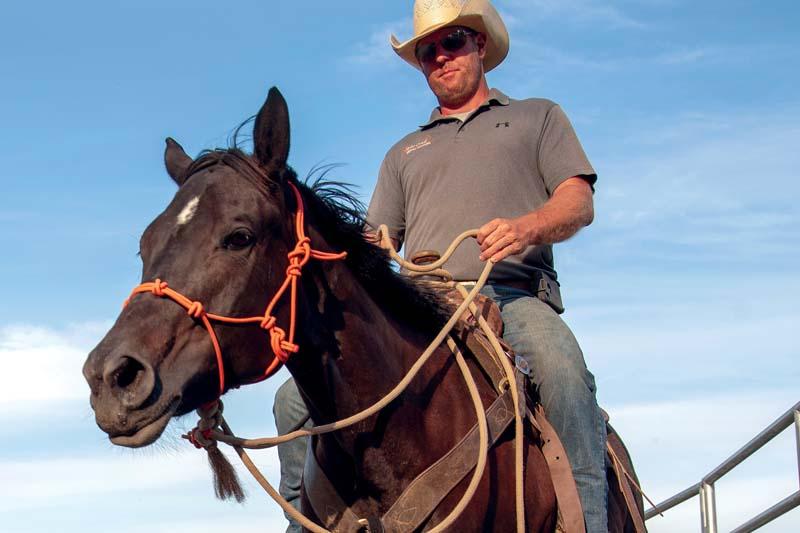 How one man’s passion is helping spread the positive word on horse adoption.

For some young boys, baseball, football or soccer is their after-school activity. For others, lacrosse or ice hockey is their sport of choice. But for a young Jeff Michael of Clear Springs, horses were his passion. He trained his first pony when he was 7 years old, a sorrel Chincoteague stallion with a flaxen mane called Sinbad.

“My dad bought him at a local auction,” Michael recalls. “After he kept bucking my cousin off, I said I wanted to train him. Boy, was he ornery. We lived on a hill and below was a creek with a flat stretch and two willow trees. When he got going, the only way I could get off was to ride him under the willow trees, grab onto the branches, and kick my legs up. Sinbad would gallop off and I’d go have lunch. By the time I was done, he was tired and I could catch him. He turned into a nice little pony.”

This wasn’t Michael’s last “nice little pony.” Since that day, he’s gone on to train many nice horses, including two very special rescue horses named Freedom and RPM, short for “Rescued Performance Machine.” Both horses were part of the Pennsylvania Horse World Expo’s Annual Rescued to Stardom training challenge — a test that pairs a regional horse trainer with a regional rescue organization. Each rescue provides its trainer with an unbroken/untrained horse, and the trainer has 90 days to train the horse, all of whom are available for adoption after the event. Michael and his rescue partner — Omega Horse Rescue — won the inaugural event in 2018 with Freedom and again this year with RPM.

While Michael grew up riding, he pursued other non-equine-related opportunities in college. But it didn’t take him long to realize that life without horses was making him miserable. He began working with a trainer in Delaware who gave him the chance to attend a clinic with internationally-known horse trainer Chris Cox. “I remember that I had a bachelor party to go to,” says Michael. “But after seeing Chris the first day, I decided to skip the party, sleep in my car and stay for the second day of the clinic.”

During the question-and-answer session on Day 2, Cox took extra time to chat with Michael and ended up being a huge influence — along with many other trainers — on where Michael is today. Now, 17 years later, he is the owner of Split Creek Equine Solutions in Hagerstown, and a trusted horseman in the community. He works with horses of all types, but has a special place in his heart for horses who need a second chance, including horses from Kelly Smith’s Omega Horse Rescue in Airville, Pa.

It’s Smith who approached Michael in 2017 with the idea of entering the Rescued to Stardom challenge. In fact, she had adopted a paint mare she saved from a local kill pen — a holding place for horses headed to slaughter in Mexico or Canada. Unfortunately, that horse had to be humanely euthanized, leaving Smith and Michael in need of another horse. The next horse — also rescued from the kill pen — was a 6-year-old paint gelding they named Freedom.

Having lost the first horse set Michael back a few weeks. Instead of having the full 90 days to prepare for the challenge, he only had 68 days, and it took a good month before he could even introduce a saddle to the little horse. “There is a lot of trauma from the kill pens,” says Michael. “These horses are usually in a state of survival and very reactive to things. Freedom would try too hard when I asked him to do something, so I needed to slow down so he could learn to do things correctly.”

Freedom came around and went on to win the 2018 competition and was later adopted by Lisa Merlo who uses him as a trail horse. “I first saw Freedom’s picture in an article about the competition,” says Merlo. “I took the picture to my friends and said, ‘call me crazy, but this is my horse.’” Today, Merlo and Freedom do overnight trail rides and she’s considering entering some trail com-petitions under Michael’s guidance. “I just love that horse with all my heart and I would have never found him if it wasn’t for Jeff and Omega Horse Rescue.”

In 2011, the Government Accountability Office estimated that 138,000 horses were sent to slaughter. These horses ended up there for various reasons — most of which don’t include them being rogue or untrainable. “There is a stigma out there that horses who go to slaughter are bad,” says Michael. “But there are a lot of good horses who, with professional training, can be family horses. I encourage people who want a good trail horse to look toward rescues. You can find good competition horses at the rescues, too.”

RPM, the horse Michael won the Rescued to Stardom challenge with this January, is another good example of a horse who was bound for slaughter turning into a confident and athletic partner. Saved from the kill pen as an 8-year-old stallion (later gelded), RPM had a wild look in his eye when Michael first saw him. “He had a cockiness about him and I thought, that’s my horse. Although he didn’t want to be touched at first, and was pushy and aggressive, he ended up coming around. He was like a sponge taking things in and learning quicker under saddle than Freedom.” After the competition, Michael’s client adopted RPM and keeps him at Split Creek where he continues to train with Michael while doing some roping and trail riding.

Denise Parsons, president of Equestrian Promotions, Inc. and the person behind the Rescued to Stardom challenge, says the focus of this program is not on winning. “The focus is on the horses and trainers who can help them. What we hope to do is educate people and help them understand that rescue horses aren’t defective. They aren’t broken or bad. They are just normal horses who humans have not done right by.”

Parsons hopes that through the annual challenge, they can highlight the rescue organi-zations and trainers who are helping rehabilitate these horses. “A ‘rescue’ is not a noun. It is not a breed. It is what has been done for this horse,” she says. “Once a horse is rescued, he is no longer a rescue. He is a horse.”

When asked why he did the Rescue to Stardom challenge, Michael says, “Sure, it was a little bit of showing off, but I also want to show people what horses can do with just 90 days of training. I want people who are having problems with their horses to know that there is help out there and that with patience and dedication, the horse-human partnership can be so strong.

“It’s popular to rescue dogs and cats,” Michael continues. “But we need to think about horses, too. When you send a horse to auction, you’re not giving that horse a chance. It’s a complex situation and I hope to bring education to people who have horses and need help rehoming them or changing their situation. I think this competition can do that. After all, it’s hard to deny its popularity when I get a call from Switzerland asking about RPM, the little horse from Western Maryland who made the news in New York.”

For more information about the Rescue to Stardom challenge, visit them on Facebook or at www.horseworldexpo.com. To reach Jeff Michael, email  splitcreekequinesolutions@gmail.com