A Family for Jack 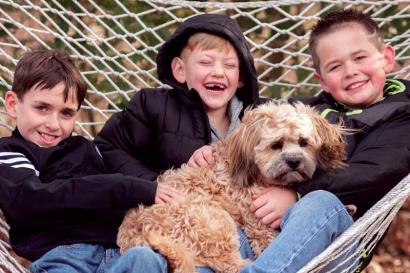 The story of one dog’s rescue from a dog meat farm in Korea.

The little dog had never had the chance to play. But he certainly wanted to give it a try.

When offered a toy and the chance to play with it and the human offering it, he seemed unsure, stepping up to the person with the toy, timidly pawing at the toy, then backing away, repeatedly.

“He was interested, but to be honest with you, I don’t think he knew what a toy was,” says Kim Jones, a director of operations for the Humane Society of Washington County (HSWC). “He wanted to engage but didn’t really know how.”

The little dog, a Lhasa Apso mix who would go on to be named Jack, had arrived at the shelter from a dog meat farm in South Korea where he and more than 200 dogs had recently been rescued by Humane Society International (HSI).

“Most of these dogs have spent their lives in cruelty,” says Morgan Miller, who works for HSI and was there when Jack and the others were rescued. “They’ve never been hugged or gotten to run around or chase a ball.”

But all that was about to change. Jack, along with another adult dog and six puppies, was placed with HSWC through the Humane Society of the United States’ Shelter and Rescue Partner program. Besides the United States and more specifically Washington County, dogs were also sent to Canada, the United Kingdom and the Netherlands. Once at HSWC the eight dogs were introduced to a new life where calm voices and gentle hands cared for them.

“When they first arrived, they were absolutely terrified,” says Crista Kowalski, a canine health and behavior coordinator with HSWC. “They weren’t used to being cared for or having human contact.”

But Jack, out of all of them, seemed to be the one most up for the challenge. Miller knew the moment she met him on the dog meat farm in South Korea that he would be “family ready,” if given the chance. “He seemed so happy to be rescued,” says Miller, an email marketing strategist for HSI, of the friendly little dog with the constantly wagging tail.

And understandably so. On the dog meat farm Jack was kept out-side in a cramped wire cage, among rows and rows of dogs in cages. His thick fur was matted, and he smell-ed of rotting feces, an odor that permeated the air, says Miller. But despite all that, he was wagging his tail and pawing at Miller through the wires of his cage. “He was so sweet. So full of love,” she says.

Upon leaving South Korea, Jack travelled with Miller. And he proved to be quite the trooper.

“A lot of the dogs on the car ride to the airport were scared and had gotten sick and threw up or peed,” recalled Morgan.

But not Jack. “I looked in on him and his whole cage was clean,” says Miller. “He was just sitting there wagging his tail. He was ready to go.” Adding, “He was so engaging with everyone who came up checking on him. He was wagging his tail and loving life.”

The little dog made such an impression on Miller that she would continue to follow his progress once he arrived at HSWC. She had high hopes for Jack and his future now that he was safe and would not be, as Jones put it, “someone’s dinner.”

According to HSI, there are an estimated 2 million dogs being kept on dog meat farms through-out South Korea, which is the only country known to farm dogs for human consumption. All breeds and all sizes of dogs, including Labrador retrievers, collies and poodles, among many, many others, can be found on the farms. And, the dogs are usually slaughtered by electrocution or hanging.

But help is on the way. Jack and the other dogs were res-cued through an HSI program which works to close dog meat farms and then help the farmers transition to a more profitable and humane livelihood. The farmer who owned the dog meat farm where Jack was kept is expanding his medicinal herb farm instead. Since it began in 2015, the program has closed more than a dozen dog meat farms in South Korea, with farmers transitioning into such trades as water delivery, mushroom growing and parsley farming.

The farmers are drawn to the program due to the fact that the dog meat industry is “declining,” as one farmer put it.

“These days so few people want to eat dog that I’m actually losing money,” says the farmer from the farm where Jack was kept. So, when he heard about HSI’s program, he was eager to learn more. “I’ve wanted to stop dog farming for a while,” he says, “but I didn’t know how to make it happen until a former dog farmer told me about HSI turning dog farms into new businesses. It’s not just about saving the dogs but about helping us farmers too, and I appreciate that.”

The tide of public opinion is changing, says Kelly O’Meara, HSI vice president of companion animals and engagement. The dog meat industry, she says, is losing its appeal, fueled greatly by the publicity surrounding the dog meat farm rescues. “People are seeing this firsthand, and they are horrified,” says O’Meara.

As a result, dogs like Jack are getting a second chance; although, the transition is not always easy.

“We were very forthcoming with people who were interested in adopting them that they didn’t fully understand how to be a dog in a pet environment,” says Kowalski. “We did the best we could with the time we had.”

Besides being spayed/neutered, microchipped and vaccinated, the dogs began the process of adjusting to life as a pet, such as wearing and walking on a leash, having a bath, and being groomed in general. Jack, with his abundance of matted fur, needed grooming desperately. Afterward, “He was half the dog he was before,” says Kowalski.

The dogs at HSWC were all quickly adopted out with the exception of the other adult dog who went into a foster home and needed more focused care. The rest all found homes.

Jack too. He now lives in a big, roomy house in Annapolis with three human boy siblings, Aiden, 11, Mason, 9, and Reece, 8, and a rescue dog sibling, a lab named Chaser, and a rescue cat sibling named Mo-Mo. The family, which also includes couple Lizzy Barnes and Len Ference, were not sure they wanted to add to their bustling family. Well, Ference wasn’t sure.

“He was adamant he didn’t want another dog,” says Barnes with a laugh, as Jack snuggled up contentedly in her lap and often reached up to lick her face.

Then, Barnes shared the story of the South Korean rescue and a picture of Jack with Ference. He quickly changed his mind. “After all this little guy has been through, how could we not?” he says.

However, meeting Jack at HSWC was full of anticipation. Coming from his circumstances, how would he react to his new family? And while Jack was understandably shy at first, their concerns were quickly put to rest. Walking outside with Jack on a leash, just the two of them, Barnes was pleased to see how calm he was. And then there was the car trip home with Jack on Barnes’ lap. “That’s when the real bonding began,” says Ference.

Once home, Jack and Chaser quickly took to each other. “One of my favorite moments is seeing them sleeping together on the couch with Chaser rest-ing his head on Jack,” says Barnes.

The cat, Mo-Mo, was a bit more hesitant, given Jack’s delight in chasing her. After being confined in a cramped cage for so long, Jack seems to relish his freedom. “We have a big yard and Jack loves exploring every tree, every bush,” says Ference.

With Jack now part of the family, Ference says he certainly has no regrets. “This was the right thing to do,” he says, watching Jack scamper about happily. “Absolutely.”

Miller knew it all along. “I knew once a family found him,” says Miller, “they would fall in love with him just like I did.”