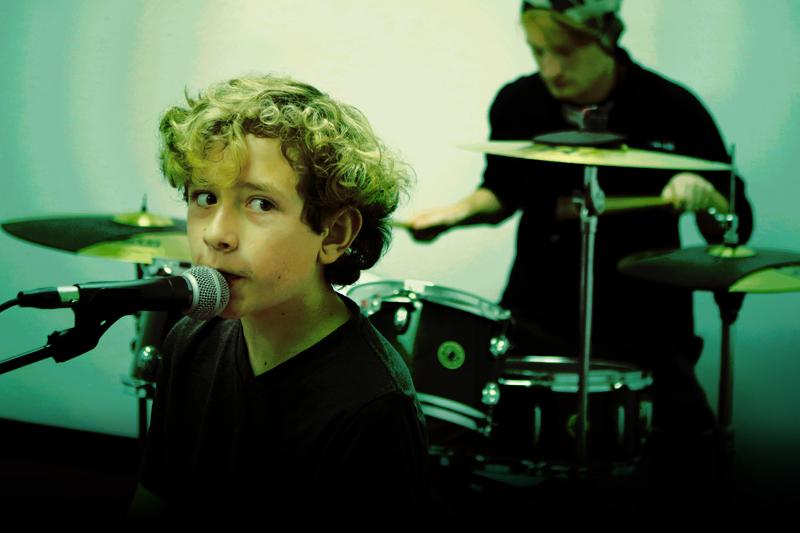 The Maryland Institute of Music, a school where the teachers are real rock stars!

By Lisa Gregory and photos by Ashley Bailey Photography

Over the door at the Maryland Institute of Music there could be a banner that reads, “All Dreams and Aspirations Welcome.”  There isn’t. But there could be. Because it’s true.

From a woman who lost her sight and wanted to learn to play guitar, to the young people with rock and roll dreams who want to learn the ins and outs of the industry – the Maryland Institute of Music provides the tools and guidance to help realize those ambitions.

“To me, music is one of the most important things in my life,” says Rik Parks, who opened the music school two years ago.

He wanted to share that passion with others. And today the institute has approximately 110 students, doubling its numbers since it first opened its doors. Participants in the program can range in age from 3 years old to 75 years old, and can include beginning musicians as well as more advanced musicians.

Parks knew early on he was on to something. “I launched the Facebook site before we actually opened our doors and the response was over-whelming,” he says. “We had over 2,000 likes in the first week.”

After a similar school in Hagerstown closed, Rik and his wife Traci decided to take the plunge. “She said, ‘You know we should open a school,’” he recalls. “I thought about it. I’ve been around people in the music world pretty much all my life. I figured we can do this. We decided to give it a shot.”

In fact, Parks comes with extensive experience in the industry, having been in a band of his own as well as working as a promoter and manager. And he wasn’t the only family member to bring talent and knowledge along with him. His son Justin, now 26, is a gifted guitarist who had been working at the other school before it closed and is now teaching at the institute.

“It just seemed like all the pieces came together,” says Parks.

That included calling upon rock and roll talent to be affiliated with and teach at the institute. A long-time friend of Kix singer and frontman Steve Whiteman, as well as other members of the band, Parks approached him and his band mates about the idea of the school and teaching there.

Whiteman had already been teaching on his own for the last two decades, focusing mainly on vocals lessons and working with such students as Lzzy Hale of Halestorm. “I told Rik you get me the students, and I’ll jump on it,” he says.

Other Kix members who teach at the school are guitarist Brian Forsythe and drummer Jimmy Chalfant. And they, including White-man and Justin, are among the 12 instructors in all at the institute, which offers lessons in vocals, keyboards, guitar, bass, banjo, harmonica, mandolin, violin and drums.

But the education doesn’t stop with learning how to play instruments. An important part of the institute is enabling those who want to have a real band experience the opportunity to do so.

“A lot of places will just teach them their instruments. Then, it’s like, what do we do now?” says Parks. “We teach them what they do now. We’re teaching them what it’s like to be a musician and play in rock bands. We have real rock stars here. Kix is a platinum-selling band. They went from the basement to the big stages. They are always open to letting the students pick their brains and ask them anything. And they do.”

Adds Whiteman, “They will ask me how to handle a crowd in live situations, how to prepare for shows, how to relate to audiences. Those are the type of questions I get.”

Students can come together to form bands after approximately 12 weeks. And they are introduced to the real world from start to finish. “We want them to know every aspect,” says Parks. Such as, “How to book shows, how to deal with talent buyers and festival organizers and bar owners,” he says.

Institute bands such as Leather Leaf, Paradox, and Amnesia have cut their musical chops playing at local venues and festivals and sometimes even opening for Kix. “I was extremely nervous,” admits student Payton Waltz, a drummer in the institute’s band, Amnesia, of opening for the band. “But also, very excited. “

Payton, 13, fell in love with the idea of being a drummer for a rock band when she was 4 and attending her first concert at a Skillet show. “Their drummer is female,” she says of Skillet drummer Jen Ledger. “That sparked something inside me.”

The institute, says Payton’s mother, Stephanie Moyer, has enabled Payton to continue to hone her craft and reach for her dream. “It gives her the opportunity to be around working musicians and have that exposure to the music scene,” says Moyer.

Something that fellow student Caleb Bachtell, 15, appreciates as well and for a variety of reasons.

“I admire Steve from the bottom of my heart,” he says of Whiteman. “Not because of his social status but because how hard he works and how dedicated he is to music. When I first met him, I was like, ’Wow, I’m about to take a vocal lesson with a rock star.’ But it’s really more about him being a genuine person which he definitely is. He has taught me a lot.”

Caleb, who is a guitarist and also sings, is in two institute bands, Leather Leaf and Paradox. For him, the band experience has been especially beneficial.

“I’m a firm believer in chemistry,” he says. “I feel like you need to learn how to get along with other people who play different instruments. If you can’t figure out how you fit into that, it doesn’t work. So, I think the band portion is really helpful.”

And that chemistry can seep into other parts of the students’ lives as well, according to Parks. “We have a band in there right now, four students,” says Parks of the group practicing in a nearby room. “All four of them are from such different walks of life. But they have jelled together so much that they are actually getting together outside of the school now at their houses to play music.”

And those connections are not only confined to a band experience. Forty-three-year-old Jessie Stine is not in a band. But she is no less passionate about her experience with the institute. Stine, who is blind, wanted to learn to play the guitar, a long-held desire of hers. However, when she looked for an instructor, people were hesitant.

When she met with him last summer, “he said he wasn’t sure they could help me,” recalls Stine, who was diagnosed with retinitis pigmentosa, a degenerative condition, when she was 16. “He told me that they had never taught a blind person or worked with a person with a disability.”

However, “they were willing to try,” she says with a smile.

And the endeavor has proven to be successful. Stine takes lessons with Rik’s son Justin. The two have created quite the bond as they have worked together searching for the best way to teach her to play. “I was very nervous the first day,” she says. “I kept thinking, ‘how’s this going to work?’” But, “We clicked right away,” she says. “We joke with each other all the time. And he is so patient and so willing to think outside the box.”

Which has resulted in adjustments such as putting tape on the frets of the neck of the guitar so that Stine knows where to place her fingers. And, “he is very good at explaining things to me,” she says.

The experience has had quite an impact on her. “It has given me self-confidence,” says Stine, who is currently mastering the Queen song “Another One Bites the Dust.” “I feel good about myself. I look forward to going to the lessons.”

And Parks looks forward to seeing the glow on her face when she walks out of that lesson. “We have students like Jesse who come in, not knowing anything or barely knowing anything, and then after a short time with an instructor they get it,” he says. “It’s such a great feeling.”

And one that is not to be had only within the physical limits of the institute itself, but across the globe. The institute offers live video lessons. And Parks recently received an email from a young woman in Romania who wanted to take vocal lessons with Whiteman.

As he talks about the potential new student, he points to a quote by Robert Plant of Led Zeppelin, which is etched on the institute’s wall and reads “Music is for every single person that walks the planet.”

As such, Parks has big plans for the institute and its future. He would like to open a second school. And he has high hopes for the students who come through the institute.

“As far as seeing some of them on the big stage,” he says, “we absolutely expect it and are looking forward to it.”