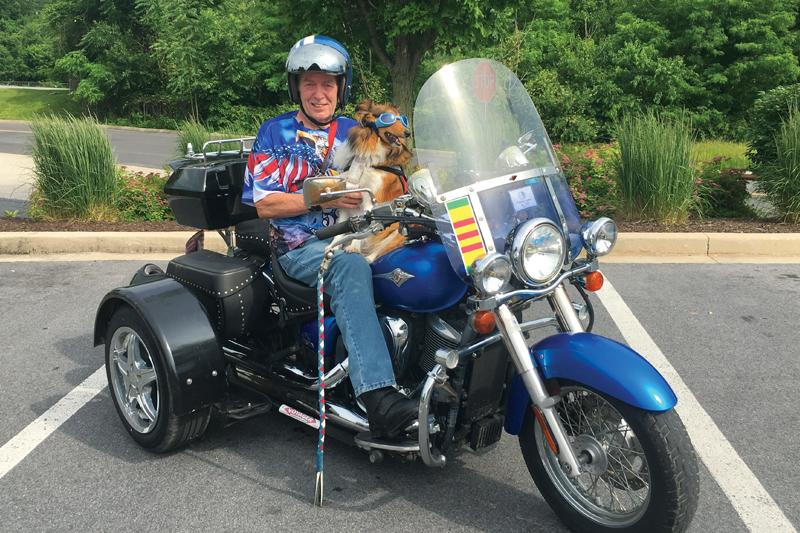 How a man called T.J. and his dog Malachi are living their best life.

Story and photos by Angela Niessner

On a warm and sunny day in late April, I pulled into a Sheetz station to fill my gas tank before leaving Hagerstown. It had been a long day full of disappointments. It seemed nothing had gone right, and I was perfectly exhausted. I had a case of the “blues” and only wanted to get home and put the whole day behind me.

When I pulled up and started filling my tank, I noticed a rather unusual vehicle at the pump on the opposite side of mine. It was a big motorcycle of some kind, but not like any I had ever seen before. This motorcycle had additional wheels on the back. They were very much like training wheels, but super fortified training wheels! It was amazing. Naturally, I had to look to see who was driving this thing. There I saw a beautiful little Sheltie dog on the motorcycle seat, wearing a vest and shaded eye-goggles! He was sitting just in front of a tall, slim, gray-haired man in a helmet, who also wore a vest. I smiled at the man, said hello, and complimented him on having such a lovely riding companion. He smiled warmly as he returned my greeting. I introduced myself and asked his name, to which he replied, “T.J. Lange, ma’am, and this is Malachi.” The tender way he stroked the little dog who was so at home up there on his motorcycle, and the loving way they looked at each other just melted my heart. It was clear to see that these two were a special pair who had a deep connection.

There were colors decorating the front of the motorcycle that I would later learn represented the Vietnam flag.

Both T.J. and little Malachi were utterly charming. During our meeting and in the few minutes we spent there at the gas pump, the “blues” I came in with were washed away. They were completely forgotten and instead of feeling tired and depressed, I was feeling inspired and blessed!

We exchanged phone numbers before we parted and within a few weeks we arranged to meet for lunch where we could get better acquainted as new friends. I had asked T.J. if he would be willing to share more about himself for Hagerstown Magazine and he happily agreed.

Let me tell you about this man and his little dog who rides around Hagerstown with him on a motorcycle with training wheels.

Timothy Joseph Lange, also known as “T.J.” was born in Washington, D.C., on Oct. 5, 1949, to alcoholic parents. He was one of the oldest of their eight children. He and his brother were taken from the home when T.J. was still in diapers because they were not being properly taken care of. After a year or so, the boys were returned to their parents where they lived in the projects and where T.J. remained until he was about 13 years old. At that time, his married sister and her husband took him to live with them and their four children in Chewsville. He had gotten into trouble with a friend and was before a judge when his sister came into the courtroom. She approached the bench and said she would take her brother out of D.C. and the judge agreed. T.J. recalled this as the time his sister saved him from possibly going to reform school.

Sadly, she and her husband were alcoholics as well, and at just 17 years old, T.J. was enlisting in the Army to get away from the drinking. There was already a war going on in Vietnam. In August of 1967 he joined the Army, went to boot camp at Fort Bragg and arrived in Vietnam on January 4, 1968. The Tet Offensive started on Jan. 27, just a few weeks after he got there.

Once in Vietnam, T.J. was assigned to latrine duty for a while. He remembers that job as his very favorite job while over there. It was not particularly dangerous or stressful, and allowed him plenty of time to relax. It didn’t last long, though. After an accident resulted in the latrine burning down, the Army found another job for young T.J. Soon he was assigned to be a Radio Transmitter Operator carrying orders to foreign observers. After that he would become a door gunner, shooting out of the door of a helicopter. He was even shot down four times while performing his duties. In the year 1970, he joined the 82nd Airborne, and started jumping out of helicopters. He did this for several years, which was both dangerous and very hard on his body, especially his knees.

He remained in the Army until 1984, when he was discharged with a permanent profile in which he was identified as no longer able to serve due to his badly damaged knees.

The entire Vietnam experience was full of physical and emotional trauma for T.J., although he didn’t try to list them all during our time together. So much trauma, in fact, that after returning home he suffered a breakdown and was admitted to the Veterans Administration Hospital for 30 days. This happened more than once. Each time he would be kept for the full 30 days and was finally given 100 percent disability benefits due to his physical injuries and severe post-traumatic stress disorder.

His life was forever changed by the sacrifices he made while serving his country. It cost him his marriage as a young man whose wife couldn’t cope with the effects of the war on her husband. You will never see him sit in a room with his back to the door where someone could surprise him from behind. Sudden loud noises are now potential triggers to great stress and terror. Although he is a patriot who loves his country, you will not see him at the fireworks display celebrating the 4th of July.

T.J. receives medication and counseling to treat his conditions, and he also has been prescribed a steady dose of Malachi. Malachi is a service dog with special training who provides T.J. with comfort, companionship and much more. He is a constant in T.J.’s life and goes with him everywhere. He is devoted to his master and to his duty to him. Malachi is trained to recognize when T.J. is in distress, and to respond appropriately. He wears a vest that bears his official service dog identification so that he will always be welcome wherever they go together. T.J. has a heavy-duty safety strap around his neck that is securely attached to Malachi’s harness when he is riding on the motorcycle with him. Do not fear!  While he is in his harness strapped to T.J., there is no possibility that Malachi could ever fall from the motorcycle.

It’s a beautiful thing to see the way this man and his dog interact together. Their love for one another is a joy to behold. What can life offer to a person when he has endured hardships and heartache from the time he was born and has then gone on to witness the terrible inhumanity of war in a foreign country? In this case, the answer is love. It’s the ever-present love of Malachi that soothes and helps brings peace to this remarkable man. It’s a part of what gives him the ability to meet people with a smile and an open heart, even though much of the time life has been less than kind to him.

Keep your eyes peeled for a Kawasaki Vulcan 900 fitted with an extra pair of wheels on the rear and you might spot Malachi riding through town, wearing those cute doggie goggles! T.J. and Malachi are well known and loved in Hagerstown, and both are well received all over the city. Malachi likes to ride with T.J., go to restaurants with T.J., visit friends or just stay home and watch television with T.J.! He’s particularly fond of watching Animal Planet.

You might see them just about anywhere, even on an overnight camp out in Cunningham Falls State Park in T.J.’s nifty little camper. When you do, say Hi for me!