Let the Music Play On 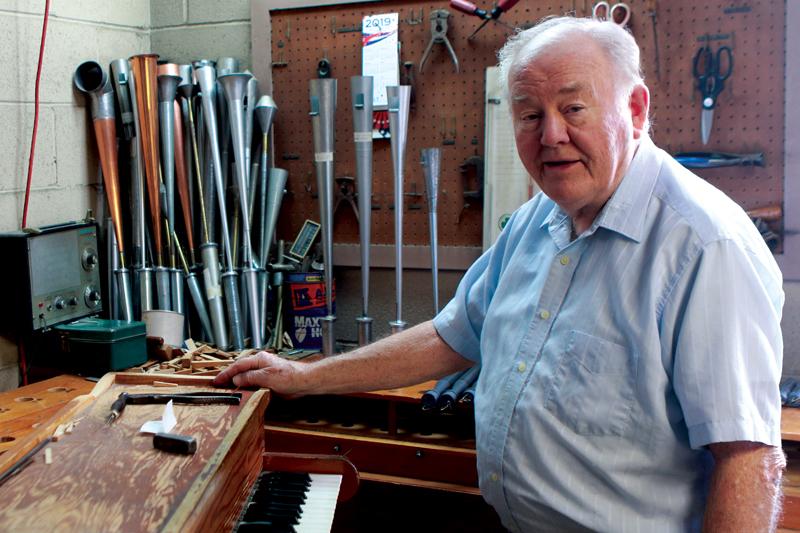 By Karen Gardner and photos by Ashley Bailey Photography

Hagerstown’s Trivo Company employees keep the pipes playing for organs in Washington County and around the country.

Organs are a fast-disappearing part of Americana. Organ music once emanated from churches, music halls, old movie theaters and ballparks. These rich sounds from pipe organs still resonate, however, in many churches and music halls in Washington County and around the country.

Even though the legendary Moller Organ, one of the country’s premier organ makers, closed its Hagerstown factory for good in 1994, pipe organs made by Moller and other manufacturers still pump out tunes.

Joe Clipp, his son Lyndell, and three other employees keep the pipes in working order for many of those organs. They do this in their three-story, concrete block building on Burhans Boulevard. Clipp spends much of his time in a small office where he tests the sound quality of each pipe. Then he works out how to repair and refurbish the pipes. Some pipes are better off being replaced, however. Trivo does that, too.

Trivo is one of only a few dozen companies left in the United States that restores the pipes that give organs their rich, tonal sound. Many organ pipes rise up vertically behind the instrument, often enclosed behind a screen. Others extend horizontally. Trivo restores any pipe organ, but specializes in these horizontal pipes. Horizontal pipes, which typically have the trumpet sound, make it easier to get a pipe organ into a small building, like many smaller churches in Washington County.

Although a pipe can be anywhere from 2 feet to 12 feet or more, the sound starts with a tiny tongue that’s no larger than a paper clip. “You have to work a curvature into the tongue,” Clipp said. He inserts the tongue into a pipe, and air is blown through the pipe. He listens for the optic, the pitch, the quickness, and the texture of the sound. “You want it to speak.” By listening to the sound, Clipp can tell how much to adjust the curvature of the tiny tongue.

In the corner of the room are a series of sample pipes. “That’s to show the difference in sound,” Clipp said. “If the customer says ‘I want a set of pipes like so,’ then we can show them the different sounds.”

The sounds of a pipe depend on several tiny parts inside the pipe. The curved tongue lays against a flat shallot face, which is not much bigger than the tongue. The shallot produces the volume, the texture and the speed of the sound the organ produces. The tongue and shallot faces need to be either cleaned or replaced when a pipe is restored. Then there’s the tuning wire, which often needs to be changed. The tuning wire allows the tongue to vibrate, which determines the octave.

“The tuning wire must be properly positioned against the tongue,” Clipp said. “Sometimes it loses tension, which means it doesn’t hold the tongue tight against the shallot face, and it throws the sound off.” Cleaning and reproducing these tiny organ parts requires the patient, precise moves that Clipp has perfected over the years.

Clipp, 82, lives on Trego Road south of Keedysville. He’s spent most of his life working around organs, and Lyndell has only ever worked in his dad’s business. Lyndell started working for his dad part time at age 13, and he’s been there full time ever since he graduated high school in the late 1970s.

Clipp started Trivo with two friends in 1963. All three worked full time at Moller Organ. At night and on weekends, they’d do jobs the larger organ maker rejected. One of the company’s early jobs was to clean the reed pipes of the National Cathedral in Washington.

“We would fill the old truck with pipes on a Friday night and bring them to our little workshop in Hagerstown for cleaning and refurbishing,” Clipp said.

The three founders incorporated their side business in 1969, and left Moller in 1972. At its peak, Trivo had 13 employees. One of the founders, Edward Lushbaugh, sold his share of the company in 1980. Clipp and his partner, Homer Lewis, continued the business until Lewis retired. Clipp now runs the business with the help of his son and small staff.

Clipp’s expert ear listens for sound produced by a pipe with a new tongue and shallot. To make the sound, air is pushed through the pipes when a lever is depressed.

“The air is produced by a blower with only one-tenth of a pound of pressure,” Clipp said. “It’s the volume of air, not the pressure. Air is stored in a reservoir and weighed, so it’s consistent.” Demonstrating the pipes, he said, “These pipes work off three-and-a-half inches of wind.” It’s that volume of air released when the key is pressed that creates the pressure. The sounds of horns require a different amount of air than the sound of a clarinet, for example.

Trivo recently restored pipes for the large organ inside the Hood College chapel, using a bucket lift with a rope to get the pipes in place once the job was finished.

Besides restoring or making new tongues and shallots, the staff at Trivo do a lot of cleaning up of pipes. “We get a lot of old pipes that are dirty,” Clipp said. They repair and replace old lead pipes and old wooden pipes. Lyndell Clipp uses a soldering tool to join the pipe edges for a pipe that will keep an old organ going for another 50 years, if it’s cared for.

“An organ will mimic the sound of a complete orchestra,” Joe Clipp said. Thanks to Trivo, many of these organs will continue to play well into the 21st century.